Let’s just be up-front here: I don’t have appointment television anymore that isn’t sports-related. That being said, The Walking Dead is as close as it gets for me. I spent a couple weekends pounding through season two on Netflix before purchasing season three and catching up before the first episode of the current season. Since then I’ve been at most a day behind any new episode. And I’m glad I caught up. Had I been behind and not watched Sunday night’s “The Grove” as soon as I did, I would have felt behind on all the awesome.

***This is where the spoiling begins. Your eyes have been appropriately warned.***

In line with what we’ve seen since the group’s exodus from the prison, I was expecting another episode of strong character development, but one that would ultimately end with Carol, Tyrese, and the various little ladies making their way towards the mysterious Terminus. And it sure started that way. The group found a somehow livable house, complete with not-god-awful fencing, an actual water supply, and a healthy surplus of pecans. Hell, compared to what we’ve been seeing on that show for four seasons, it seemed like heaven.

I was settling in for a relatively lighter episode in this idyllic setting. I know Lizzy has been a problem child for some time (her near suffocation of baby Judith sorta locked that status in), but I didn’t think it would come to a head the way it did. Especially not with how adorable and innocent Mika was in this episode. (Seriously. I was exclaiming her adorbz-ness at my TV.) The house would provide a logical backdrop for some event or revelation that would ensure the group would continue (mostly intact) towards their ultimate destination.

We were getting great moments that made you feel like this group could make it out unscathed. Mika shot a zombie (eventually), saving her sister and baby Judith. Carol and Tyrese shared a moment by a large tree. (You know, how adults do.) Mika’s near-death at the hands of the undead seemed to have shaken Lizzy, but I couldn’t be certain that she really knew what was happening (’cause she’s batshit crazy). But I assumed it would stave off the crazy for a few episodes longer, until she met up with the rest of the group. (Where I thought Carl would end up taking things into his own hands, similar to an event in the comic series.)

And then it happened.

That was my audible reaction to seeing Lizzy’s bloody hands, Mika’s lifeless body on the ground behind her. Suddenly this episode wasn’t developing characters, but completing them.

See, for a while I was thinking that maybe Carol had lied about killing Karen and what’s-his-face. (David? Sure. David.) I was thinking she had been covering up for Lizzy’s first crime against humanity. I was wrong there too. Not only did we see Lizzy’s truly horrific descent, but they even gave us a clear, evidence-based reason to once and for all know that Carol was responsible for the earlier kills: Lizzy would have let Karen and David turn. No longer creepily toying with rabbits and feeding zombies, the big sister finally let her psychosis show when she killed Mika in order to “turn” her. Because all the zombies want are friends that are just like they are. This was undoubtedly one of the creepiest instances of zombie empathy I’ve ever seen. (Evident by how many times I proclaimed how “fucked UP” she was.) 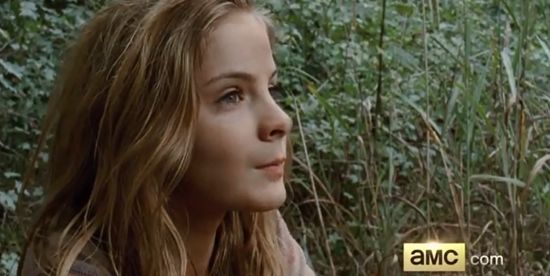 It’s one thing to have killed zombie Sophia early in the series. It made sense to us. She wasn’t a person by that point anymore. But for them to have one sister stab the other to death? That’s something else entirely. It was murder. (And I always say a show/movie has major huevos when it decides to kill a kid.) And then Carol and Tyrese were forced to come to the same conclusion that we all did: that Lizzy wasn’t fit to be in society, even if it’s the damaged version of it this show portrays.

And then the show went there. Tyrese watches from a window with a baby in his arms as Carol walks Lizzy out to the backyard, near a flower patch. It is there Lizzy realizes Carol is mad at her, but she’s still not fully understanding why. Lizzy assumes its because she pointed a gun at Carol, not that she killed her sister. As Lizzy begins to weep and show more emotion than she has in her entire time in the series, Carol tells her to “look at the flowers,” a call-back to how Mika would help Lizzy re-center following her emotional breaks. But when Carol goes for the gun at her belt, we all knew how this was going to end.

One gunshot was all that was necessary for the series to deliver one of its most chilling and emotionally charged moments. “The Grove” was no longer just a rest stop episode on the way to the finish line. It was a finish line.

This is why I love The Walking Dead. It has never relented in its pursuit of these seminal moments, no matter how graphic they are. It is always finding new ways to depress us, while at the same time tempting us with light at the end of an ever-darkening tunnel. They may have veered away from certain pivotal situations on which the comic series focused, but no longer can we claim that’s due to a “copping out” on AMC’s part. Rest assured, this version of The Walking Dead will pull no punches.

Let us know your reaction to “The Grove” below!