We do it every year. The Super Bowl rolls around and the casual and hardcore gamblers all swarm the bookies, taking advantage of the sheer volume of possible wagers to make. Aside from betting on the actual winner, there are “proposition bets”, which are novelty wagers, essentially. Sometimes the prop bets are game-related, like most receiving yards or if a specific player will score a touchdown. Those are fun, sure. But I’m really into off-the-wall bets that are just begging to take my stupid money.

*Here’s a short lesson for those of you that aren’t knee-deep in betting and don’t know what the hell some of this will mean. Betting odds are presented in a few different ways.

Odds: The old standard. When you see 3/8 odds, that means the bookkeeper will take a eight dollar stake (your initial bet) in order to return three dollars, plus your original eight. So you can will $11 altogether.

Over/Under: This is the simplest way of betting as far as I’m concerned. You’re just taking the over or under on a given stat or calculatable event in the game. Like say the over/under on total touchdowns scored in the game is 3.5. By taking the under, you’re saying three or less touchdowns will be scored, and opposite if you take the over. Over/unders can be a whole number as well. If the O/U was 4 touchdowns and that’s what it ends up being (known as a push), then no one gets the money, unless you bet on the push.

Money Line: This one is a little complex. Here’s a random example:
Chicago Bulls: -180
Milwaukee Bucks: +250

In the above line, the Bulls are the favorite (denoted by the negative) and the Bucks are the underdog (plus). A bettor would need to plop down $180 on the Bulls in order to win $100. For the Bucks, putting down $100 would net you $250. You don’t have to put down $100, but this is the way the math is easiest to present.

Okay, you’re a betting pro now. Let’s take a look at some of the best Super Bowl Prop Bets, courtesy of Bovada.

How many times will Peyton Manning say “Omaha!”
Over/under: 27.5

Mostly Average Take: Shut up. Only 27.5??? He said it like, 44 times in the AFC title game! The over. All day. The over. Unless he’s being super crafty and has changed it to “Papa John’s” or something.

Mostly Average Take: A quick Googling reveals Renee is an outrageously successful opera singer. Props to the NFL for offering a different take on the national anthem. That being said, I still want to see Grace Potter. Oh, I suppose the over. I mean, why not Shatner the hell out of it?

Mostly Average Take: See above note about being an opera singer. This lady ain’t gonna forget a word. She’s a professional.

Mostly Average Take: It’s one of my favorite GIF’s ever so I’m happy to use it again. I can only hope he unleashes the full force of those tear ducts and floods the stadium.

Mostly Average Take: These really just go hand-in-hand. I assume they’ll be right next to each other (and so does Vegas, hence the identical lines), so this is an easy over for me.

Which sideline reporter will be seen first after kickoff?
Erin Andrews: -140
Pam Oliver: Even

Mostly Average Take: Pam Oliver’s crazy hair should NOT be first seen during the Super Bowl. No offense Pam, but that hair can be frightening. 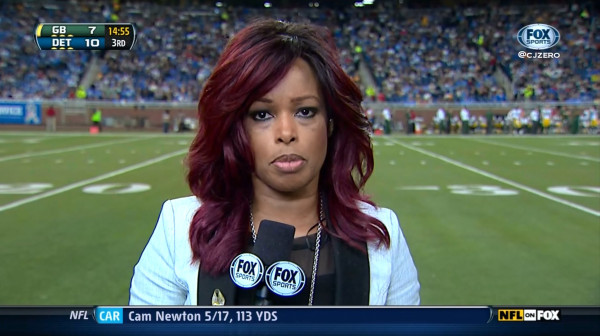 And this is one of her better hair days.

Mostly Average Take: If this a thug bet or something? He’s more likely to get a pass interference call, not a taunting penalty. I’m saying no. (So it’s not worth betting on.)

Will Richard Sherman be interviewed by Erin Andrews on the field after the game on the FOX broadcast?
Yes: +250
No: -400

Mostly Average Take: This is sort of dependent on the Seahawks winning, otherwise Sherman won’t be interviewed on the field (more likely in the locker room, and not by Erin Andrews). It might be a clusterf*ck on the field afterwards, but FOX would be moronic if they couldn’t make this happen. We all need a chance for Sherman to make his face turn.

Mostly Average Take: Oh Wes. Both sides have gotten a decent amount of action, apparently. But I’m totally going yes. His hands aren’t as good as everyone would think.

Mostly Average Take:  This is tricky. He threw a pick-six in his last Super Bowl to lose the game, and he’s liable to throw a few shitty passes towards this ball-hawking Seattle secondary. I might take a $20 flier on this just to see what happens.

Will Percy Harvin be injured in the game? (Must be relayed by sideline reports and he can’t return to the game.)
Yes: +300
No: -500

Mostly Average Take: I’m surprised yes is only +300, to be honest. Dude’s made of construction paper.

Will any member of the Red Hot Chili Peppers be shirtless during the halftime show?
Yes: -250
No: +170

Mostly Average Take: Anthony Kiedis and Flea will be onstage. And they’re both crazy. I’m staying away from this prop bet.

Mostly Average Take: I had to go digging for these lines. (Also for what the hell a “tuque” was.) Anyways, I’m thinking no hat is the winner here. A fedora just doesn’t feel right for the weather, but why would he cover up those curly locks with a fur hat? Let it all hang out Bruno. 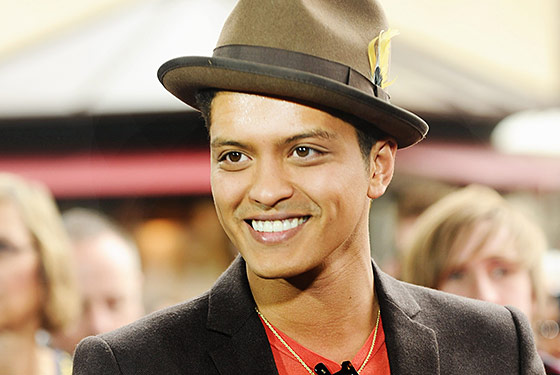 But don’t we all WANT the fedora?

Mostly Average Take: This is one of those annual prop bets that always keeps us guessing. A few days ago (before I saw the odds), I figured orange would be a dark horse. But it’s the favorite. Hell. This means I really know too much about football. 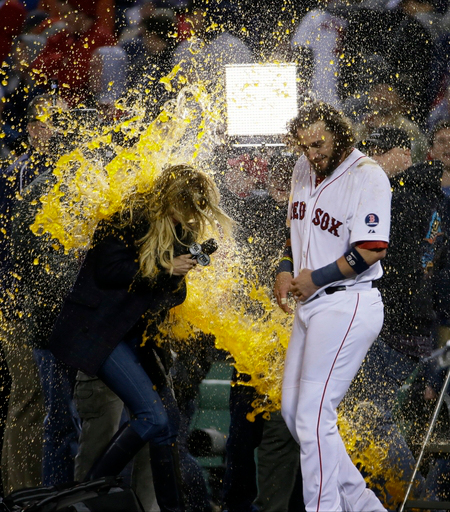 Erin Andrews has already been hit with a few Gatorade baths. She’ll probably avoid one at the Super Bowl.

Alrighty, that’s it for now! Check back later today for the final (football) post before Super Bowl 48, The Opening Drive!