Week five in the NFL is upon us. We’ve got divisional contests and a plethora of evenly matched games on the schedule. I’m here to squib kick The Opening Drive!

Another week, another near-miss for Rob Gronkowski and the Gameday roster. Oh wells. Tom Brady will have Danny Amendola coming out of the slot after he missed the last three weeks. I give Amendola 2 1/12 quarters before he tweaks something else. Still, with him on the field and the steadily improving crop of young wide-outs, the Patriot offense should be up and running. The defense, however, will look drastically different without Vince Wilfork. Look for more 4-3 sets to help disguise the big man’s absence.

This NFC North rivalry will have a different look on Sunday. The Lions are in first place and the Packers are fighting to get to .500. Coming off a bye week and playing at home, I’d give the Packers the edge in being able to take advantage of a weak Detroit secondary. The Packers started 1-2 last year as well, so this is not uncharted territory. If they lose, look for signs of trouble in Packer-land. They’re supposed to be a contender.

This is very fascinating game, and almost no one will watch it. Without Jake Locker (sidelined for several weeks with a hip injury), the Titans will be forced to turn to Ryan Fitzpatrick to lead them against the undefeated Chiefs. With Fitzpatrick at the helm, the Titans can’t afford to become pass-happy. Chris Johnson must actually show up. Otherwise his quarterback is likely to commit poorly-timed turnovers like the ones that plagued his last season in Buffalo. The KC defense is extremely talented and doesn’t let points on the board. Tennessee is tough, but they might not have the play-makers to pull out the win.

Seattle is going to lose a game on the road at some point. It’s inevitable. Indy is a quality opponent with respectable wins already on their short 2013 resume. The Colt running game will be pivotal in any strategy that avoids challenging the Seahawk secondary. Andrew Luck has been good leading his team this season, but the’s not putting up numbers that are all that impressive. The Colts can’t turn the ball over to Seattle if they’re expecting to earn a home win.

Okay, someone in Vegas really needs to explain to me how the Rams opened as a double-digit favorite in this game. Because I just don’t see it. I know the Jags are turrible, but are they so bad that they can’t stay within 12 points of St. Louis? The Rams have an inept offense, once that has scored only 18 points in their past two games. If the Jaguars are winning a game this season, this is likely their best chance.

Defenses, y’all. This game has ’em. But it also features quarterbacks that combined for eight turnovers in week four. So… I’m pretty sure that this could be one ugly game. The Ravens and Dolphins are both fighting for legitimacy in the AFC, but the Ravens are reeling. Falling to 2-3 would be more than disappointing.

NFC East suckfest! Let’s do this. I’m hoping for at least eight turnovers, five of which will probably come from the Giants. Oddly enough, these teams aren’t out of it completely… yet. If the Giants lose to a division rival and drop to 0-5, watch out for changes in New York.

Someone cares about this game, right? I mean… anyone? Someone? Bueller? (Sorry if you do, but I do not have the wherewithal to cover it right now.)

So the Broncos are steam-rolling through opponents on a weekly basis now. The Cowboys have struggled to pick up momentum, alternating wins and losses. This will be the most difficult test of the Cowboys and will really show if they’re a contender or just the leader in a shitty-team sack race.

These two teams are fighting to stay afloat in their respective divisions, where “upstarts” are slowly pulling away in the title race. The Texans’ Matt Schaub has come under tremendous criticism as of late following three pick-sixes in three games. Going into San Francisco isn’t the best of circumstances. The Niners pummeled the Rams last week and are expecting to continue their success. If tight end Vernon Davis is healthier than he was in week four, Texan LB Brian Cushing may not be able to cover him effectively. More Tee Tiddy’s for the tight end.

Thanks to the freakin’ MLB playoffs, this game will air late night on NFL Network, giving us four games on Sunday. Well that’s just unnecessary. There’s no way I’ll watch this game live, but it will surely be on my DVR for a AFC West-flavored treat for Tuesday night. Anyway, I’d love to predict a Philip Rivers-implosion here (it would be precisely this kind of game that he would blow up in), especially with the return of QB Terrelle Pryor to the Raiders’ starting line-up. But the Chargers have been respectable, so I’ll just quietly wish upon a star.

Monday Night Football graces us with this effort, a game between a contender on the ropes and a messy offense led by a turnover-prone rookie quarterback. I guess I’ve seen worse Monday night match-ups. (Denver-Oakland anyone?) The Jet defense is quietly stout, but they have to create turnovers to give their offense a chance to outscore the Falcons. A healthier Roddy White and Julio Jones along with Tony Gonzalez means Matt Ryan has a full complement of weapons. Which is, let’s say, a lot more than the Jets have. 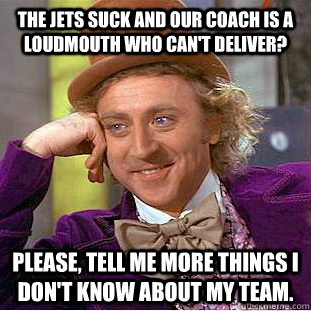 That’s it. No more previews for you! (Well, unless you’re waiting for my Bears Gameday preview. That’s still coming. So you know, wait for it.)