So normally I would have posted this article five minutes after the video went up, but this week was all about catching up on some of those “other” articles on which I should be working. But let’s be fair, if I do something else on this website besides expressing my worthless football opinions, it’s talking Katy Perry. And wouldn’t you know, she has a new video. And I’ve been waiting for it since its performance at the Grammy’s (which you should watch because it too is crazy hot).

Let’s watch some “Dark Horse,” shall we? (And dear god don’t watch this on YouTube and read any of the comments.)

Thankfully this video’s “plot” is more clear than that of “Unconditionally,” of which I couldn’t make any sense. In “Dark Horse” Katy plays as a magically-endowed (giggle) Egyptian queen meeting various suitors. One brings jewels, another brings junk food (that’s a lot of twinkies and Cheetos), another has bling and a bouncy ride. Ya know, standard fare.

Among the other things I took away from the video:

-I’ve never paid as much attention to eyeshadow as I did watching this. Those designs were intense.

-Thanks for coming on set Juicy J. I appreciate you showing up and actually being filmed with Katy. Just stand there and look cool. Awesome.

-She kills a lot of guys. With magic. That flows out of her hands. She also has a talking throne with blue glowy eyes. Like ya do. 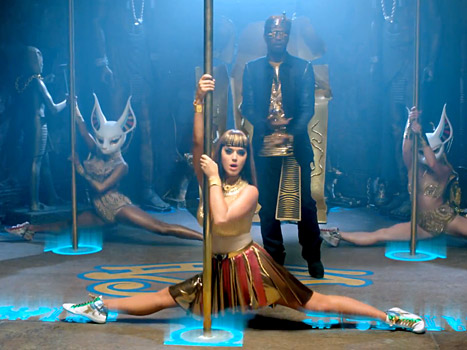 -I’m very happy the mouth grill that was teased the week before the video’s release didn’t stick around for long. That thing creeps me out.

-There’s also an adorable pomeranian, whose name is Jiff, for those of you unaware. 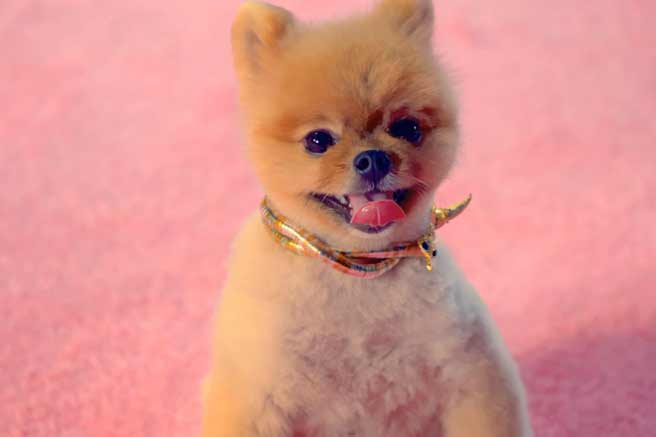 -The costumes are outrageous and colorful. Some guys are painted blue, ladies are dancing around wearing cat-heads, and they’re all wearing sneakers. What else do you want? KP’s outfits are fun too, one coming in the form of a short, white, and flowy dress that goes with her white wig emblazoned with blue hieroglyphics. She was also painted silver and wrapped in gold snakes as part of a moving wall’s inlay. Yep, it was as hot as it sounds. But I did anyone else have a nerd-moment when they saw this costume: 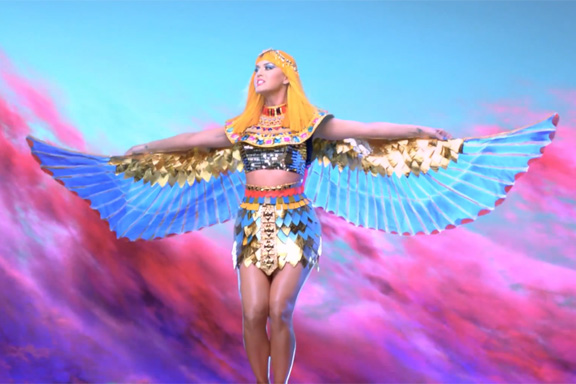 Because my immediate reaction took me back a few decades: 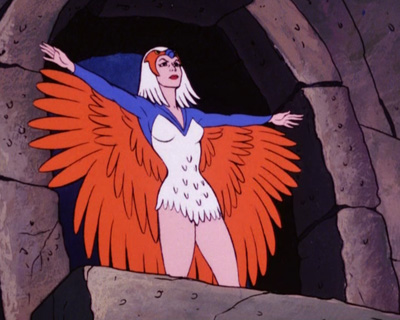 Yeah. She looks like the Sorceress from He-Man, just with a poppier color scheme. I’ll let that sink in for you.

-Personally, I enjoyed the darker, witchy version of the Grammy’s performance more, but I won’t argue against more Katy Perry snap-dancing.

Hope you enjoyed the video! But let’s be fair, I don’t care if you did. I’m watching it again right now.