Following leaks of production stills and maquette designs, TMNT-fans had an idea of what Michael Bay had in store for us in his re-boot of the classic franchise. But now we don’t have to wait any more, as the first official trailer for Teenage Mutant Ninja Turtles is here! Click that play button, shell-head.

-Okay, so it didn’t look terrible. But did anyone else think we could have substituted every shot of a turtle with a Transformer and the trailer wouldn’t have skipped a beat? Just replace the ooze canister with some techno-thingy and we’re good to go. (Megan Fox is already in it, so we’ve got that base covered.)

-I’ll say this for the character designs: they sorta look like big turtles. And I say that because the earlier film iterations of these characters were cartoonishly featured but with a more humanoid shape and really didn’t resemble the animals they were based off of aside from skin texture and green-ness. These turtles look way closer to their reptilian roots. Which of course means they look gross. A giant mutated turtle is probably not a pretty sight.

-It has been confirmed that Splinter is in the movie, so stop fretting that you didn’t see him.

-I needed more Raphael. Didn’t everyone else feel that way?

-So April’s dad once worked with the Shred-dude, and that’s plays into how the turtles were mutated. Okay, that’s cool I guess. (I’m wondering where their Japanese influence comes from…)

-The Foot clan appear to be dudes with guns and odd masks. That’s really not far off I suppose.

The trailer is surely going for as much “gritty” as it can possibly manage, but my Turtles are best served funny and with plenty of pizza. I have no doubt the movie will feature a decent amount of both. But there will also be slow-motion ramping. And Bwwwoooooowwwwww noises.

Honestly guys, I’m having a hard time deciding how I feel about this trailer. I don’t think it’s as bad as I was fearing, but I need to see more before I can claim it as appearing “promising.” I know that stance is fairly non-committal, but I’m trying not to jump to any conclusions yet.

…But they still look a little weird to me. 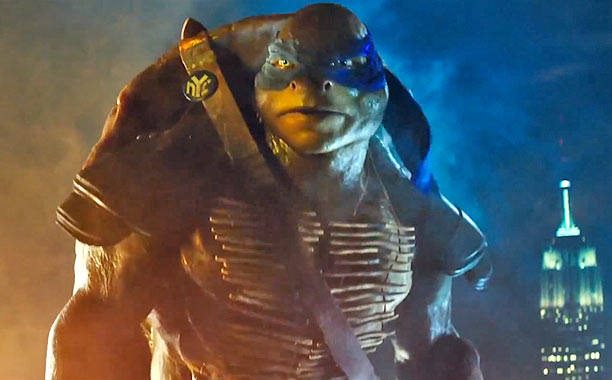 Just a little though.

Teenage Mutant Ninja Turtles is scheduled for an August 8th, 2014 release. Let us know your thoughts below! Love it? Hate it? Creeped out by it?