Week 15 in the NFL has come and gone. It’s sad, but true. Before we admit to ourselves that only two weeks in the season remain, let’s go around the league and see what made headlines over the weekend. It’s time for The Final Drive!

This was the crappiest game you’ll see from the Broncos all year. Of course this year will end and they’ll invariably derail in the postseason of January 2014. (I’m sorry, couldn’t resist.) The Chargers have made these last few weeks especially interesting, but I’m not convinced their defense can maintain that kind of intensity. Manning was obviously affected by the absence of Welker, but the absence of a running game was even more alarming. 18 rushing yards? REALLY?

Washington turned the ball over SEVEN times on Sunday. Two of those turnovers were interceptions courtesy of Kirk Cousins, who also fumbled the ball once. But two fumbles a piece from Santana Moss and Alfred Morris should have meant the Falcons were to pummel Washington. But they only won by a single point, after Cousins and company failed to convert a two-point conversion. Is anyone sold on Cousins after this? If so, you’re an idiot.

Well I’m not assuming the Texans can beat anyone for the rest of this season. If you’re not getting amped for a game against a division rival, you’ve run out of steam and are ready for the year to be over. Don’t worry Texan fans, it will be. Get ready for that number one pick, mkay?

We saw what no Gronk does for this New England offense. It causes uncharacteristic mistakes and doesn’t put a plethora of points on the board. I mean, Miami’s defense is good, sure. They manufactured a decent pass rush and bothered Brady for most of the game. But 20 points won’t be enough when the playoffs roll around. The Patriots couldn’t overtake the Broncos for the one seed, but Cincy’s result (below) means they haven’t lost the two slot.

Did y’all see Matt Asiata’s stat line? He scored three TD’s but had rushing yards 51 rushing yards on a whopping 30 carries. The Eagles should be ashamed. They luck out with injuries to Adrian Peterson AND Toby Gerhart, but get spanked by Matt Cassel, who has earned the right to start the final two games. This means the Vikings have no interest in seeing any more of Josh Freeman. He’ll be moving on this offseason. Nothing changed for the Eagles, FYI. They still control their playoff destiny.

So I predicted three Eli interceptions and four sacks. We actually got FIVE interceptions and three sacks. It was both hilarious and awful. (Mostly hilarious.) Eli looked so bad, in fact, that Curtis Painter managed to make his way onto the field in relief. Manning is now the leader in the interception clubhouse and could have a record-setting year in that category. The Giants never found their running game, totaling 25 yards on 14 carries. It was the type of abysmal performance that gets someone fired. I’m assuming it’s offensive coordinator Kevin Gilbride, at the very least. Tom Coughlin’s team seems lost these days. And I don’t know if he can pull them back together.

This went pretty much according to the script. The Niners jumped out to a 17 point lead and never looked back. They’re right on pace to snag one of the NFC Wild Card positions and become a dangerous match-up for either the three or four seed.

I can’t tell what’s going on with the Chiefs anymore. They scored 56 points… but allowed 31… to the lowly Raiders. I mean, their quarterback is Matt McGloin. Do I need to say anything more? Kansas City has clinched a playoff berth, but who knows what we’ll see when they get there.

Despite the Jets’ relative success running the ball, Carolina had a healthy lead in time of possession and rebounded well after their loss to New Orleans. Now they’ll have the opportunity to correct that mistake. Speaking of mistakes, Geno Smith only threw one interception in this game. That’s gotta be an improvement, right?

The Cowboys managed to Cowboy away a 23-point lead, by way of terrible play-calling from Bill Callahan, poor management by Jason Garrett, a defense that gave up 300 yards passing to Matt Flynn in the second half, and costly interceptions from Tony Romo. It was epic.

Meanwhile, Flynn probably played his way into another contract with a ludicrous amount of guaranteed money… and he’ll end up getting cut before the season begins. This guy is my hero. Any bets as to who takes a chance on him? I’m betting the Raiders do it… again. The way they run their franchise I’m certain they have an 11-month retention policy for all of their documents. 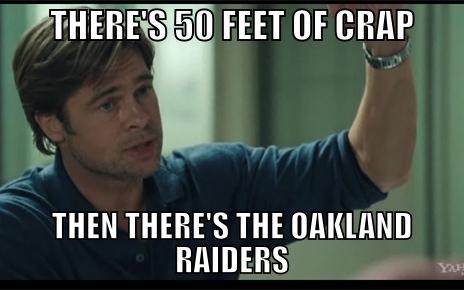 I was incredibly surprised how much fun this game was to watch. Ryan Fitzpatrick came through for me, providing both a last minute comeback to force overtime as well as a game-losing interception. It was like a bonanza of presents. But the Cardinals won in overtime thanks to zero turnovers from their quarterback, Carson Palmer. Larry Fitzgerald’s concussion will be something to keep an eye on as Arizona pushes for a playoff spot.

What the hell Saints? You lost to GOD DAMN KELLEN CLEMENS???

Seriously. That’s just freaking embarrassing. Drew Brees had a god-awful game and now the Saints have put themselves in a position where they have to win Sunday against the Panthers or risk losing the division title. And guess what? They’ll be on the road again. New Orleans is 3-4 on the road this season, so home field advantage is extremely important.

Highlight of the night? This epic blow-up of Bengals punter Kevin Huber. This was totally unnecessary and a prime example of how crazily violent football really is. As soon as he was able to be blocked, he was blind-sided and suffered a broken jaw and vertebrae in his neck. Did Terence Garvin need to knock out a punter? How about just a forceful shove? Because really, that’s all you need to knock down an unaware punter.

And that’s how you do, Detroit. Honestly, could anyone make this kind of shit up? First off, Ravens kicker Justin Tucker was a madman, booting six field goals including the go-ahead 61-yarder with 38 seconds left on the clock. But Matthew Stafford was a hot mess on Monday night, completing only 18 of his 34 passes and tossing three interceptions. He played like crap. Can we all recognize this now? The Ravens are in control of their playoff chances, with a shot to be the division winner by beating Cincy in the season finale. The Lions, meanwhile, are going to need the Bears and Packers to lose in order to reclaim the NFC North.

And that’s all I’ve got for you. It’s time for this fanatic to go to bed and dream of Bear playoff wins.