The Chicago Bears finished their 2013 campaign with a record of 8-8, the definition of average. In years past, fans would be complaining (and rightly so) about the need for a spark on the offense, one that would creatively make use of the weapons and quarterback available to us. No longer is that the case. In 2013, that usually dependable Chicago Bear defense was exposed over the course of 16 games, leaving fans confused and the coaches under fire. But what really happened and where do the Bears go from here? Well, I’ve got some answers for you. They’re hidden in the eighteen thousands words below. Try to find them all!

What Worked (AKA The Offense)

Marc Trestman’s west-coasty system wasn’t even fully installed until later in the season, but everyone saw the offense’s potential for greatness under the new head coach. They averaged the second-most points in the league, behind only the record-shattering Broncos. They ranked fifth in passing offense and a respectable sixteenth in rushing. (But that rushing number is a bit deceptive because of how often Matt Forte was catching passes instead of receiving hand-offs.) When is the last time you remember the Bears having an offense that statistically impressive? I’m so used to seeing squads that are good at “managing the clock” and “avoiding turnovers,” but this was the best Bear offense I’ve ever seen. And it clearly became better as the season went along.

The quarterback position was once again a source of drama for Chicago, as injuries to Jay Cutler (groin, ankle) allowed Josh McCown to enter the starting line-up and earn himself a nice paycheck somewhere for the 2014 season. Jay’s signed to return next season (and the next few after that), so there’s no quarterback controversy this offseason. In fact, there’s barely any necessary changes to make on the offensive side of the ball. (But I will address the Bears’ free agency needs and possible departures soon.) Jay’s footwork and downfield accuracy did improve in 2013 under Trestman, despite the 12 interception total.

Matt Forte had one of his best seasons in the NFL, earning a Pro Bowl bid. Forte finished second in the league in rushing yards (1339) and also caught a whopping 74 passes. Yes, it is Marshall Faulk territory we’re talking about now. Forte’s statistical excellence (along with just common sense) is why I get perturbed when anyone says we should trade the running back. He’s still the engine of this offense.

Brandon Marshall may have had a “down year” by his standards, but he caught 100 passes once again and nabbed 12 touchdowns, which means he’s hand back-to-back double-digit touchdown seasons. So he’s clearly on his way to being the best Bear receiver ever. Alshon Jeffery put on a highlight show in his second year, coming through with a break-out performance that more than satisfied the pre-season hype. Earl Bennett had a decent year as Cutler’s third receiver, but it was Martellus Bennett that stood out at the tight end position. But no matter the spot, the Bears had a viable offensive weapon.

In fact, Jeffery’s season earned him a spot in this ridiculous combo-trailer for Kevin Costner’s 3 Days to Kill.

Quick timeout. This just looks like an excuse for these guys to play around on a set. And It’s nice that Jeffery is considered comparable to Crabtree and Bryant, but when did the NFL get into bed with Kevin Costner? Between this and his playing the Browns’ head coach in Draft Day, he’s all over my football. Anyways back to the Bear offense.

The additions/changes to the offensive line made all the difference for the 2013 Bears. Rookies Kyle Long and Jordan Mills solidified the right side of the line, even earning Long a spot in the Pro Bowl. He along with left guard Matt Slauson opened up running lanes for Matt Forte up the middle. Jermon Bushrod proved worth his contract (for the most part) at left tackle, allowing Cutler the time to heave the ball down the field to his big receivers. Cutler was only sacked 19 times this season, a vast departure from years past.

Yep, everything about the Bears’ offense was better than the year before.

The real inconsistency for the 2013 Chicago Bears came on the defensive side of the ball. After Lovie Smith was relieved of his duties in the offseason, Rod Marinelli was allowed to go elsewhere as well, leaving a respectable veteran defense in limbo. Enter Mel Tucker, a former defensive coordinator and interim head coach from Jacksonville. Tucker was well-respected around the league as a coordinator, but one season in and the defense almost has more problems than I can count.

So what are the reasons this defense was so craptastic? There’s certainly more than one. Here’s why the once-stalwart unit has suddenly turned from dynamic to unwatchable.

Certainly the Bear defense was ravaged by injuries this season. There’s no denying it. The defensive tackle position was decimated, leaving a rotation of players off the street aside from the signed-at-midseason Jay Ratliff, who may not be here next season. Henry Melton and Nate Collins were lost for the year with ACL tears. Melton was playing at an All-Pro level in 2012, so losing him meant this 4-3 defense was missing a star in the middle. End Shea McClellin missed two games with a hamstring issue. But the problem wasn’t just players missing games. Charles Tillman was bothered by knee/groin injuries most of the year, limiting his effectiveness on the field until he was finally put on IR due to a torn triceps. Tillman had his best year as a Pro in 2012, but he may never be 100% the rest of his career (wherever he goes from here). Lance Briggs’ shoulder injury in week eight kept him out seven games, coming back for the final two games of the season. His absence in particular hindered the defense, because he called all the defensive adjustments before the snap. (Sarcasm.) This is why I turn off injuries when I play Madden. You have no idea how good your team actually is if your starters can’t stay on the field. The Bears’ depth simply wasn’t up to the task of replacing so many fallen play-makers.

That overpaid defensive line? Yeah, it didn’t earn their money this season. Even before the injuries, Chicago’s front four couldn’t find the quarterback if you gave them a roadmap and a neon sign saying “Hit This Dude.” 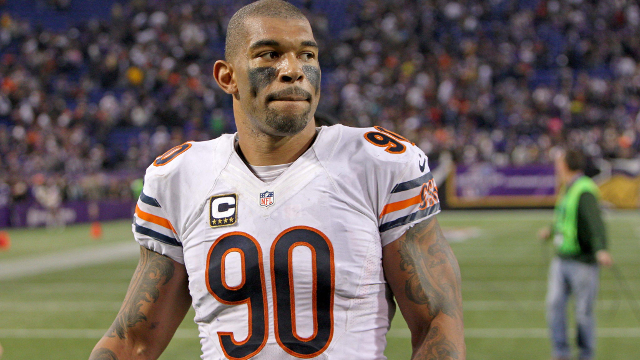 Was that Peppers’s last season?

Shea McClellin had been Chicago’s best pass-rusher (he got there a lot, but didn’t always bring the QB down) even before his three-sack game versus Green Bay, and that’s just not good enough on a team with that much invested in its d-line. Julius Peppers was practically a no-show early in the season, getting taken out of the game with double-teams (though they weren’t always necessary). He came through as the season went on, but only ended up with 7.5 sacks on the season. Yeah, that’s worth $16 million next season. Corey Wootton had 3.5 sacks, which is less than strongside ‘backer James Anderson’s whopping four. The Bears finished the season with 31 sacks, which was tied for dead last in the NFL. That won’t cut it for a scheme that necessitates excellent play up front. If the pass rush isn’t there, the defense is exposed and quarterbacks can easily hit the open spaces. That leads me right into…

The System is Stale

When Tucker came in as the new defensive coordinator, he essentially kept everything the same and just added a few new wrinkles to Chicago’s 4-3/cover two scheme. Most of those were in the form of new blitzes (from the corners) and mixing in more man coverage. But those wrinkles couldn’t change the flat landscape of this stagnant defense. Smart quarterbacks have figured out the cover-two system and accurate ones can avoid the big mistakes the system is designed to take advantage of. You can try to disguise it in fake blitzes or by mugging the line of scrimmage, but the defense isn’t confusing. It gives up too many yards and relies too heavily on turnovers.

Either they’re Old as Hell, Or Hella-Inexperienced

Some of these players are getting old. Despite their past accolades and success, there are more than a few Bears that are facing off with Father Time… and losing. Tillman, Peppers, and even Briggs are all on the downslope of their careers. In the past few seasons, they’ve been able to compensate for their lack of speed/athleticism with veteran savvy and proper technique. Now? The gap is too much to overcome. Tillman’s injuries didn’t help, but I hoped he’d stay at last year’s level for a season or two more. Peppers is clearly trending downward, a bad sign for a player making that kind of money.

The rest of the defense? They’re not smart enough or have seen enough pro football to be able to put themselves in the right position on the field, even when the coaches can’t. Chris Conte, who “improved” last season enough to be the starter going into 2013, has been exposed as a poor tackler and is too often out of position in pass coverage. The examples are endless, but none perhaps more glaring that totally losing Randall Cobb on the Packers’ last touchdown in the finale. Major Wright can be an adequate safety, but his angles can be god-awful. Jonathan Bostic was fooled in pass coverage all too often. Chicago’s younger players haven’t progressed as much as they’ve need to, which means they’re not ready to take the place of the team’s aged veterans.

Ugh. This one still hurts.

How to fix it?

“Thanks Joe, I get it. Chicago has a crappy defense. But what can we do about it?”

Well Mr. Snarky, you’re lucky I’ve got solutions at the ready. If I were running the team, my answer would be simple: it’s time to switch to a 3-4 scheme. It’s the easiest way to get all of the Bears’ best and youngest talent on the field. Bostic and Anderson would be your two interior linebackers, with Briggs and Greene manning the outside slots because they get off a better pass rush. It would be a bold move, but one that is a few years overdue.

What I assumed they’d end up doing is retaining Tucker and plugging the holes in this 4-3 scheme with free agency and the draft. And unfortunately that’s exactly what their plan is for 2014. But that plan is in flux as offseason unfolds, with Marc Trestman revealing they’ll try Shea McClellin at linebacker. That’s a move that needs to happen, but I don’t buy McClellin as a strong side linebacker yet. Chicago has plenty of roster decisions to make this offseason, so we can only wait and see what the personnel dictates come training camp.

But for now can we all agree that Chicago’s most pressing issue is fixing their woeful defense? We can, right? Good. Now onto the 2014 offseason! I should stop writing now.