AKA “Charlie Hunnam Should Never Open his Mouth Again” 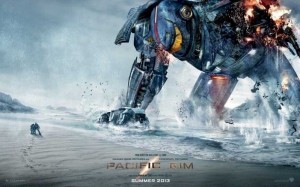 Hollywood doesn’t make enough monster movies. This is a fact. (That I substantiate on my own.) So when word broke that Guillermo Del Toro was directing a large-scale blockbuster with giant robots facing off against giant creatures, there was a shriek of glee from nerdom. And there was a shriek of glee from my seat the first time I saw a Jaeger (robot) throw down with a Kaiju (monster). Without being melodramatic, it was EPIC.

It’s also pretty. So pretty. It’s like watching a live-action Gundam Wing/Godzilla mash-up with the highest quality of special effects. Del Toro’s creature design, while maintaining an extremely similar style to past flicks, stands out and delivers extraordinarily well against the city-scape backdrops. (This movie gives me unimaginable hope for what a modern Godzilla flick could accomplish.) 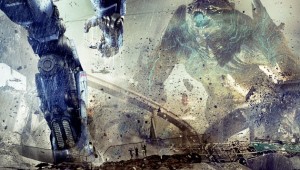 Any action sequence was extraordinarily well crafted and never lacked for interesting twists or turns. Two-on-one’s, energy weapons, swords (whether attached to the Jaeger or held in hand as a boat is), flying Kaiju, and so many other little tweaks make each fight exciting and unique. And effing awesome. Let’s not forget that.

Pacific Rim succeeds so often in its breath-taking fight scenes that its shortcomings are nearly forgivable Unfortunately, the majority of the acting is so piss-poor that it can’t help but detract from your experience. Charlie Hunnam, a cross between Channing Tatum and Liam Hemsworth (both of whom are profoundly better actors, relatively) emotes on the lowest level possible. I’ve seen characters in Mario Kart that exhibit emotion better than he does. Every time he uttered a word during a fight scene I found my rage bar filling up. JUST STOP GIVING HIM LINES! 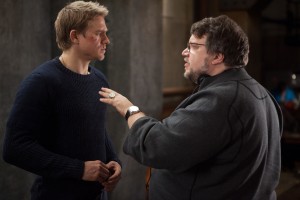 “Okay Charlie. In this scene, I’m going to need you to act LIKE A FUCKING HUMAN BEING.”

Rinko Kikuchi plays his eventual partner/love interest/friends with benefits, bringing all the skill of an awkward anime girl. Seriously, sometimes I thought her eyes were going to balloon up and fake cartoon tears were going to appear. It’s too stereotypical a performance, much like early Godzilla flicks where the ladies were… not taken too seriously. And the cast is rounded out by typical appearances from “the douchebag that doesn’t trust our hero,” and “Russians who like to hit things” and “Asians whose robot designs should be obviously the best but somehow can’t last five minutes.”

The acting isn’t all terrible, mind you. Idris Elba does his thang and does it well. Charlie Day is welcome as the neurotic Dr. Newton Geiszler. Ron Perlman showed up to play off Day and be Ron Perlman. And there was much rejoicing. It’s really too bad Elba had to act in all these scenes opposite dreck.

Still, with all the gripes and numerous poor performances, the buck could be passed upward. The dialogue is mediocre at best. (Can we stop using “We/I/You got this!” six times a movie?) Del Toro was probably too concerned with his precious Kaiju to stop and shoot a scene more than once. (Because there’s no way I let some of these line readings go in my finished cut.) So he has to share blame for some of the sharp drop in quality.

If you’re used to monster movies like I am, you’ll understand and forgive the bad dialogue. (Even though it was way worse than any monster movie I’ve seen. It was THAT F*CKING BAD.) You’ll instead focus on the unbridled violence on-screen as someone plays with their toy collection in front of you. At least half of Pacific Rim is the greatest monster movie you’ve ever seen. And that was good enough for me.