By now you’ve heard: Destiny is selling like crazy and a ton of people are playing it, despite the natural wave of ship-jumpers after a game’s launch. The latest effort from Bungie, (Of Halo fame) Destiny is an amalgamation of gaming genres. Like FPS’s, RPG’s, or MMO’s? Destiny has something for you to love. And since I broke up with the NFL, I’ve had plenty of time on my hands. 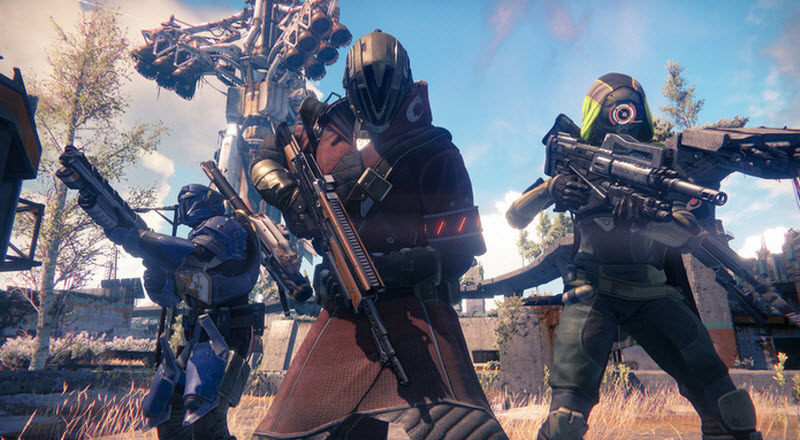 The game certainly has its flaws. It’s not perfect by any stretch. The plot is mostly forgettable from what I’ve played through. (No-name Guardians across the galaxy are shooting various aliens in order to help some ancient globe find its groove again.) The voice-acting has no business being as sub-par as it is for the amount of talents involved. I mean LOOK at this list! (Nathan Fillion can still do no wrong for me.) There isn’t a ton of emotional motivation to continue on in the story, as it relies mostly on your desire to kill things as you anxiously await loot engrams dropping from their pants. And the aspects of different genres from which it draws have been criticized for not going far enough. It’s the “Jack of All Trades, Master of None” critique.

Despite the rampant online complaining about an always-online game that has been out for less than a month and that still has a ton of new content arriving in the coming weeks, I’ve found Destiny to be unbelievably enjoyable. Reviews have come in, ranging from from bad to above average, but no one is touting Destiny as the grand be-all, end-all that some were hyping it to be.

That’s fine. It doesn’t need to be the greatest game of all time. What it does need to be is fun and encouraging of the cooperative gameplay that makes it so special. That’s why the public events in patrol missions, weekends of special competitive events, and daily/weekly story challenges are so integral to the game’s success. It’s an MMO-lite.

There’s grinding. There’s no denying it. And with the recent nerfing of the infamous loot cave, Destiny doesn’t have the same “stand in one place and shoot” exploits of the game’s early build. So you and your friends will actually have to play the game in order to get the gear you so desire. With that in mind, here are some friendly tips for those of you venturing into Destiny’s Online waters for the first time.

Get Through the Story

As I already said, Destiny’s story isn’t exactly an epic masterpiece. And that’s fine. Not everything has to be Mass Effect. (Hey gurl.) So just pound through it! Most of the missions don’t take all that long (20 minutes max unless you’re searching every crevice) and they’ll help level you up along the way and occasionally reward you with decent gear. They’re also the only way to unlock the various planets and locations, so unless you want to be stuck taking bounties you can only complete in Old Russia, you need to open up your world list.

This might seem like an obvious piece of advice for a multi-playerish game that’s always online, but missions are way easier when you’re tag-teaming them. And since fireteams generally go up to three members (an odd number I know), another player in the mix is recommended. Six players can go on the EPIC raid missions, and you’ll probably need that many just to get through it unless you’re a hardcore maniac with three equally as hardcore teammates. So start making friends at the Tower, yo.

I can’t stress this enough. Future War Cult, Dead Orbit, or the New Monarchy: pick one as soon as you get to level 20. When you buy and equip a class-specific item from a faction, all the reputation you’d earn from missions, matches, and whatever else go straight into that one faction’s reputation pool. So instead of spreading rep out among the Crucible and Vanguard factions, it’s all going to one place. That makes for rep-leveling that is twice as fast. I picked Dead Orbit almost instantly and now that I’m at reputation level three, I can go back to earning Vanguard and Crucible rep at my leisure without the pressure of racing to earn access to legendary gear.

So you made a mistake and played way too much of the side quests and missions before completing the main story. Now those story missions are going to be a cakewalk, right? WRONG! You can change the difficulty level on most any mission to make it more challenging and deserving of better rewards. Pushing your Guardian’s limits in PVE will better equip you with the skills necessary to take on actual players in the Crucible.

Hitting level 20 can be terrible if you let it. All of a sudden you’re not using XP to level up, but gear with a Light statistic attached to them. The Light number is just a loose equivalent to experience, really, so don’t get too confused. Also, there’s no need to worry about finding those items immediately. It can take a little while to get gear just by random drops, but lucky for you, the reward system for missions has been overhauled. When you hit level 20, you should just start playing the game. Hop into a Daily Strike Mission with a buddy! Go tear off in the Crucible’s balanced PVP environment! Run around killing things on patrol! Take part in the limited time events for the awesome gear!

I hit what felt like a brutal wall once I finally made it to 20, unsure of how best to go about acquiring new gear that wasn’t dropping nearly enough for me. But then I just kept playing in the Crucible and eventually I was rewarded with fun new stuff! Or at least the means to buy fun new stuff, which should be your primary way of getting gear. Don’t rely on random-ness, just earn the Crucible/Vanguard marks necessary to buy that pair of Legendary booties. If you are awarded stuff along the way, great. But my main complaint about the loot-farming is that engrams are supposed to be randomized. You can’t count on them being what you need. I was in a minority as generally okay with how the loot system functioned previously, but now it’s a bit cleaner and easier to understand. I much prefer the “grind” of playing PVP or PVE  (both of which are equally fun) and buying specifically what I want as opposed to needing engrams to pay unlikely dividends for me.

This is the most important thing I can share with you. Until you reach level 20, you won’t have access to the glorious shaders that auto-coordinates your outfit. Until then, you’ll be forced to use whatever armor you can find in their *shudder* default color. That being the case, don’t run around trying to pull off that green helmet/grey boots/yellow gloves/tan chest-piece combo. It’s jarring and arresting to my fashion senses. Just keep wearing that yellow gear until you can pull together another full outfit. Please.

Destiny is one of those games that I think shines in PVP (Player versus Player) or PVE (Player versus Environment). It can be a never-ending multiplayer Deathmatch or the solitude of Skyrim, thanks to the game’s deliberate absence of audio communication with non-fireteam members. You might already know which type of game suits you best, but give everything in Destiny a chance to impress you. I was more than contented with the Crucible’s balance multiplayer gaming, despite my preference to grind away solo.

That’s all I’ve got for you! If you’re on the fence about Destiny, stop riding it and come join the killings. Now if you’ll excuse me, I’ve got some shootins’ to do.