This NFC North showdown was one minute and forty-three seconds away from ending in a tie. Thankfully, an actual resolution was reached in overtime, but it wasn’t in the favor of the Chicago Bears. Let’s review this game and see what had to happen for the Bears to fall to 6-6.

Alshon Jeffery y’all. He’s the best number two receiver I’ve ever seen for Chicago. He set a new Bears receiving record with 249 yards, beating the record he set earlier in the season. Josh McCown was dropping bombs on the Viking defense, two of which found Jeffery for 80 and 46 yard scores. The second touchdown grab, which was a highlight catch, also resulted in a Chris Cook ejection, so basically it was the greatest play I’ve ever seen.

And it seems like I’m saying this every week, but Matt Forte is having a fantastic year. He added 120 yards rushing and 31 yards receiving to his season totals on Sunday. Trestman’s focus on Forte during this Cutler-less stretch has kept the Chicago offense balanced and defenses honest.

Surprisingly, Julius Peppers and the pass rush showed up to play today. The defensive end notched 2.5 sacks, half of the defense’s total for the entire game.

Obviously the run defense left something to be desired. Adrian Peterson routinely gashed Chicago’s front seven, leading to his 211 yards on 35 carries. But he didn’t score a rushing touchdown! No, that honor went to Cordarrelle Patterson, who had a 33-yard run right up the middle for a touchdown in second quarter.

Mel Tucker’s defense gave up 13 points in the fourth quarter and overtime, where missed tackles, penalties, and poor gap coverage were their undoing.

With the tumultuous nature of this game and the constant swings in momentum, the win was surely out of reach when Robbie Gould missed his 45-yard attempt in overtime. The feeling then was clear: either this game would end in a loss, or the dreaded tie. But with Peterson running the ball as he was, Chicago wasn’t going to see another possession. 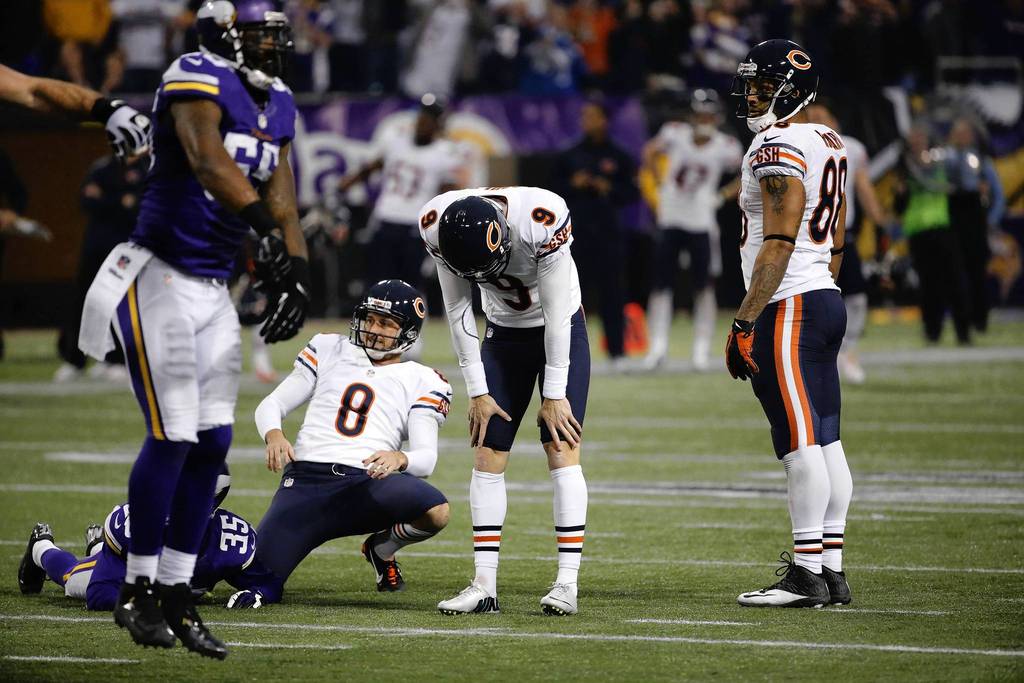 -Let’s go through this ridiculous series of events in the fourth quarter as the Bears were trying to hold onto a three point lead. On 2nd and 11, McCown stepped up in the pocket then push-passed it right to a defender, which bounced off his hands into the mitts of Kyle Long… who ran forward and fumbled when he got tackled. The recovery went to Minnesota.

A couple plays later, rookie linebacker Jonathan Bostic laid the wood while tackling Viking tight end Chase Ford on third down deep in Chicago territory. Bostic then stood over the fallen player and taunted him. That’s a 15 yard penalty and an automatic first down. That looked like it would lead to a Minnesota touchdown…

… When Bostic was saved by a pass to fullback Rhett Ellison, which deflected off his hands to Craig Steltz, who tipped it again and kept it alive for Khaseem Greene, who ran it back 49 yards.

Yeah, it was INSANE.

– I was so-so on the horse collar penalty on Chris Conte on Minnesota’s first field goal drive in overtime. I always understood the rule to mean that if the defender got his hand in the collar and then pulled him down by that grasp, it was a penalty. Conte clearly switched his emphasis to the lower extremities and got Peterson down by the legs. But I get it. I guess.

-Did I mention how we couldn’t stop Adrian Peterson? Only time he didn’t break two tackles on a play was when he was on the sidelines.

It means they’re on a collision course with 8-8, or maybe 9-7 if they’re lucky. At 6-6, they’re in a tough position to leapfrog the 7-5 Lions, who managed to win on Thanksgiving. Minnesota wasn’t good enough to expose all Chicago’s defensive deficiencies, but they didn’t have to. They kept feeding Adrian Peterson and rode him to victory. The Bears knew it was coming and they were unable to prevent it, even with Jeremiah Ratliff and Stephen Paea. And before anyone starts complaining about the Bears’ penalties, the Vikings got plenty of calls too. The facemask on Ellison that negated their game-winning field goal was deflating as any penalty could be, but they eventually made up for it. The Bears had plenty of chances to earn this win. Now they’re in a hole and have to claw their way out of it. Winning their last four games is probably the only way for Chicago to make it into the playoffs.

Yep. Think about it.