The season was on the line as the Bears and Packers played a game right down to the wire on Sunday, but Chicago’s defense was once again its undoing. Giving away a lead with under a minute left in the contest, the Bears saw their playoff hopes dissipate as the Packers celebrated. Let’s get into the final Gameday Review of the 2013 Bears season.

The Bear defense had their successes early, with two interceptions in the first quarter. One came from a rusty Rodgers throw, the other from a tipped pass off Jordy Nelson’s hands. Chicago’s defense actually made a few stands in the first half, forcing two field goals and coming away with those turnovers while Green Bay was threatening on two other drives. It was as not terrible as I’ve seen Mel Tucker’s unit this season.

The first of Chicago’s second half drives was a thing of beauty, with a lengthy punt return by Devin Hester to the Packers’ 30 yard line. Five Matt Forte runs later, the Bears were up 14-13. When the Bears needed him most Forte delivered, as he has most of this season. Forte’s 157 combined yards prove that is a versatile weapon that demands respect. He made so many great cuts to the outside that the Packers could not defend. This is second time he’s scored three touchdowns in a game this season, giving him nine on the year. That’s a career high, yo.

Jay Cutler probably has his best game of the season as well, with smart decisions and excellent reads of a poor Packer defense. A 67-yard bomb to Alshon Jeffery put the Bears in position for a one yard by Forte, which gave Chicago a one point lead in the third quarter. His throw to the corner of the endzone was adjusted to brilliantly by Brandon Marshall, putting the Bears up by eight. That lead didn’t feel safe for long though… 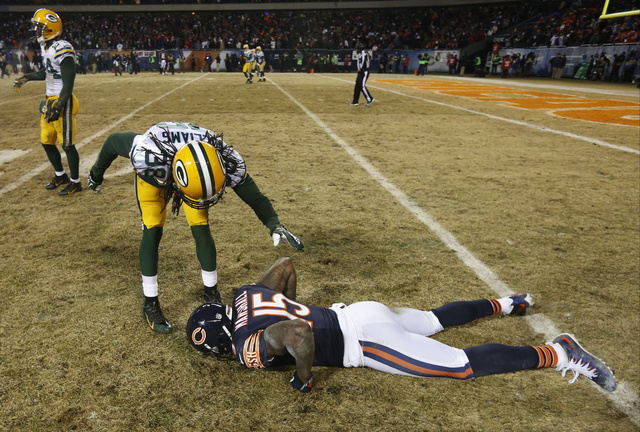 After the first half, Chicago’s defense just fell apart. Three touchdowns were given up in the final two quarters, erasing any lead the offense was potent enough to capture. The run defense was atrocious yet again, the theme of the 2013 season. Rodgers’ rust was gone by the time the second half started, so he began picking apart an out-of-position secondary while Eddie Lacy wrecked the front seven. Giving up 473 yards of offense, the Bears’ defense should be entirely responsible for their team’s failing to make the playoffs.

How about on 4th and 8 with less than a minute on the clock, when the Bears just let Randall Cobb burn them for a 48 yard score? Yeah, that’s when the losing kicked in.

-Wait. I’m still confused about how that late penalty called on Shea McClellin was actually a late hit. I get protecting the quarterback, but really?

-The second quarter saw a freaking ridiculous play where Julius Peppers stripped Rodgers, who fumbled it forward, the ball falling in the middle of the play. The play seemed dead, but no whistle had been blown. Every player was standing around, aside for Jarrett Boykin, who (along with Rodgers) saw the Packer sideline urging them to run the ball into the endzone. They did. It was reviewed and upheld. Touchdown. For any Bears homer that thinks that wasn’t a fumble, it was. It truly was. The ball was jarred loose before Rodgers’ hand came forward, which is a fumble. I blame all the players who didn’t play until the whistle. When on EVERY OTHER PLAY EVER these footballers pick up the ball and run for 15 yards when we all know the play is dead, what made this one different?

-How many more games do I have to see where players are just slipping and sliding around on this Soldier Field sod? Can we just replace the damn thing already?

-Chris Conte has had his issues this season. Tonight was more of the same. He let a possible fourth quarter interception fly right through his arms and then failed to catch Lacy from behind on the following score by the Packers.

-While the numbers say their nights were decent, the big wide-outs for Chicago didn’t bring their A-games. Too many drops. And only one catch from Martellus Bennett is NOT enough.

So an 8-8 season is not too far off from where I thought this team would end up. Out of the playoffs, the Bears have a ton of decisions to make on both sides of the football. I’ll get into the sweeping changes that should be made later as the offseason approaches, but today this is all about the immediate impact. The defense is clearly a mess under Mel Tucker. The offense wasn’t the issue today, and it hasn’t been all season long. The offense averages nearly 28 points a game, good for third in the NFL. Could they have scored more in the first half? Surely. But I’d expect the defense to occasionally make a play in the second half. Instead the Packers have inserted themselves into the postseason as the four seed. Now they have a chance to add to their trophy collection. For Marc Trestman, it’s back to the drawing board after his rookie coaching season.

Oh. Well. There’s always next year. But next year this team could look very different. I’ll be back later to talk about that. For now…