While I certainly wasn’t appreciative of the late-game drama, I was thankful that the Chicago Bears put down the New York Giants Thursday night. Chicago capitalized on early turnovers to jump out to a lead that they would never relinquish. Let’s break this game down in this Gameday Review!

I was seconds away from tweeting about how Charles Tillman’s absence would dramatically alter the defense’s performance when Zack Bowman picked off a third down Eli Manning pass. At the Giant goal line and faced with a fourth down, Marc Trestman decided to go for the touchdown and not settle for the field goal early in the game. I was fine with this decision, to be honest. It was early, so if things went wrong, the Bears were going to have time to overcome it. (Like they did.) Jay Cutler’s throw was a little behind Brandon Marshall, who couldn’t bring it in, The offense left the field without putting up points off of the turnover. So Eli Manning got another chance to throw an interception, which he did, right into the hands of Tim Jennings, who boomeranged Manning for seven points. 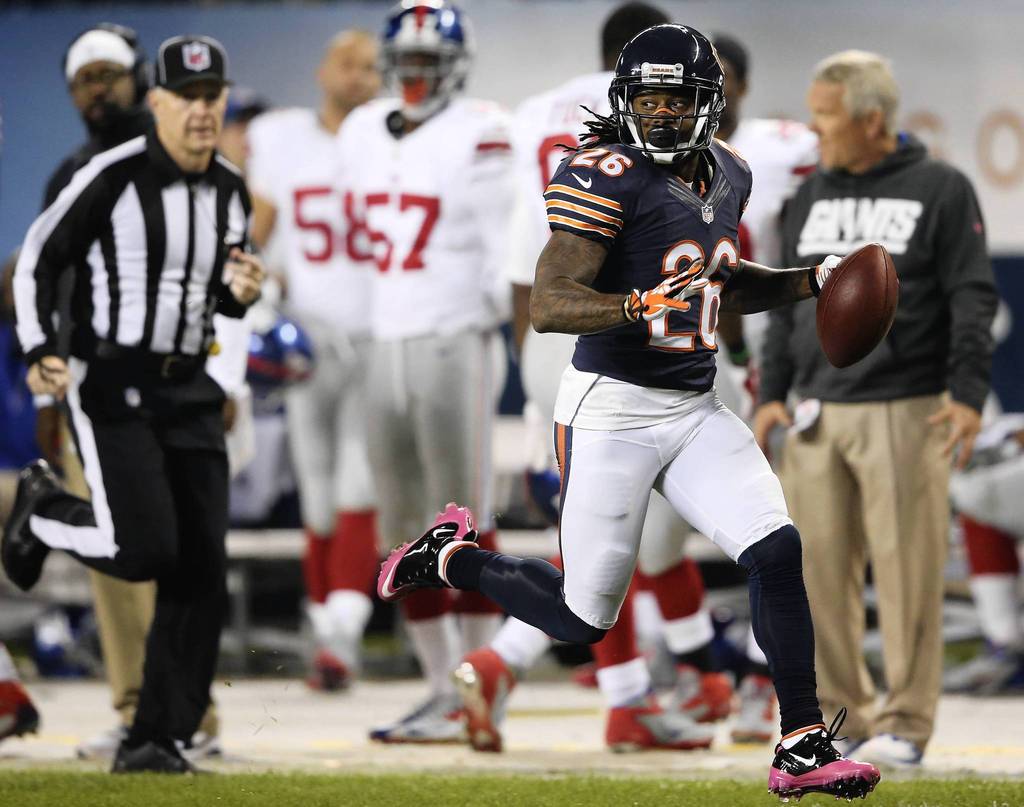 The Giants were not to be immediately unraveled, however, forming their own long drive that ended in a Brandon Jacobs leg-churning run across the goal line. Chicago’s speedy defense has historically had trouble against bigger running backs, and this signaled the continuation of that trend.

Chicago’s first scoring drive (on offense) featured three passes to Brandon Marshall and one 30 yard gainer to fullback Tony Fiametta, who the Giants decided to not cover/tackle on that play. Who knew that the fullback outlet was going to be our biggest weapon? Cutler was five of six on the drive, which ended with the first touchdown pass to Marshall.

A 37-yard pass from Manning to forgotten receiver Reuben Randle saw another fight for the endzone, which was won by the Giants yet again. The defense didn’t show much tackling ability for the second straight game. Thankfully the offense responded to the Giants score with one of their own. A 27 yard pass to Jeffery got the Bears into Giant territory, where passes to Martellus Bennett and Brandon Marshall drew them closer to the goal line. Another short pass to Marshall put the gap at 21-14.

There was some god-awful and awkward clock management at the end of the first half, with precious seconds being lost inbetween passes over the middle. The plays were slow to be called at the line and it never seemed like the offense cared about anything else other than making sure they got their field goal. And Robbie Gould delivered, with a 24-14 lead going into the break. Trestman’s offense was clicking in this first half, not falling prey to the slow starts of recent weeks.

The second half was low on points, but high on drama. Gould came in and booted a 51-yarder to make it 27-14, giving the Bears some breathing room. Mel Tucker’s defense finally registered a sack of Eli Manning. Corey Wootton, playing mostly in the middle of the line, met Lance Briggs at the quarterback. On the ensuing punt though, Devin Hester nearly fumbled away the catch. (Maybe he needs to get yelled at.) Thankfully, the Bears avoided any turnovers Thursday night, thanks to excellent play from Jay Cutler. Cutler showed great touch on a pass to the flat as the offense went for it on third and two early in the fourth quarter.

After an earlier drive that ended in a second Jacobs score, the Giants were down six and closing in fast. Eli Manning was in the process of leading his team down the field for a potential lead-changing score when a near interception by Tim Jennings raised Bear fans’ collective fists. But Jennings made up for it a few plays later when a pass tipped off tight end Brandon Meyers’ hands and into the corner’s mitts. Manning had thrown his third interception of the game, and it was a costly one. 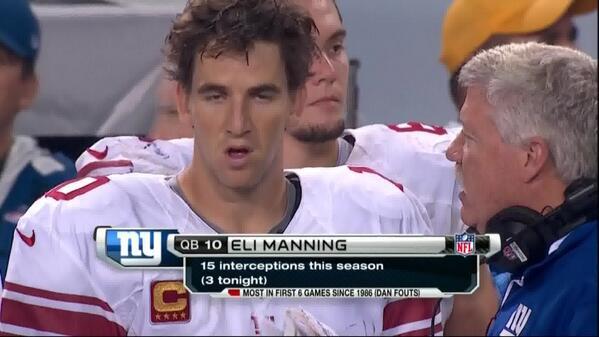 Let us all rejoice in Manning Face.

The G-Men’s implosion continued on the Bears’ subsequent time-killing drive, as a defensive holding call gave up an automatic first down to Cutler and the offense. A few runs were all that was needed to seal up this win.

-Middle linebacker D.J. Williams left the game with what is feared to be a torn pectoral muscle. Expect more information to come out in the next few days, but he’s likely done for the season. Jonathan Bostic will become the starting middle linebacker this season after all.

-Devin Hester was yelling at Robbie Gould after Gould had a poor kickoff. The two came out o Friday and debunked any riff, but I for one would like to punch Hester in the head. If there was a tally being kept of special teams fuck-ups, Hester would be tops on the list. He’s got no business whatsoever yelling at the kicker.

-Randle didn’t “give himself up.” He slipped. Plain and simple. But it was nice to get Dean from the league office in the booth and explain it during the broadcast. When Randle didn’t make any move to get up and acted as if he was down, the play was ruled dead. That’s called a referee bail-out, everyone.

It means the defense certainly isn’t up to snuff with all these injuries. They Bears struggled to produce a pass rush before, but now they’re going to have problems stopping the run as well. Giving up over 100 yards to Brandon Jacobs, WHO WASN’T EVEN IN THE NFL THREE WEEKS AGO, is unacceptable. The lack of depth at defensive tackle is alarming, so GM Phil Emery may need to make a trade or get creative in signings to stop the bleeding. Without Charles Tillman, the Bears lose some tackling on the outside and a good edge container. In the interim, Chicago’s offense will have to pick up the slack.