And we’re back for another week of Jay Cutler-less football! This was only less newsworthy due to the Derrick Rose injury, which has stolen all the headlines the past 36 hours. But Sunday? The brothers Long meet on the field in a rare case of brothers actually playing against each other, unlike those Mannings. Kyle Long will man the offensive line for the Bears while his brother Chris Long will be at defensive end for the Rams. With that pairing in mind, let’s get this Gameday Preview started!

What you need to know about the Rams franchise:

They used to be the L.A. Rams as recently as the early 80’s. I’m pretty sure the Edward Jones Dome is a renovated aircraft hangar. Jeff Fisher is their coach, which means they’re destined for twelve seasons of aggressively tackling mediocrity.

If he was healthy, this spot would be reserved to discuss Sam Bradford, the overpaid quarterback who hasn’t lived up to the hype of being a number one overall pick. But… he’s not healthy. He tore his ACL earlier this season, which gave way to back-up Kellen Clemens. Clemens was a second round pick of the Jets back in 2006 and has bounced around the league. He’s an average at-best quarterback that doesn’t complete a ton of passes and is good for a dumb interception more often than you’d like. 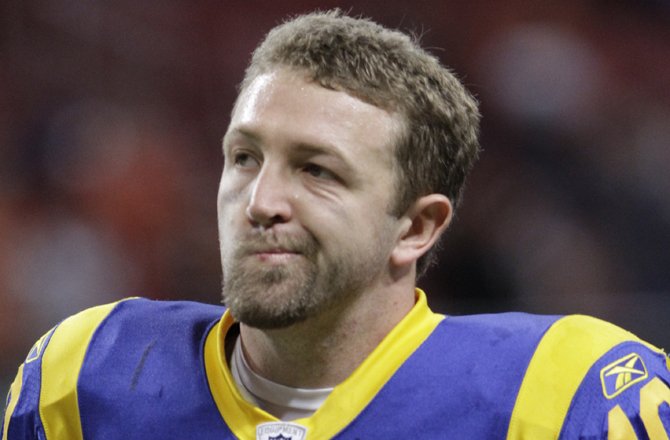 This is an NFL quarterback?

Rookie Zac Stacy has been a bright spot for the Ram offense as this season unfolded, averaging over four yards a carry. The Rams have been feeding him the ball as well, with at least 26 carries in each of his last three games. He’ll be a workhorse for that offense on Sunday. Tavon Austin is worth keeping an eye on if only for his return and deep play ability. Oh, and the Rams have tight end Jared Cook as well. He’ll give the Bear linebackers fits. Huh. Seems like the Rams have actual playmakers. Too bad they require Kellen Clemens getting them the ball.

Oh, it’s easily Chris Long and Robert Quinn. St. Louis’ two dominant defensive ends can wreck havoc on the outside if Trestman doesn’t scheme some help their way or have Josh McCown get the ball out quickly. Jermon Bushrod and Jordan Mills are going to have their hands full, but on passing plays expect a running back or a tight end to chip block one of these ends at the very least.

The Rams are a 1.5 point home favorite.

Controlling Stacy is clearly the Bears’ best bet in getting a win on Sunday. If the Rams can run the ball, then Clemens has an easier day because he can pull off play-action passes with more efficiency. And if Kellen Freaking Clemens is suckering in your defense with play-action, it’s game over. Chicago needs to put up 20 points or so in order to win. Can their offense do it? Maybe.

I’m foreseeing a letdown for the Bears on the road, due mostly to the play of the Rams‘ defensive line. I think McCown will be under pressure early and often.

At least three. I assume Tavon Austin will make one huge play, Stacy will rip off a long run, and I’m reserving one for a hit on McCown. If he gets the snot kicked out of him, that number could balloon. If I don’t put myself into a food coma before that happens. I DON’T WANT TO FEEL.

And I’m out! Enjoy this game everybody. I’ll be stuffing my face with Oreos. Bear Down and Happy Jay Cutler Day!