At 5-4 the Chicago Bears are on the outside of the NFC playoff picture. They’ll need to string wins together if they want back in. It starts on Sunday against the Baltimore Ravens. Without Jay Cutler, the Bears will once again turn to back-up Josh McCown. Time for another Gameday Preview!

What you need to know about the Raven franchise:

They’re the reigning Super Bowl Champs. They have a “franchise” quarterback, no running game, and a defense that underwent an overhaul in the offseason.

And they no loner have a deer antler spray-applying murderer on their team. I’d use a picture of Ray Lewis here, but I don’t want to give him screen time on MY website.

Joe Flacco. King of Wagering on Himself. Dude went into last season without a contract extension and won himself a Super Bowl. Now? He makes $20 million dollars a year to be inaccurate and throw deep go-routes to Torrey Smith. Ass. 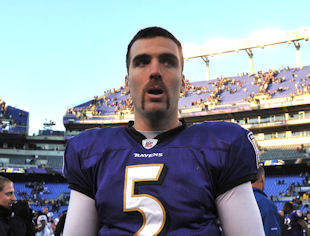 Ray Rice. He’s been dealing with a hip injury this season (or so we’ve heard). This has dropped his production off a cliff. He’s nowhere near the player he was in 2012. He’s averaging on 2.5 yards a carry, which is a paltry number. If he gets going against the Bears weak interior, look out. (He probably won’t though.)

Terrell Suggs. The official replacement at loudmouth linebacker for Lewis. He gets after the quarterback as well as any 3-4 ‘backer, so Jermon Bushrod will have his hands full at left tackle.

With McCown under center, the route for victory is simple. Short passes that offset the Raven pass rush accompanied by a large dose of Matt Forte. Don’t get cute against the Baltimore defense. And don’t take chances versus the Raven offense. if you lose receiver Torrey Smith only once, he’ll burn you down the field.

Yeah I don’t know. I really don’t. I’m not sure which comibation of offenses and defenses will show up. Let’s just go Bears, to keep the angry pre-game fans happy.

Please. I plan on being on being in a food coma or other similar state when this game is on. I’m not gonna be all emotionally erratic for this team.

Are you excited yet????? I know that was a boisterous endorsement of your team. But hey, I’m just being realistic.