Chicago didn’t only lose a game on Sunday, it lost two of its most important starters, one on each side of the ball. Let’s get to the ugly injury report and break down what this means for this 4-3 team.

The injury to Briggs came as a bit of a surprise, given that he was listed as “probable” to return in Sunday’s game. But his loss means an already depressing defense will be even more out of sorts. Briggs was one of the few Bear defenders making impact plays that didn’t involve turnovers. He was actually tackling suckas at times. 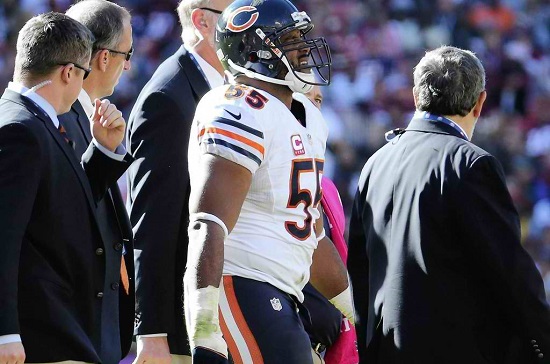 I’m pretty much convinced this is football karma for Briggs jumping off-sides during that New Orleans game. Is that mean of me to say? He needs to sit in the corner and think about what he did. Chicago’s defense, in the meantime, will be dealing with the loss of one of its leaders and the signal-caller for their pre-play adjustments. I haven’t seen who the Bears will tab as the fill-in for the role, but it won’t be rookie Khaseem Greene, who figures to replace Lance in the starting line-up. The job of getting everyone in the right position on defense might fall to veteran linebacker James Anderson, which means he’ll need to stay on the field for more plays. Jonathan Bostic is a possibility, but he’s had enough issues getting himself into the right position, much less everyone else. Right now, I’d assume it’s Anderson. There are reasons other positions don’t call the defensive plays, mostly logistical in nature. (Where they’re positioned, being able to hear them, etc.) But losing Lance may not even be the most significant absence for the Bears.

First off, this sounds like a terrible, terrible injury. Even reading it induces a twinge of fear in me. But now we know Cutler will be out at least a quarter of the season, if not more. This isn’t an injury that you rush back from. Jordan Palmer (from the preseason, if you watched any) was signed earlier today to be the back-up to Josh McCown during this stretch. 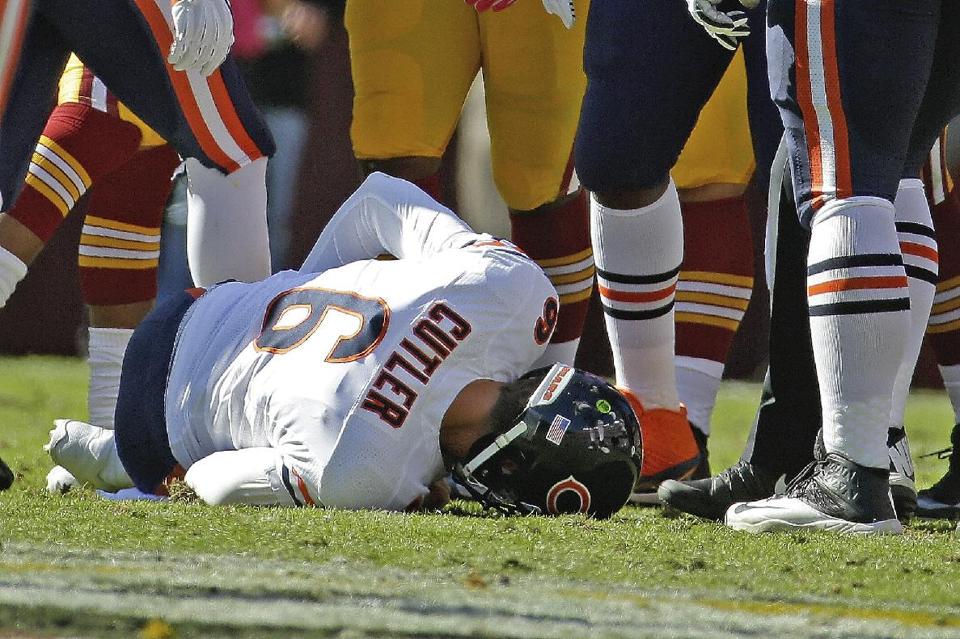 Josh played quite well in replacement duty on Sunday, but he doesn’t have the talent of Cutler. (Or even the game experience, despite his time in the league.) The offense will look different with McCown under center full-time, so expect more crossing patterns and short routes designed to let his receivers run after the catch. If he falls on his face, he’ll just be another in the long line of Chicago back-up QB’s that couldn’t pass muster. If he succeeds though, I’m not going to let one Chicago “fan” off the hook if they spout off “McCown should be the starter.” I will literally punch them in the face. (Seriously, you guys better shut the hell up.) Funnily enough, when McCown was asked what he couldn’t do that Jay could, his response was: “Have you seen him throw?” At least I know where one punch won’t be aimed. Thanks Josh.

As of right now, four weeks is the approximate minimum recovery time for each player. So that schedule looks like this:

Chicago can only hope to go 2-1 during that stretch, but the stronger possibilities are 1-2 or even 0-3. If that’s the case, these injuries will drop Chicago below .500 and put them in a hole as they wait for their captains to return.

Stay strong Bear fans! (Or at least drink heavily on the bye week.) Bear Down and Happy Jay Cutler Day!