Despite entering 2014’s free agency period with little cap space to spare, GM Phil Emery has made several moves to alter his squad within the first week of free agency. But will they be noticeable improvements? Let’s go through the list of transactions. (Not every contract’s details were available, but most of the money totals are here.)

This is the big-name signing that casual NFL fans may not know is a big name. Houston has been one of the best defenders on a surprisingly decent Oakland defense in recent years. He’s a great run-stuffer off the edge and has the ability to switch inside on a 4-3 defensive line and rush from a defensive tackle position. He’s a great pick-up on an affordable contract and instantly upgrades the defensive end position. It also allowed Emery to make a move that we all knew was coming. (More below.) Further details on this deal have come out, revealing that it’s more of a 2 year, $15M contract, as it has an out after year two. More genius from Emery. 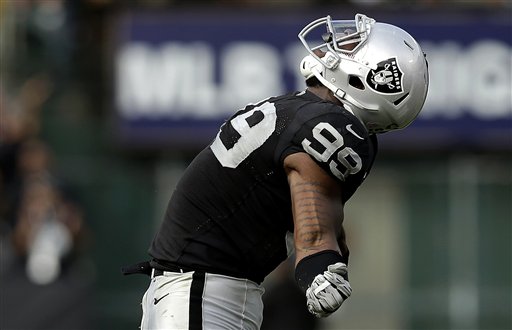 The former Giant and Panther is a credible receiver that can easily match Earl Bennett’s shoddy production of the past few seasons, even if he didn’t show it in Carolina. Aside from that, Hixon’s signing does more than just add a body to the depth chart. Hixon also has lengthy experience as a punt/kick returner. This led to the Bears reportedly asking returner Eric Weems to take a pay cut. This won’t be the first time Emery has used an incoming player as leverage against an existing bloated contract, as we’ll see below.

While I haven’t seen the particulars regarding the guaranteed money on Mundy’s contract, I’m certain he’s not breaking the bank. He’s a decent safety with plenty of NFL experience under his belt. He rode the bench as a Steeler for four years, but last season he made ten starts for a struggling Giant defense. He’ll be coming in to compete for a starting job with the crop of new safeties Chicago will have on its roster. Like the following…

Jennings come to Chicago by way of Green Bay, where he was an average-level safety for the Pack, filling in whenver injuries called him into the line-up. He’ll join Mundy as depth-filing safeties, but he doesn’t preclude the Bears from using a high draft pick on a surefire starter.

Young is a great pick-up off the Lions’ roster, a defensive end that can also shut down the run. He tallied 47 tackles in 2013 to go along with his 3.5 sacks. A cheap signing, Young gives the Bears another starting-quality defensive end opposite Houston.

The former special teams captain of the Panthers, Senn is simply the replacement for the departing Blake Costanzo. Don’t be overly concerned if you don’t know who he is. He’s a depth-filling linebacker whose sole role should be as coverage guy on kick and punt returns, unless some debilitating injuries occur.

McCray got a decent amount of starting experience in 2013 as a member of the Dallas Cowboys’ secondary. His ten starts earned him a shot with the Bears, but he’ll probably fill in the depth chart after a competition in training camp.

I could almost put this below under “Re-Signings,” as Idonije was only gone from the Bears for a year after signing with Detroit last offseason. While no longer the above-average lineman he once was, Idonije brings a much-needed body to this d-line rotation. And maybe he’s bringing back Detroit’s line calls? (Too soon?)

This was one of those moves I thought was going to take longer to resolve itself. Instead, it seems as if Tillman didn’t get a ton of interest around the league, including from Lovie Smith down in Tampa Bay (which I assume was just a favor from Smith in order to play it against the Bears for a better contract). Emery gets Tillman on a low-risk one year deal, ensuring he doesn’t overpay for past production. Chicago’s corner depth chart doesn’t look as frightening now.

Bringing Rosario back in the fold on another one year deal gives the Bears enough tight ends to fill out the roster. What it really does is give them options when the draft rolls around. They don’t NEED to draft a tight end with Martellus Bennett, Rosario, and Fendi Onobun all under contract.

Williams’ one season with the Bears was derailed early and late by injuries. Still, Emery saw enough in his play to bring the linebacker back on another one year contract. Williams will probably be the starter at middle linebacker by default unless one of Chicago’s younger players at the position steps up during training camp.

Bringing back Steltz gives Chicago another body in the secondary, one that can also play on special teams. I’ve noted that while I think Steltz has plenty of football smarts, he doesn’t have the raw talent necessary to hold down a starting role in this defense.

This writing has been on the wall for some time. Peppers had a crazy high cap number and wasn’t performing anywhere near the level that kind of money would require of him, meaning it was time for him to go. Releasing Peppers freed up almost $10M in cap space, which Emery can (and has) put to good use. Julius went along and signed a deal with the rival Packers, but I’m not extremely worried about a strong bounce-back year. (But I kinda am.)

He sucked and made too much mo-

Bennett was underperforming the contract Jerry Angelo signed him to three years ago. And when you have Brandon Marshall and Alshon Jeffery in front of you, you have to make the most of your chances. Bennett didn’t take the pay cut the Bears were asking him to and now he’s on the free agent market. This frees up about $2.45M in cap space and means Marquess Wilson will likely step into the third receiver role for 2014. And this is really the best case scenario for Bennett, who can go to the Panthers, Jaguars, or Jets and immediately step into a starting role and upgrade those embarrassing wide-out depth charts.

And there you go! All the notable moves from Phil Emery during the first week of free agent action. A few comments on what we’ve seen here:

-I was just writing about how Henry Melton was still available, but that is no longer the case. Dude just tweeted he’s joining the Dallas Cowboys. Balls.

-It’s obvious Emery is a player of the analytics game. Instead of locking up several “name” players with long term deals, he’s instead bringing in a plethora of guys on cheap, one-year contracts that can provide relatively similar production. Personally, I love what he’s doing. There are places you need to spend money on a football roster, but only spend good money when it’s absolutely necessary.

I don’t expect a lot more news out of this team before the draft hits on May eighth as they only have a bit over $5M in cap space, but if there’s anything to cover you can rest assured I’ll be back here, doling out my barely edible morsels of insight.