Another day of Thanksgiving football is upon us! That time of year when the holidays start in earnest and I completely withdraw into the catacombs of the NFL, not to be heard until the playoffs are completed. Thursday will consist of me sitting on various couches and chairs, eating whatever I can manage to find, as I try to engage in as few social interactions as possible. Let’s run through the games that will be attracting my attention!

The first of our annual Turkey day festivities brings us an NFC North match-up that could go a long way in deciding the division’s playoff representative. Instead of Aaron Rodgers (who has already been ruled out) the starting quarterback for the Packers will be Matt Flynn, who came on in relief of the ineffective Scott Tolzien last week. With Flynn in the line-up and a week of practice with the first team starters, I feel the Packers have a legitimate shot to knock off the Lions, who are notoriously bad in Thanksgiving Day games. The Lions need to stave off their collapse against their main rival for the North title.

And I can’t wait to see what horrid, misshapen form FOX’s “Galloping Gobbler” takes this year. It used to be actually in the guise of a turkey, but they seemed to have wised up and just turned it into a plaque. Lame. 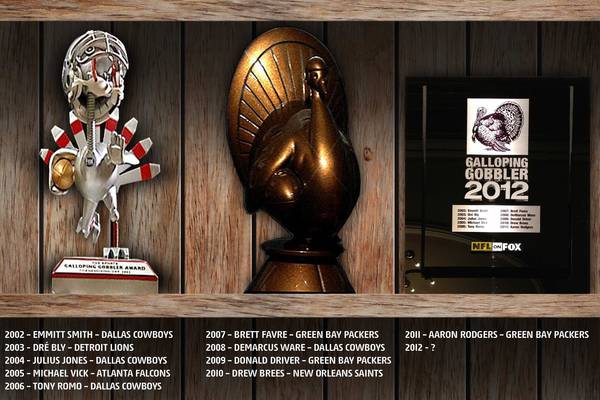 The Raiders are faintly clinging to hopes of a postseason appearance, heading to Dallas to take on the Cowboys, co-leaders of the NFC East. Oakland has the 25th ranked pass defense in the league which doesn’t spell well for them against Tony Romo and Dez Bryant, who will be dying to get the ball and score on this national stage. Matt McGloin will not keep pace with Tony Romo. You can take that to the football bank. I honestly don’t see this being a close game, so feel free to phase in and out of your tryptophan-induced coma. (If that’s even legit.)

Instead of the Gobbler, CBS has created a Phil Simms “All Iron” Award or some crap like that. It’s some metal ironically shaped like an iron. Not impressive or fun in the slightest. You lose CBS.

Oh the AFC North. You are such a trifling mistress. A year or two ago, this would have been a fitting and exciting end to Thanksgiving, with promises of violent collisions, aggressive defenses, and competitive action sure to be fulfilled. In 2013? This game features erratic quarterbacks, non-existent running games and above average defenses. Joe Flacco has proved nothing since signing his mega-deal in the offseason. (I’ve been saying he’s a garbage regular season quarterback this whole time.) Now he and Big Ben are fighting to keep their mediocre squads in the hunt for the sixth seed in the AFC playoffs, as the division will clearly be under Cincy’s control. It you like field goals and punts, this will be the game for you. (Unless Ben goes crazy.)

Last year’s Turkey day action gave us the gift that keeps on giving, The Buttfumble.

One can only hope that 2013 can bring us something half as entertaining.

And that’s all I have for you. I have dogs with which to cuddle and tweets to send. Enjoy the holiday, and don’t contribute to the insanity by going shopping on Thursday. Some employees deserve time off.