And here we have it. The most legitimate preseason game in the NFL. The third exhibition game is about as close as NFL teams get to going all the way, as opposed to the OTPHJ’s that are their first and second outings. (Don’t even get me started on the fourth game. That’s just straight up rejection.) Anyways, am I off track already? Thought so. Here’s what to watch out for in the Bears’ game versus the Raiders.

The Smallest of Glimpses

Up until now we’ve gotten brief, momentary looks at the first string offense. The first game was utterly vanilla, while the second just featured anticipated throws from Jay Cutler to Brandon Marshall. Obviously neither of those performances are indications of Trestman’s actual offensive scheme. This week I’d expect to spot a few quick flashes of this system and how Trestman will really play-call a game. It won’t be a crystal clear image, but maybe we can stare really hard and find one of those 3D images within its blurriness. I’m betting it’ll look like a pirate ship. 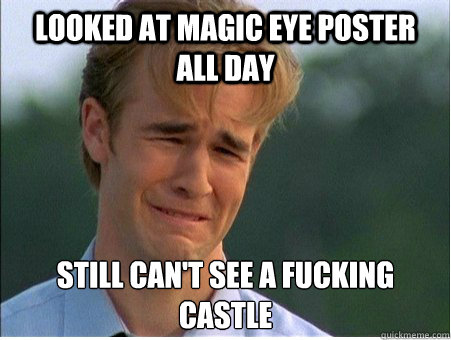 Or a castle. Either one would be cool.

Don’t Get a Super Bowl Tattoo Yet

It’s going to be important that you temper your expectations after this game, because Oakland is TERRIBLE. I mean, absolutely god-awful. Their offensive line is likely the worst in the league after they lost their starting left tackle (who was up-and-coming for sure). Chicago’s defensive line may tear through them like tissue paper, especially if Julius Peppers gets on the field for a stretch. The Raider D is decent, with play-makers like Charles Woodson and Tracy Porter in the secondary, but they’re not intimidating. If Chicago knocks them around early, don’t be overly excitable. Ease off the football throttle.

Damn right I just went Back to the Future on you.

We’ve been getting the impression for weeks now that D.J. Williams’ injury during camp could have been the opening that rookie Jonathan Bostic needed to win the starting job. In this third game, Bostic will need only to avoid major blunders to lock himself into the gig. He’s made some bad reads in pass coverage situations, but there’s almost no doubting his play-making ability and speed to the ball. Despite his fine/illegal hit, Bostic has been the most exciting Bear defender in the preseason.

Yay for consistency! Well, sorta. This week’s game should see Chicago’s starting five offensive linemen suit up and play into the second half. Kyle Long put his stamp on the starting right guard slot last week alongside rookie Jordan Mills, who quietly had a solid game at right tackle. These two first-year players are getting a lot of responsibility on their side of the line. On the left, Jermon Bushrod and Matt Slauson need to ensure their QB stays upright. Too many sacks have already been given up this preseason. Let’s see what happens with a quality line in front of my quarterback.

There you have it! I won’t be live-tweeting the game tonight, due to my presence being required at the wedding of two very close friends. (Ridiculous! THERE IS (preseason) FOOTBALL ON! YOUR LIFE JOURNEY IS SECONDARY!) So game on without my snark and I’ll be back Saturday with a review of the Bears’ performance!