It drew too close for comfort for a short while, but the Chicago Bears picked up their third win of the 2013 season on Sunday night, holding off the turnover-prone Pittsburgh Steelers.

On Chicago’s opening drive, there was plenty of promise to be seen as Cutler made quick throws from the pocket, most of which went the way of Alshon Jeffery. A behind the line tackle from Troy Polamalu may have helped end the drive prematurely, but a field goal from Robbie Gould put the Bears ahead for the rest of the night. A forced fumble gave the Bears the ball deep in Steeler territory, where Matt Forte’s two runs and a catch earned his team their first touchdown. His 55-yard run started off their next drive, whose conclusion was delayed as Marc Trestman decided to challenge the second of two likely goal-crossing runs from Michael Bush. At 17-0, I was getting comfy. It didn’t last long.

Cutler was under pressure as the game drew on, specifically in the third quarter, where the Bear offense was predictable and inefficient. The several draw runs up the middle were especially infuriating, but you could tell Trestman became more conservative with a comfortable lead. Although the incomplete bomb to Marshall on third and one was an interesting call. You won’t run the ball then?

That being said, we’re all going to continue hearing about the wood Jay Cutler laid on DB Robert Golden. It was delightful.

His scrambling mastery was followed up by a 41-yard pass to Brandon Marshall running down the left side. A sideline endzone throw to Earl Bennett was ruled incomplete, challenged, and subsequently overturned. At 34-23, the Bears offense had come up with a drive to earn the victory, without any special help from the defense to start the series. 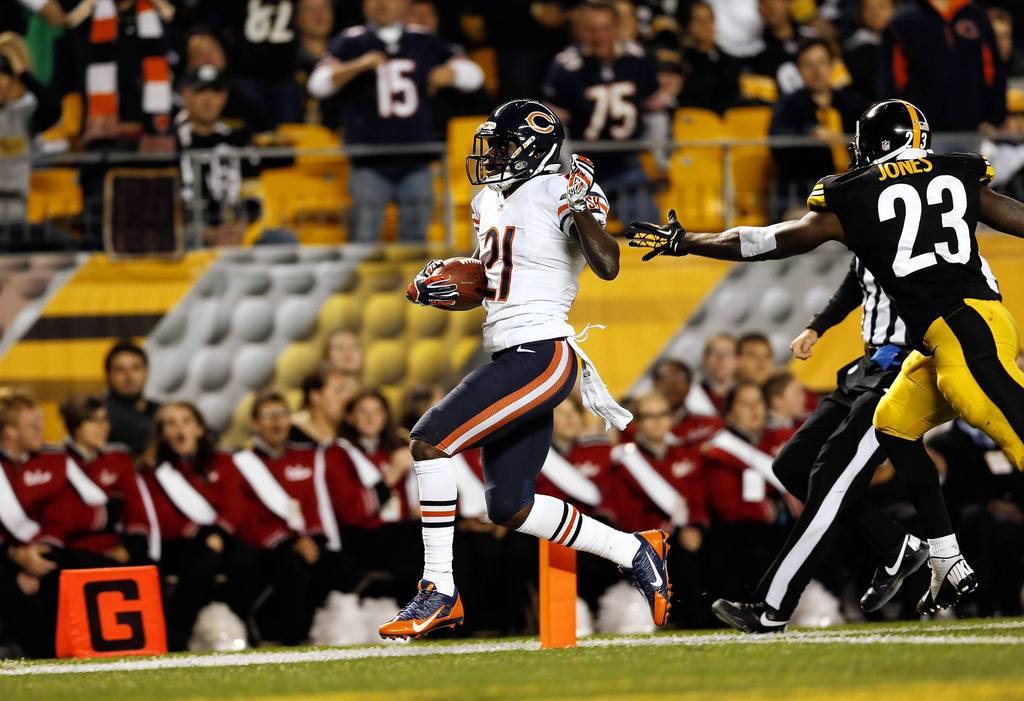 Speaking of the defense, I assume our strategy each week involves letting an opposing wide receiver tear us apart for huge chunks of yardage in order for someone’s fantasy team to get a win. Because Ben Roethlisberger passed for 406 yards on the night, 196 of which went to one Antonio Brown on his nine catches. Ridiculous. Which is also the word I’d use to describe Brown’s second quarter TD grab. Big Ben routinely scrambled in and out of the pocket, buying his receivers time to get open. When Chicago wasn’t blitzing, they weren’t getting sacks. So receivers were able to escape coverage (because you can only cover for so long until someone is free) and get receptions down the field. They found a groove through the air (something teams have been doing for some time against the Bears), but Ben’s four turnovers were too much for Pittsburgh to overcome.

Despite their yardage issues, the defense is providing evidence week after week why they are the best scoring defense in football. Linebacker D.J. Williams put his stamp on this game early on, stripping Ben Roethlisberger on the Steelers’ opening possession. On another blitz later in the game, he pulled down the Steeler QB for one of the defense’s three sacks on the night. Major Wright boomeranged Roethlisberger in the second quarter, putting the score at 24-3 and the game nearly out of reach. Wright then stripped running back Felix Jones early in the third, setting up another the second of Robbie Gould’s field goals. Late, Lance Briggs strip-sacked Roethlisberger on a blitz, causing the ball to fly out of Ben’s grasp and right into the waiting arms of Julius Peppers. 42 yards later the Bears had a 17 point lead and less than four minutes on the clock. Win sealed. They had chances for at least two more turnovers, one on a Ben fake pass to himself (he was lucky to get that back) and a Chris Conte sideline interception that at least was worth taking a look at (if the Bears had challenges left). We’re counting seven turnovers then, right? I’ll take it.

-I’ll bet Troy Polamalu is really PUMPED that he blocked that extra point, dawg. I mean, yes, I understand blocking that means it’s still a 17 point game (and therefore a three possession game), but what a waste of energy. The game is over Troy. I’m sure your team doesn’t want you spraining a knee ligament (again) just so you can get on a highlight reel. Settle down brah.

-Also on Ben’s super-fake, Henry Melton slumped to the ground with an injury, only to be carted off the field. We know now that he suffered an ACL tear, so his season is finished. It’s a shame too, because Melton was playing under the one year exclusive franchise tag and will hit the open market while rehabbing from a major injury. This is precisely why players hate the franchise tag.

-The Roughing the Kicker penalty was terrible, sure. But MOMENTUM SHIFTING? Maybe. The Bear defense still had plenty of chances to get off the field. Penalties happen. Don’t pay for them.

-Let us all show compassion for this man, who knows too well what he was witnessing.

We feel you, football friend.

What this win means for the Bears

It means they’re 3-0. (DUH.) More than that, it signifies that they can actually get out to an early lead and HOLD ONTO IT. Not every win needs to be of the “come from behind” variety. (Tell me you didn’t giggle at that.) Now the Bears can set their sights on Detroit, who at 2-1 is right behind them in the division race. A speed bump in this season’s road is surely coming, but being undefeated after three weeks means the Bears are ahead of expectations.