It Can’t All Change in One Night

Heading into Sunday night’s event, the first PPV since Wrestlemania 32, the WWE’s new “era of change” had too much hype for it’s own good. What started out as a valid storyline explanation of all the new talent and introductions became a subtle promise of something more. Shane McMahon was the on-screen representation of this sweeping change, but it’s still Vince McMahon calling the shots. Still, change is in the winds…

Payback’s pre-show featured Dolph Ziggler getting one over on the upstart Baron Corbin. Bad facial hair and leggings aside, Corbin’s on his way to being an integral mid-level cog in the wheel with some real potential for main event runs. Since Big Cass should be running amok in the tag team division, Corbin will have a clear path as the big man of the future on the singles scene. The pre-show’s other match between Kalisto and Ryback I’m told was fantastic. They really need to stop dropping these guys on the pre-show if I’m just gonna need to watch it later. ALL OF THIS NEEDS TO BE ABOUT ME.

Obviously the main show got off to a tremendously jarring start with the injury to Enzo Amore in the opening tag team match. It was frightening as hell in the moment, but Zo’s been released from the hospital with a diagnosed concussion. That’s the best outcome anyone could have asked for after seeing the horror of a knocked out Amore on the ground last night. Here’s hoping for a speedy recovery for the Jersey loudmouth.

The rest of the show was just full of legitimately good wrestling. Owens vs Zayn, Jericho vs Ambrose, and even Cesaro vs The Miz were fun to watch and had several exciting spots. I was troubled by that whole “making food to stuff into my mouth” annoyance during the early half of the show, so I’ll need a rewatch in the near future to truly appreciate these bouts. Especially since this morning, Chris Jericho sent out this tweet:

Thanks @wwe….its been real. See you next time.

Depressingly, that might signal Jericho’s latest run is over. He was the veteran heel we needed while numerous stars sat on the shelf. He’s the consummate professional, and his run helped launch AJ Styles into the match we all saw Sunday night. Evidence like his handling of the Neville in-ring injury are why the WWE will always need someone like Chris. If this is for real, I hope to see Y2J in a ring again soon.

Natalya challenging Charlotte for the women’s title probably had the best mat-wrestling of the night. That can’t be understated. The women’s division has quietly undergone a shift towards heavy story-telling in their matches instead of overly insane acts of athleticism. Until WWE can establish it can fit numerous women’s threads into their shows, their best bet is to make sure what they do provide is the best they’ve got. Payback gave us another classic between Nattie and Charlotte, even if the ending’s “screwjob” didn’t quite resonate with newer viewers.

Now, let’s discuss that main event. The ending was utterly predictable, despite the Styles near-finishes teased at every turn. While WWE didn’t bury the Phenomenal Forearm as a finishing move, the fact that Roman took about four legit finishers in this match and kept stomping through everyone says a lot about how Vince is going to book him in the future. He won’t be at the Brock-level of dominance, but he’ll just keep taking vicious amounts of punishment and then springing up with a punch to your face or a spear to your gut. Having Gallows and Anderson mix it up before the Uso’s join the fray was expected. They needed to pay off that feud and set the stage for Bullet Club 2.0 to be big players on the main roster.

All of that said, it was a GREAT MATCH. It was bogged down by the Shane – Steph feud (something I’m sure I’ll be saying about the product for weeks/months to come), but don’t let that fool you. Reigns, Styles, and the crowd were all amazing for this one. 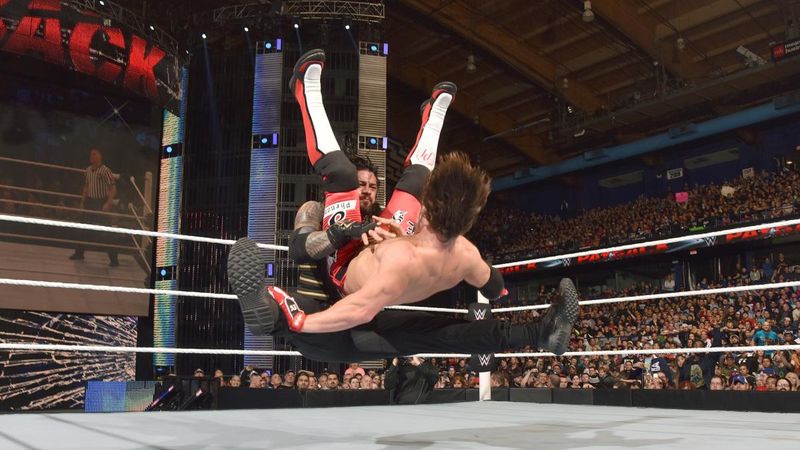 If you were desperately hoping for the SHANE ERA to mean wholesale changes to WWE’s title picture, than you probably ended Sunday night feeling disappointed. That didn’t mean it wasn’t fun to watch. There was some excellent wrestling to be found on the network. Though it’s clear the company has been listening to its fanbase, that doesn’t mean every night is going to be full of dramatic surprises or underdog winners. The fact that AJ Styles was in a title match in the main event of a PPV means your voice is being heard. Now it’s time for us to let WWE take the wheel. If Payback is the start of that road trip, then I’m fine with being a passenger.