Hey everybody! Welcome to Mostly Average Wrasslin’ Reactions, a still-evolving, semi-regular column in which I’ll comment (along with other opiners), commend, and critique the latest happenings in WWE (and maybe other wrasslin’ promotions if I feel saucy). Last night’s Labor Day edition RAW was a decent show that pushed forward a lot of the storylines we’ll see “resolved” at Night of Champions. (Or merely “continued.”) Some segments were great fun, others fell flat. Let’s talk a little about where WWE’s stories are right now.

– Right now Seth Rollins is carrying TWO major feuds every week, basically on his own. Last night’s opener saw him cutting promos on Sting AND John Cena. At Night of Champions he’ll pull double-duty, which can only be awesome, given the significance of his opponents and the straps being on the line.

– New Day. Now they have a trombone!

There’s nothing about New Day that isn’t awesome these days. Each member brings something great to the table. And it’s always entertaining.

What Could be Better

– So the Divas Revolution is still going… strong-ish? We had a decent match between Paige and Sasha Banks last night, setting up a nice secondary feud outside the title picture. And then in what appeared to be nothing more than a Bella basic bitch celebration, we had Charlotte appear and reveal that she’s moved up her title match to NEXT WEEK, where a victory would actually stop Nikki “Booty-Popping” Bella from becoming the longest reigning Divas champ. Now, this is a massive tease. One that could remain unfulfilled if they book some non-finish, forcing a rematch at Night of Champions. That would blllooooow.

STOP WITH THE CUTE. I NEED MORE.

– God do I need less talking. The announcers could take a breather. I don’t need 20 minutes for every opening segment. But now I’ve got too many characters who need to mouth off. I want Braun Stroman only spouting one word threats. I don’t care that he has the PERFECT voice. We already have Bray Wyatt’s long-ass soliloquies. He doesn’t need any help. Stroman just needs to stand around and be threatening.

Which is exactly my same recommendation for Sting. The more he talks, the less dangerous and mysterious he becomes. Just have him walk around gesturing at things with his baseball bat. I don’t need him verbally taunting Rollins about his precious statue. 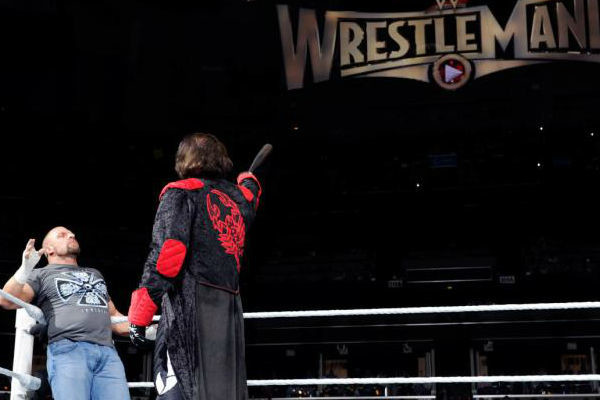 – Orton vs Sheamus: XXXIV. Honestly, can this feud die already? They just keep trading wins and we’re supposed to be entertained just because it’s two “high-profile” guys. I don’t even need to see Orton mixed up with Reigns and Ambrose, because WHO CARES.

What Makes Me Hopeful

– We saw a brief glimpse of awesomeness in the eight-man main event on Raw following Summerslam, but I didn’t think WWE’d actually follow through with this pairing. Last night another crumb was teased to us, as Kevin Owens poked at the “Big Guy” before Ryback’s mediocre match versus Rollins. Owens might be someone I’d be legitimately interested watching feud with Ryback, which is saying a lot.

What Makes me Frightened

– This Zigger-Rusev feud has been dragged out for months longer than it should ever have been, thanks to Rusev’s foot injury. This plot has been filled with perfect soap-opera drama, complete with Summer Rae acting the shit out of her monologues describing the “shower incident” between her and Dolph. Last night’s RAW saw some epic crying face from Summer and even a giant Rusev thumb smearing her lipstick all over her chin. That said, it’s still awkward. WWE went from one blonde freeing herself from her belligerent boyfriend to another blonde being dubbed sweet and “submissive” by that SAME asshole. Cool. Now a broken wrist for Lana means we won’t see that mixed-tag match feature Summer and Lana that we’re all dying for. Ugh. How long can this go on?

There you go! Did I miss something? What are you loving/loathing these days?

This feature will be undergoing a ton of changes with each iteration, so bear with me. I’m also catching up on my NXT so I can include it in later posts. There’s so much wrestling! Any suggestions can be emailed or posted in the comments!