Well, it finally happened. On Wednesday Disney Interactive Studios announced that Marvel Comics characters would be making their way to their insanely collectible and kid-friendly game Disney: Infinity. But don’t let me just TELL you about it. Here’s a squee-inducing trailer:

I’m immediately thrown into a tailspin of ideas for how awesome the Marvel stuff could be. If you’re unaware of how this Disney Infinity thing works, it’s sorta simple. You buy the game, just like any other video game. Only it comes with a physical apparatus that serves as a reader for the collectable figurines (like the ones below) that are sold in stores. 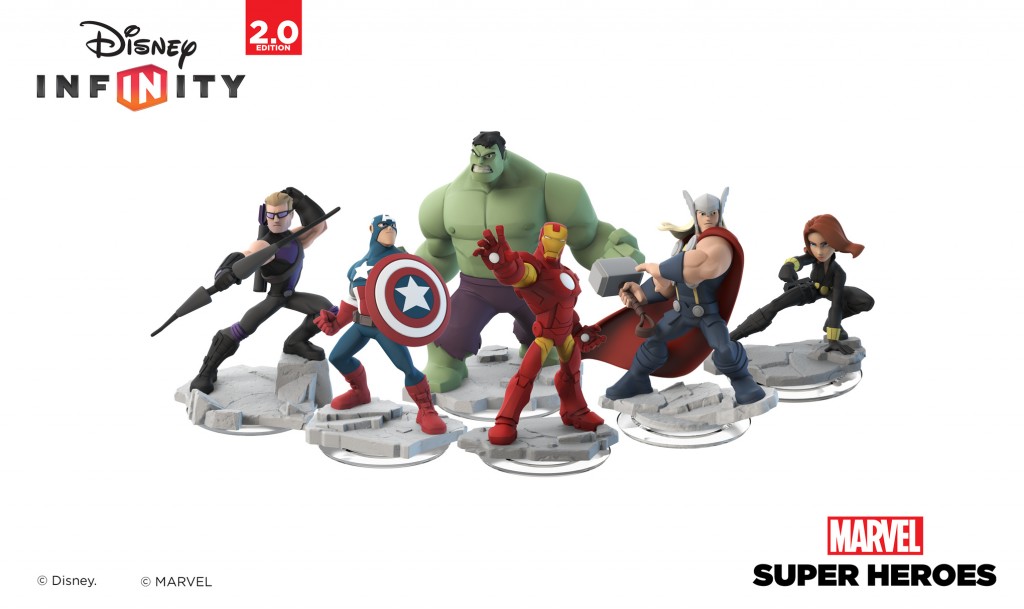 Before this unveiling, the only characters featured in DI were classics such as Jack Skellington or Sorcerer’s Apprentice Mickey, from Pixar flicks Wreck-It-Ralph, Frozen, The Incredibles, and Cars, as well as cartoony versions of The Lone Ranger and Tonto. Now DI is stepping up their game.

This will be the “second phase” or “Version 2.0” of the game, which will be fully backwards-compatible with the first releases. A starter set featuring the game will come with figures of Iron Man, Thor, and Black Widow, along with the other accoutrement like the customary “power discs” as well as a base that serves as a reader for the figures. This will drop in the fall, with other characters like Captain America, Loki, Hawkeye, Green Goblin, and Spider-man (YES) confirmed for later releases.

So I have all the thoughts about this game. Let’s talk.

-I immediately want all of those little plastic fucking money-suckers. They’re going to look perfect occupying every centimeter of free space in my apartment. (Sorry Virginia.)

-As far as the main game goes, I’m worried that it will be little more than a re-skinned LEGO Marvel Superheroes (which was fun as hell, by the way). There will be a large-scale Marvel New York city for the heroes to play around in and screw around with.

-Aside from the “adventures,” it’ll be fun to use Marvel stuff inside the game’s Sandbox, where you can essentially create whatever you want, though only with the things you’ve collected and unlocked as far as I understand it. There you can have Captain America sail on a ship alongside Jack Sparrow and attack Elsa from Frozen. Anything goes in the sandbox, bro.

-The Spidey in the trailer is non-descript (and not on the screen long enough), but at first glance it looks like the character design from the Spectacular Spider-man series. I’m down with that. It’s perfect for this universe.

-It was detailed that comic scribe Brian Michael Bendis was pitching in on the writing, so hell, there has to be a plot somewhere, right?

-Sorta off topic, but WHERE IS THE MALEFICENT FIGURE? There better be an eventual release, but it would have been nice for them to have something out in time for the movie. Anyways, I digress…

-This really does set the table for other properties like Stars Wars and Indiana Jones to join the fray as well. If the Marvel set succeeds, there will be an avalanche of great stuff coming down the pipeline.

Get your wallets ready… it’s time to Assemble.

What are your thoughts on Marvel’s inclusion into Disney: Infinity? Will you be picking this up, or is it still too “kiddie” for you? Comment away!