So there I was, minding my own business in GTA V, plowing through red lights and meeting up with strippers for after-the-club fun when I get a text from my brother:

It wasn’t until I checked Twitter that I realized he meant the Colts. (Not that my NFL-riddled brain didn’t automatically translate the typo into Colts, but it’s funnier if I don’t know right away.) It struck as me an aggressive move with some legitimate repercussions for the AFC. And as rare as trades are in football, it’s worth dissecting.

Taking a break from my crime spree to gather the facts, I realized this trade lets both sides accomplish specific goals. Let’s break it down! 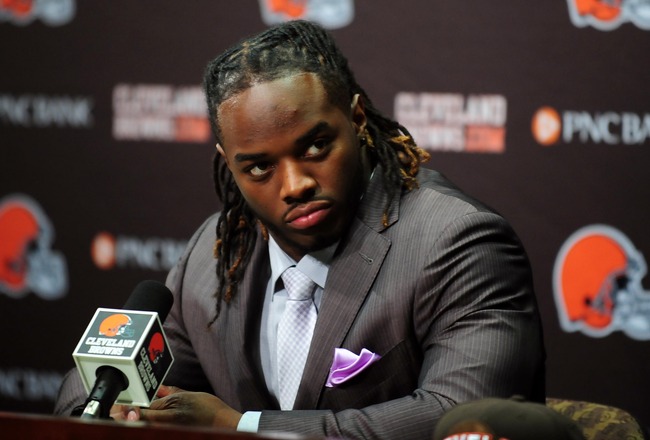 “Why yes, this is the greatest day of my life. I’M OUT OF CLEVELAND Y’ALL!”

Why this deal makes sense for the Browns:

GM Mike Lombardi and Head Coach Rob Chudzinski are making a few strong statements this week. First, by benching sorta-injured quarterback Brandon Weeden for Brian Hoyer, they’re saying “Sorry Brandon, you’re not our guy.” Trading Trent Richardson proves their lukewarm feelings on the running back, and nets them another first round pick next year. If they’re not god-awful and therefore in position to draft a franchise quarterback (something Lombardi knows he needs), this extra pick gives them the flexibility to go up and get one.

But really, this move is an indictment of the 2012 Draft moves by the prior regime. Richardson and Weeden were the 3rd and 22nd overall picks in that draft. Lombardi and Chud decided to quickly move on from the organization’s past mistakes and get their team on the field in 2014. Now they can. They just had to mostly quit on the 2013 season to do it. Don’t tell me they didn’t quit, either. They’re experimenting with Brian Hoyer and traded away their top running back. They’ve stepped out to lunch for the next 15 weeks.

Why this deal makes sense for the Colts:

The Colts are trying to win NOW. But they just lost Vick Ballard for the year, leaving them with injury-prone Ahmad Bradshaw as the only credible running back in the backfield. Owner Jim Irsay recently tweeted how he needed to see more from his offensive line and how GM Ryan Grigson would be diligent in his scouring of the running back market. He obviously wasn’t kidding. Andrew Luck has a solid cast of receivers and tight ends, but running back was a point of concern in this young season. Another likely early 20’s draft pick isn’t some golden nugget that needed to be held onto. They made their team instantly better by trading for a running back, a position that is notoriously easy to plug into an offense. It’s not like they’ve acquired a brand new quarterback. All Richardson has to do is find the holes and run through them. I don’t think it makes them a Super Bowl contender, but they’re better today than they were yesterday.

How do you feel about the trade? Are there any Browns fans weeping into their uh… brown pillowcases? I don’t know what football fans weep into. Crappy beer? Anyway, leave me a comment and let’s chat about it.