Well, every LeBron-hater and Heat-knocker in sports land had their guffaws and cheers at the expense of Miami’s title hopes, as the Heat ended the 2013-14 season by losing their third straight game to San Antonio. With the Spurs winning the NBA Championship, the Heat will have to be content with four consecutive NBA Finals trips and two titles. Regardless of their current disappointment, that’s a fantastic run no matter how you look at it.

Despite their notable accomplishments since choosing to band together in the 2010 offseason, too often I find myself defending James and his fellow Heatles, to the point where I am now one of their staunchest advocates without even realizing it. Now that they’ve lost the NBA Finals (which automatically makes them less hate-able), I feel like its time to debunk all the criticisms and complaints against Miami’s squad. 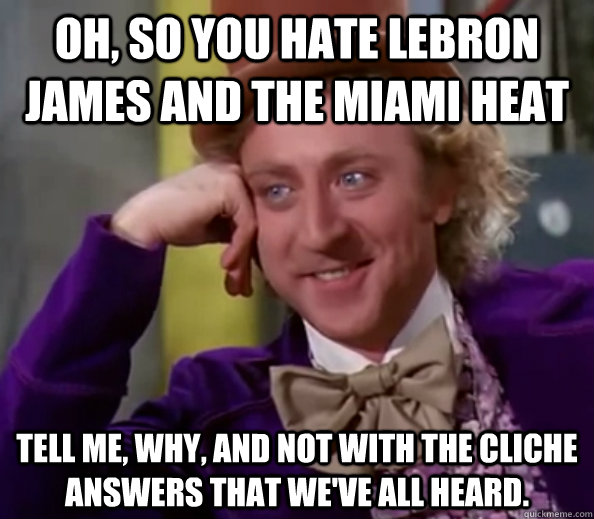 “They Took the Money”

This is straight up FALSE, but I hear it on a regular basis, oddly enough. If you know anything about how NBA contracts work, you’d understand it’s actually impossible. James, Wade, and Bosh all took less money to play together in Miami. Does James make an extra crap-load of money from his endorsements? You bet. Does the lack of no state income tax in Florida help? Abso-freaking-lutely. But you can’t sit there and tell me any of these guys chased the money. It’s simply factually incorrect.

Um, they’re the opposite, actually. Let’s run through a scenario here:

You and your two friends are awesome graphic designers. Like, top fifteen in the country-level awesome. You’re each the lone stand-out performer at your firm and have been for years. In fact, you’re the reason that firm even sees the amount of success it does. You could stay there the rest of your career and make unfathomable amounts of money and be without the Top Dog, BMOC, or whatever else you want to be called. The Duke of Designing? They’d call you that. All-day, every-day.

But you’re definitely not the best design studio overall. The other successful teams out there pull in the best clients and create the best work and you have to take on “lesser” jobs while aided by teammates and management types that are, quite frankly, not giving you the help you deserve. You’ve given them seven years of your life and feel like its time for a change.

So you and your two friends decide to team up. You can have your own design firm and be the ABSOLUTE BEST design studio out there AND work with two of your best friends at the same time. The trade-off? You downgrade from making “unfathomable” money to only “ludicrous” money. You’re still rich as hell, but now you can enjoy being the best designers in the world.

Got it? Okay, now replace all that design-crap with the appropriate basketball term. That’s what James, Wade, and Bosh did. Does it sound selfish now? They toiled for YEARS on their respective teams, and only Wade had a title to show for it. (A title that feels like forever ago.)

I’ll tell you what I always say when someone presents me with this “selfish” accusation:

This is exactly how I want my athletes to act. They ignored the clogging rules of the NBA salary system and the semi-collusion of the owners to make a choice together. They took less money to win titles and play together. These acts are all evidence of unselfish behavior.

“The Heat Bought a Title”

First of all, they bought two titles. Let’s give them credit at least. And second, how is this a problem? It’s any front office’s responsibility to put the best players on the floor through free agency and the draft. If the players you’re drafting aren’t panning out, then you have to take a different route. They still have Dwyane Wade, whom they drafted. LeBron, Bosh, Ray Allen, and a lot of the other Heat players just decided to leave their teams and try to win a title. They’re not breaking or cheating the system by doing this. Players want to sign there because they know it gives them one of, if not the best, chance to win.

You know who DID try to buy a title? The Brooklyn Nets. They managed to pull in aging former All-Stars, blowing past the NBA’s soft salary cap, in the hopes that they could gel quickly enough and complement each other on their way to a ring. It was an expensive and costly maneuver that ended up failing because Deron Williams is crap and Brook Lopez broke his foot.

But I ask this question? Since when is trying to buy a title a bad thing? Isn’t that the whole point of “the sports?” TO WIN FUCKING TITLES? Who the hell cares how championships are won, as long as THEY’RE WON? If the Bears won the Super Bowl this season, I wouldn’t give a sliding shit how they pulled it off. (Unless they had to trade Jay Cutler. I’d have a mini-cry about that one. But I’d get over it.) Every owner in every league for every sport should be willing to spend the extra dollar (and in Net owner Mikhail Prokhorov’s case, tens of millions of dollars) in pursuit of legitimate championship aspirations. You see how often cheap and frugal owners let their teams fall short of even Sportscenter-relevance, much less sport supremacy.

And to be fair, the Heat just happened to be the team that worked out the best for all three of them. It could have been Cleveland or Toronto, but the trio trusted Pat Riley and his vision. Riley saw how the Boston Celtics won their title with a “big three” and decided to do it better and younger. And even if it ends up being only a four year experiment (which is unlikely), no one can argue it hasn’t been a success.

Most of these nonsensical “bought a title” criticisms arise from sheer jealousy. You can’t tell me that Knick/Celtic/Grizzlie/Laker/______ fans wouldn’t be cheering their faces off this summer if their teams turned out to be the locale of a Carmelo/LeBron super-pairing. It’s fine to hate “successful” teams. I mean, the Yankees are hated because they spend money to WIN every year. And lately, they’ve been failing at that, which makes it funny. The Red Sox used to be lovable losers until they started spending like the Yankees. Now? Their recent success has eclipsed their rivals and they’re almost as hated. Their fan base is certainly a pack of ravenous douchebags.

Face facts. If they could, you’d want your team to buy a title too. You’re just jealous they can’t.

LeBron James gets shit on every day for everything possible. The Michael Jordan-James comparisons are exhausting for me, because they’ll both be among the top five to seven players in NBA history when it’s all said and done. Is LeBron ever going to get to Michael’s level? Depends on the supporting cast around him. James still has plenty of time to win several more titles in a league where having the best player means more than any other sport.

But there’s a level of hate for LeBron and his brand/personality that I just don’t get. If you’re a non-Clevelander that for some reason still hates James because of The Decision, well, I can’t help you. You’re a curmudgeon and just want to hate things. Was that whole process handled less than wonderfully? Sure, I guess. But ESPN made it the biggest story ever and offered him a primetime slot to announce his new destination. He then donated all of the advertising proceeds to the Boys and Girls Club of America. I refuse to rail on a dude for that.

LeBron’s personality isn’t that jarring, either, despite what you may hear. Every athlete with a public profile like James’s is going to have an ego. But he’s said repeatedly that he only cares about winning and doing whatever it takes for his team to reach the top. You saw that during these playoffs as he played with a hampered supporting cast. Wade was/is a shell of his former self. Bosh no-showed plenty of times. But not James. He came to play every night, no matter if he needed to be score thirty-five points, dish out eleven assists, or defend the best player on the other team all night. LeBron has one of the best all-around games I’ve ever seen. He does things on the court no one else can do. And I’m more than a little confused by the never-ending barrage of personal attacks. He’s a fairly nice guy, considering that the sports world anointed him as “King” while he was still in high school.

***Post-publishing note: LeBron opting out of his contract doesn’t mean much of anything. It was expected. As is his re-signing with the Heat.

Let’s wrap up this monstrosity for cryin’ out loud, before the next NBA season is upon us. If you want to hate the Heat because they’re better than your team, by all means. But don’t hate them for the wrong reasons. Be a better sports fan than that.

You should hate the Heat and enjoy it when they lose because their fans are terrible and leave early even when their team is winning. Agreed?