As much as I want to talk about Thursday night’s upset, I can hold off and save it for The Final Drive. We have plenty of other stories to talk about. Week 15 is getting down and dirty with some of these division and wild card races. Drama in the nation’s capital is brewing (as always). Are you ready for The Opening Drive? Of course you are.

The shit-storm is still churning in Washington with what looks like a intense attempt by Mike Shanahan to get himself fired. Benching RG3 for Kirk Cousins has a lot of ripple effects that don’t have just to do with the spat between head coach and owner. Does RG3’s irrational confidence become shaken? Can Shanahan get another coaching job this offseason after all these shenanigans? If Kick Cousins plays really well (which he invariably will against the Falcons’ wounded secondary), will the cries for him to start get even louder? Or can Washington deal him for a second round pick? (Or a first rounder if someone is desperate and stupid. Looking at you Oakland.) This game isn’t all that relevant, but off-the-field stuff is.

But if all else fails for Shanahan’s schemes, I suggest this be his next move:

Divisional game? Check. A division title already secured? Check. A desperate team trying to snap an 11 game losing streak? Check. An otherwise meaningless contest? Check. Okay, I’ve gone through the list. This has to be the “Trap of the Week.” With all the talent on Houston’s roster, can they really lose 14 straight? Against a soft Colts squad, they might rebound, if only for a day.

With Denver’s loss on Thursday night, the Patriots now control the one seed for the AFC playoffs. All they need to do is win their final three games… without Rob Gronkowski, who is out for the rest of the season. Sure, that’s no biggie, right? Yeah… wrong. The Patriots are vastly inferior in the redzone without Gronk, which means their offensive output is going to drop off significantly. Combine that with a defense that can’t stop any running game and the Patriots can’t be anybody’s Super Bowl favorite. (Anybody outside of Boston, that is.)

So… Matt Cassel is starting for the Vikings now? Right? Anyone care to fact-check that for me? Because I don’t care anymore. We all know they don’t have next year’s starter on their roster. The Eagles, on the other hand, may have found theirs. Nick Foles has been astoundingly solid in Chip Kelly’s offense and has the Eagles in first place in the NFC East. Philly’s chances of winning on the road improved dramatically thanks to the reports that Adrian Peterson won’t be suiting up. Now the Viking offense will center around… Greg Jennings? Toby Gerhart? Jerome Simpson?

I think we’re going to have several instances of Manning-Face in this game. Seattle’s defense will be twitchy-angry after losing in San Francisco last week, so I think three interceptions and four sacks of Eli will ease their tempers. I’m sorry, were you expecting me to say something useful about this game? Uh… Giants blow.

The way I’ve bounced around writing this column, this is the last game for me to cover. I’m all out of witty by now. The Niner offense is easing into mediocrity, up from their sheer one-dimensional showings a few weeks ago. Having Michael Crabtree back in the line-up does wonders for Colin Kaepernick as he’s not only Kaep’s favorite target, but it pulls coverage from Anquan Boldin, Vernon Davis, and Mario Manningham. Suddenly that receiver crop doesn’t look all that bad.

The AFC West is ultra-competitive these days, but it’s not because of anything the Raiders are doing. Oakland has lost three straight and five of their last six, which shouldn’t be stunning news for a team that owns a 4-9 record. Kansas City blew the doors of Washington last weekend, a nice pick-me-up after a three game losing streak of their own. The Raiders suck and the last time these teams played each other, the Chiefs had nine sacks. Moving right along…

The Jets might be the worst 6-7 team I’ve ever seen, but they’re so inconsistent I can’t tell how actually sucky they are. On the road against the Panthers (who are undoubtedly pissed after losing to the Saints), the Jets are going to get whomped. Geno Smith? Meet the Panther front seven.

As I write, Aaron Rodgers has still not been cleared for game action, meaning it’s unlikely he’ll step onto the field Sunday. That means Matt Flynn will once again take the reins of this offense. He’ll have to match Tony Romo and the Cowboys, who have a dynamic passing attack and are starting to fit in small doses of DeMarco Murray and Lance Dunbar out of the backfield. Dallas controls its playoff destiny, so don’t expect a Rodgers-less Packer team to go into Big D and come out with a win. 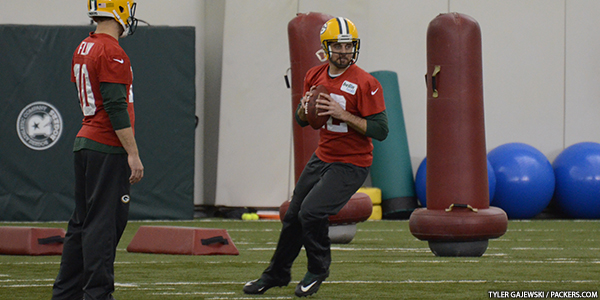 Oddly enough, these teams aren’t that dissimilar. Both quarterbacks can be turnover-prone, but their hot streaks are almost as good as anyone’s. Both defenses are aggressive and aren’t likely to be blown out. But the Cardinals simply have more playmakers on offense AND defense. It’ll be closer than it should, but Arizona has no business losing this game. (Unless Palmer decides to out-Palmer Fitzpatrick.)

One team has Drew Brees. The other has Kellen Clemens. WHY ARE WE STILL TALKING ABOUT THIS?

I’m just as confused as you are, T-Swizzle.

Almost certainly out of the playoff mix, the Steelers would love to play spoiler for the Bengals, who are trying to catch up in the fight for the one or two seed in the AFC. For the first time in like, a super long time, Cincy is favored in Pittsburgh. Andy Dalton’s up and down season hasn’t hurt his team too badly, thanks to a stingy defense and Giovani Bernard’s progression at running back. If they’re going to earn a top spot, this is a road game that have to win.

Monday night’s match-up pits two playoff hopefuls against each other. And since it’s on ESPN, I can only imagine the sheer emotion that will be exuding from Ray Lewis as he watches his former team from the sidelines. Or not. I really don’t care. If this could end in a tie, I’d be happy. I hate both of these teams, but it’d be funnier if the Lions continue to implode. (But then I’d have to deal with the annual “the Ravens are the team no one wants to play” BS. I can’t win here, can I?)

And I’m off! Enjoy your Sunday of football!