No more fake football. No more preseason pontificating. No more waiting. Week one in the NFL starts in earnest today, and that means The Opening Drive is back! Normally I’d shoot through the best or most interesting games of the week, but since it’s week one, I’m going through them all! (That and I’m a glutton for writing punishment.) Let’s kick this pigskin.

Oh, and I’m not wasting time adding their records to this list. Everyone’s 0-0. You get the idea.

Both squads have high(er) expectations this season, but that doesn’t mean this game will be super fun to lay eyes on. It’s likely to be a defensive struggle as both squads acclimate to their new offenses for an entire game. Some putrid score like 16-12 is befitting.

Squee. The Saints are going to blow up at the Superdome today. Brees will try and out-do Manning’s seven TD’s from Thursday night. The Falcons won’t be a bad team this year, but I’m guessing they’ll look like one today. The Saints are angry and ready to light them up.

Oh god. Here’s the clunker of the week for sure. The Jets are starting rookie Geno Smith versus a secondary that will likely include Darrelle Revis… in a revenge game. Josh Freeman is coming off a craptastic preseason where he nearly lost his starting gig. LET’S GO OFFENSE! Uh… any offense! The Jets have an actual shot to win this game… which nearly everyone will overreact to.

Pittsburgh. At home. On opening day. Against a team that’s only requirement is that they be able to run the ball? No freaking way. The Steelers could crap the bed, but their run defense is too good to let this game through their fingers. (But seriously, I could see this being one of those shitty 9-6 Steeler wins. It’d be SO them.)

The Vikings are without their defensive tackle Kevin Williams and their fullback Jerome Felton, so you’d think their advantage over the Lions wouldn’t be all that apparent in a road game. But it’s the Lions. So this is certainly my “Trap of the Week!” Adrian Peterson might just destroy this over-pursuing defense.

As holey as the Colt defense will be this year, they will still be able to handle the Raiders and the college offense they’ll be putting on the field. I don’t care if Flynn or Pryor starts, they can’t keep up with Luck. 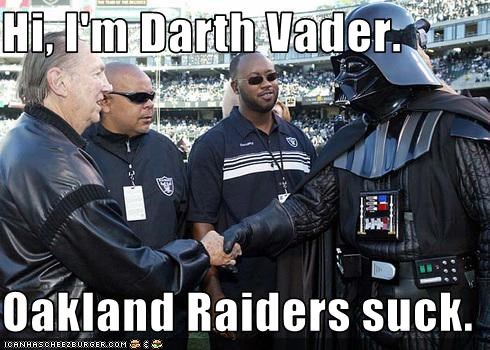 What’s with me and the Star Wars references today?

Let the domination commence! Carolina will be a tough test on the road, but there won’t be many games where Seattle isn’t the favorite. Their defense is too damn good. Wilson might throw for four touchdowns against this Panther secondary.

Jacksonville has the tiniest of chances to sneak out a win at home in their opener. But even Alex Smith can’t keep me from picking the Chiefs in a close win.

This NFC West divisional match-up is to determine who gets the leg-up on the race for third place. Rams are at home. Someone will boomerang Carson Palmer. Twice.

“America’s Game of the Week,” the pretentious title FOX slaps on their afternoon game, might actually be a deserved moniker this week. This rematch of last year’s playoff BEATDOWN will be oh-so-exciting to watch. In ‘Frisco, I might normally lean towards the Niners, but I don’t think they’ll have the weapons (Crabtree, Manningham out) to match points with Rodgers and company.

You mean NBC is airing an NFC East game Sunday night? And it features the Giants? AND THE COWBOYS? THIS HAS NEVER HAPPENED IN THE HISTORY OF EVER.

My sarcasm was switched to 11 for a second. Sorry. The Giants seem to have the ‘Boys’ number in Dallas’ building for some odd reason (the Cowboys haven’t been that good), but these teams are destined to hover around .500 in 2013. Toss-up.

The first of Monday night’s double-header features the arrival of Chip Kelly’s new-look, up-tempo offense and the return of Robert Griffin III to game action. Griffin won’t have to do all that much in my opinion, as Washington only needs to pummel the Eagles’ new 3-4 on the ground and keep Vick and company on the sidelines. Philly could have 3 1/2 minutes in the time of possession column when it’s all said and done.

I appreciate that it’s not just a Seattle/San Fran/Oakland/San Diego game. This is usually a strictly [Conference}-West affair. But I’m not buying the Chargers as anything more than a stepping stone team this season. As in “the Texans will be stepping all over the stone that will be Philip Rivers in week one.” Did that make sense… at all?

Thanks for reading everyone! I’ll be tweeting through the day’s action @MostlyAvgJoe, so come follow me and read the snark in real time!