Here I sit, with a 71% completion rate in the recently released Batman: Arkham Knight. Rocksteady’s Arkham series holds a special place in my gaming library as a rare set of games I’ve actually beaten in a timely manner. I’ve spent months playing games like Dragon Age: Origins before I’ve beaten them. I’m STILL playing Skyrim and Fallout 3. I love me some Batman, and the Arkham series has a been a perfect blend of addictive gameplay, taut story-telling, and well-designed missions. Arkham Knight is certainly no exception. It’s fantastic fun. The new additions add more variety to the action, whether it’s dual-takedowns with Catwoman, Robin, or Nightwing or recklessly veering through Gotham streets in the Batmobile, which is way more fun than I even thought it would be. (Seriously, if you’re not having fun in that tank, you’re probably doing it wrong.)

All that said, the game isn’t perfect. It has one major flaw. And anyone who’s played the Arkham games knows what my gripe is going to be:

If you’re not familiar, they’re simply little green question marks you collect, through simple exploration or solving puzzles or riddles. In Arkham Asylum, they were annoying, a weird but simple sidetrack whilst pushing through your missions. In Arkham City the rules were changed. They were strewn about the cityscape, meaning covering every nook and cranny (or interrogating every damn Riddler informant) was on your agenda for 100% completion. In Arkham Knight, that formula has returned, only now a secret ending is revealed when the game’s tracker hits 100% completion…

…meaning you have to collect every one of 179 trophies in order to see the game’s ACTUAL FUCKING ENDING.

While that’s not the only annoying thing in your way to utter completion (there are only 37 riddles to be solved), running around and collecting 179 of ANYTHING in a video game is annoying as hell. Especially when most of those trophies involve some sort of wall-switch/power source/pressure pad puzzle to obtain. It’s an utter waste of time when you could be running around kicking ass and taking names. Or better yet, Batman would probably send the effing GCPD to collect all those stupid neon bastards while he went and found the Riddler himself and proceed to BEAT THE HELL OUT OF HIM FOR CLUTTERING HIS CITY WITH 179 FUCKING DUMBASS TROPHIES. 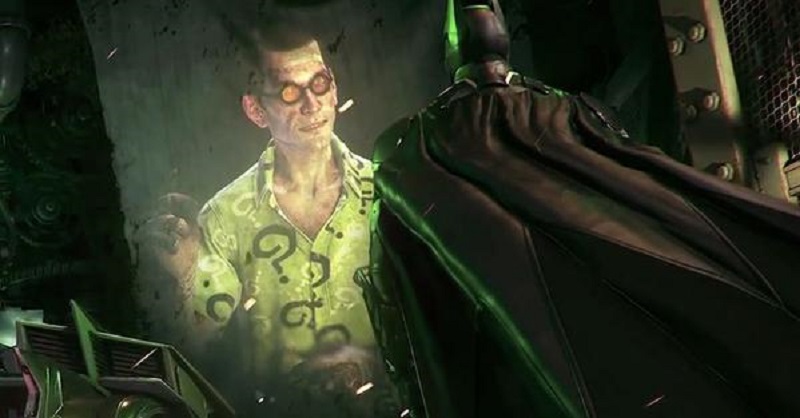 “I’m going to break your jaw for making me do this.”

You’re probably thinking I could just go to Youtube and watch the third “secret” ending without doing the work. Yeah. I could Captain Helpful, but that’s not the point! I want to earn the ending without feeling like I’m just wasting my time!

Collectibles in video games are ungodly annoying. They artificially inflate the game’s length with petty searching, time which could be used on the next freaking game in my admittedly hefty pile of shame. A game that would maybe take me 15 hours now takes me closer to 20 thanks to this collectible business. And the rewards (aside from aforementioned secret fucking endings) are rarely ever worth the effort. I picked up a trophy yesterday and I was generously awarded the notification of “Briefing Room Concept Art Unlocked.”

…Concept art. Of a briefing room. For bad guys. Not exactly fueling my desire to find ’em all. If you’re telling me every 10 trophies I collect gets me a new skin for Batman or his allies, now you’ve given me a little incentive. But concept art? COME ON.

So Rocksteady (more specifically Warner Bros, since Rocksteady might be done making Arkham games), please… no more Riddler Trophies. Ever. We’ve had enough.The next time I’m running across the rain-soaked rooftops of Gotham, I’d appreciate if you don’t slow me down with the empty reward of a glowing green question mark. Let it go. That way the next time I write about an Arkham game, I won’t have to use so many F-bombs.