So I know everyone has been just as lonely as I have without giant robots making splodey’s at each other recently. For those suffering this terrible affliction, Michael Bay has brought us the trailer for what is surely a gem of cinematic purity:

Okay, you know how this works by now. We watch a trailer, then I whip through some idiotic thoughts and commentary. Ready? Break!

-We can see initially the billboard that reads ” Remember Chicago,” proving that this Transformers flick is indeed set in the same world as the prior three. You know, a world that has been forever changed by shape-shifting robots doing battle with each other. That kind of world.

-Optimus Prime is sure loving that sword. I mean, I don’t blame him. It’s clearly badass.

-Gee, can’t have a Michael Bay movie without a young lady running around in clothing that doesn’t exactly coincide with her surroundings. (She lives on a farm. Or something. It’s country-ish, is what I’m saying.) Who’s she trying to impress? Those shorts would almost be ridiculous if I hadn’t remembered Megan Fox’s motorcycle garage get-up. 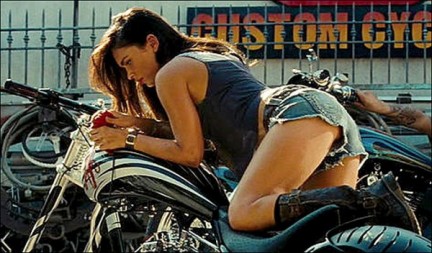 -Why THE HELL is Optimus Prime junked up in Marky Mark’s garage? What government butterfingers managed to lose a TRUCK THAT TURNS INTO A ROBOT? Also, he’s got flames. Hard to misplace that.

-Speaking of Mr. Wahlberg, I can’t believe I’m about to say this: he’s gives the leading role an air of near legitimacy. Shia LeBweaaff was just about the worst thing ever and I never believed he was even helpful comedic relief, much less the hero. Wahlberg’s got guns (figuratively) and looks like he could maybe take care of himself in a shit-storm for longer than two minutes without peeing his pants.

-Every time I see Bumblebee I get a little happy inside.

Otherwise, this trailer looked like another Michael Bay clusterfuck, complete with a re-used plot: “We don’t need you transformers anymore… until bad aliens show up. Then we’ll totally need you.” Yeah, because we haven’t seen that twice already. Thanks Michael! Still, I’ll probably see it. Why?

Transformers: Age of Extinction is set for a June 27th, 2014 release.