Week eight in the NFL was a wondrous exercise in relaxation as my beloved Bears were on the bye. Therefore I could sit back and enjoy as the rest of the league kicked the crap out of each other. And did they ever! Let’s kick off this edition of The Final Drive!

We started off the slate of NFL games with this clunker, which featured perhaps the best costume in the history of fandom. 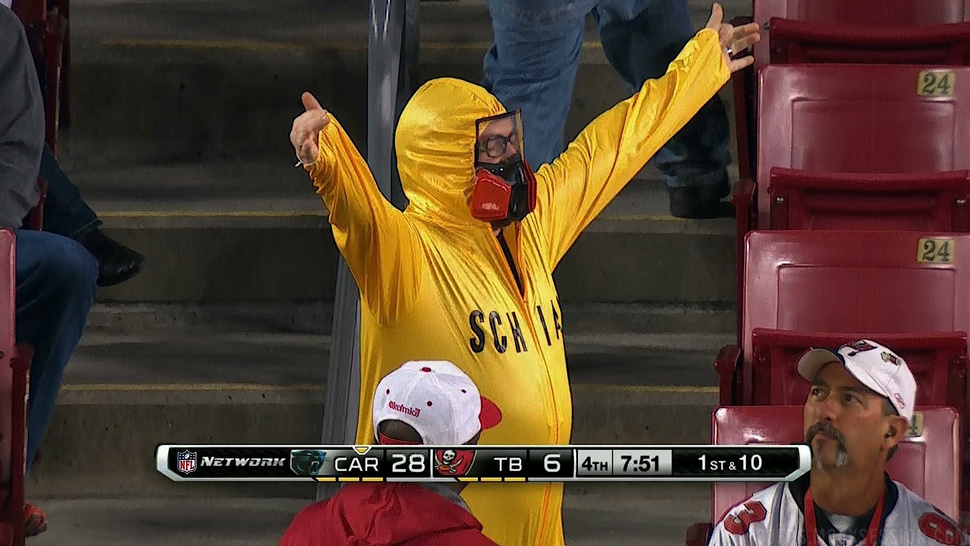 I was desperately hoping Greg Schiano would be fired at halftime, but alas, it was not to be. Instead, his team continued their self-destruction. He’s now considering the possibility of using Darrelle Revis in more man coverage. LET US ALL HAIL GREG SCHIANO, CRAFTER OF MEN.

SO MUCH TO TALK ABOUT. There’s obviously the Dez Bryant “was he ranting or not” display on the sidelines during the game that got so much airtime. The audio of that tirade has been released, and it’s pretty tame. I’ll admit, I thought Bryant looked extremely petulant on the sidelines. Mostly because he was aggressively waving his arms and yelling at everybody in his path, the bulk of whom had to acknowledge his screaming before going to do actual sideliney things.

And there was the Matthew Stafford goal line touchdown that no one knew was coming, including Stafford. It was a ballsy play by a rising star in the league.

But for realsies, this needs to be about Calvin Johnson.

Yes, Calvin “So sorry for being a freak of nature ohwaitImnotsorry” Johnson. He had 329 yards on 14 catches Sunday, with only one Tee Diddy to show for all his hard work. (He was tackled inside the five yard line… twice.)  Johnson almost single-handedly carried his team to victory, even when they were down six with under a minute left. He’s the best receiver in the game. Hands-down.

The Chiefs are a soft 8-0. Not because their defense isn’t great, because there’s no mistaking an intimidating pass rush. The Chiefs barely beat the Browns because their offense is all Jamaal Charles and almost nothing else. Jason Campbell actually out-played Smith on Sunday, which means he should get every chance to be the Browns’ starter the rest of the season… until they invariably need to turn to Weeden for a game because Campbell gets hurt.

Tom Brady can only be bothered by a swollen hand for a single half…. and then things get serious. Down 17-3 at halftime, the Patriots rebounded from a terrible two quarters to force three Dolphin turnovers and find their sixth win of the season. The AFC East is still under their control until one of these lesser teams can find any consistency. (Spoiler: it probably won’t be the Dolphins.)

Buffalo actually didn’t play a terrible game offensively… but Drew Brees threw five touchdowns and the Saints didn’t turn it over once. The Bills don’t stand a chance against those kinds of numbers, I don’t care what kind of pass rush they have.

The Eagle defense gave up only five field goals… and they still couldn’t win. This marks their tenth straight home loss. I’m officially kicking them out of the playoffs. What? I know it’s only week eight, but there’s no way this team is playing in my postseason. Mike Vick heard a “pop” from his hamstring for the second time this year and Nick Foles has just returned from a concussion. Say hello to Matt Barkley and first-team reps, everyone.

Like I said, the Jags suck on any continent. They can’t even spell their own name right. Evidence below:

In non-sucky team news, the Niners are lighting people up. That’s their fifth straight game with over 30 points. And they still don’t have their receivers back yet! Yikes.

BAHAHAHAHAHA. Man, I love it when the Jets are terrible. It warms the cockles of my NFL heart. Geno Smith threw two boomerangs in this game, spotting the Bengals 14 points they didn’t even need. Andy Dalton continues to rack up the yards in his fourth straight win. He tossed for 325 yards and five touchdowns, four of which went to rookie Marvin Jones. The Bengals might be taking their “dark horse” status and turning it into “legitimate contender.”

This game started off with a bang, as Terrelle Pryor took the opening snap and ran it 93 yards for a score, the longest TD run by a quarterback in NFL history. Pryor has shown real dynamic play-making ability in his short stint as the starting quarterback. He has a mix of speed and physicality (6’4″, 233 lbs) that a lot of quarterbacks can’t match. He only threw for 88 yards, but when your team rushes for 197, it’s hard to criticize. But we can criticize Pittsburgh for sure. They ran the ball only 19 times (ridiculous) and let Roethlisberger get sacked five times. And Ben threw two interceptions, to boot.

Despite his team’s early success, the Raider defensive coordinator was surely incensed at the refs, though. Gaze upon his classiness.

Washington had a 21-7 lead in this game… and then Denver put up 38 unanswered points behind Peyton Manning while the defense rocked RG3 on what seemed like every throw. Von Miller was a presence, with a sack, a forced fumble, and another tackle-for-loss. Denver’s four turnovers didn’t seem to matter against Washington’s five, especially when Denver kept turning those into points.

At 2-5, the Falcons are falling out of contention fast. And since they didn’t trade Tony Gonzalez, they must think they still have a shot here. Just for the record: it ain’t gonna happen. The Cardinals have a better chance at the Wild Card than do the Falcons. And their starting quarterback is Carson Goddamn Palmer.

The game wasn’t even as close as the score might indicate. There was plenty of garbage time scoring for the Vikings, who didn’t threaten the Packers after the first quarter. What’s particularly astounding? The Packers didn’t fail to score on a possession until the kneel-down at the end of the game. They dominated time of possession two to one. The ratio of Minnesota’s sucky quarterbacks to Green Bay’s awesome quarterback? Three to one.

Kellen. Clemens. That’s the only reason the Rams lost a game in which they tacked up 200 rushing yards and out-gained the Seahawks 339 to 135. Their defensive line assaulted Russell Wilson all night, thanks to injuries along the Seattle offensive line. Key plays of the game? Golden Tate’s 80 yard touchdown rception (on which he was a massive tool) and the Rams fourth and one call to end the game. They passed. After 200 yards rushing, they put the ball in the hands of Clemens, who had completed only 50% of his passes and tossed two interceptions. Offensive coordinator Brian Schottenheimer should be fired.

And The Final Drive is complete! Thanks for reading everyone! I’ll be back later in the week with a preview of Thursday Night Football!