Have you figured out the 2013 version of the NFL yet? No? Good. Neither have I. But week three had its share of predictable blow-outs, but one result in particular was especially stunning. But I’m tired and really want to get through all of this and locate that mysterious sleep I keep hearing about. The Final Drive of week three starts right now!

And let’s all overreact and claim that Chip Kelly’s offense will NEVER work in the NFL! To be fair, we have no idea yet. Mike Vick is going to get crushed this season behind that offensive line. And he’s going to throw interceptions at breakneck speed. That Kelly’s offense with Vick at the helm: making mistakes as quickly as possible. Kansas City ain’t bad.

Cincy goes up 14-0, then gives up 30 straight points, then rallies to score 20 of its own to get the home win. There were EIGHT turnovers in this game, four for each team. Let’s all remember the Packers were 1-2 at this point last season as well. It’s not over yet. But Jermichael Finley going down with a concussion is going to leave Aaron Rodgers without one of his weapons.

The Cowboys might run away with their division. The NFC East is that freaking bad. St. Louis can’t be happy with their offensive line, who let Sam Bradford get sacked six times. Dallas found their long-lost running game, which is cause for celebration from Tony Romo. Here’s to not getting sacked!

This game doesn’t mean much to me other than the “fiery” Philip Rivers getting a flag for being an asshole while complaining about a call on the field. A touchdown to Eddie Royal was called back due to offensive pass interference, and then Rivers got the Unsportsmanlike Conduct call which pushed his team back a further 15 yards. Oh, and there was a crazy final play from San Diego with seven laterals and even a kick of the ball from Rivers. It was silly.

I’m not about to go overboard on the Browns. Brian Hoyer had three interceptions and had to throw it 54 TIMES. That’s just crazy. Also crazy is the report that the Browns’ receivers Josh Gordon and Greg Little are on the trading block. Cleveland’s defense showed some promise, keeping Adrian Peterson under wraps (88 yards) and sacking Christian Ponder six times. There were boos aplenty for Ponder, who despite two touchdown runs had another pedestrian day passing. He’s practically the poster child for inconsistent.

This is certainly a case of the Patriot defense being better than we thought and the Buccaneer offense being even worse than we imagined. And luckily for Patriot fans, Brady’s receivers are slowly but surely becoming more acclimated with their quarterback. Not that its perfect, mind you.

And I would be remiss if I didn’t share this little slice of Brady being angry at himself.

The 2012 Saints would have given up at least 27 points to this Cardinals team. But with the new-look Saints defense? Not a chance. But the craziest story coming out of this game is that safety Rashad Johnson LOST A PIECE OF HIS FUCKING FINGER DURING THE GAME. He hurt his hand during a play, came off to the sidelines to get checked out, and took his hand out of his glove. The tip of his left middle finger was still. in. the. glove. Here are some pictures! Thanks Deadspin! (Or really Johnson himself, who tweeted the horror.)

The Washington defense has given up more yards than any team has in their first three games in NFL history. RG3 isn’t the problem, even if he thinks rules are stupid.

OH MAN WAS THIS HILARIOUS. DID YOU SEE THAT SHIT? Eli Manning was sacked seven times and threw another interception, bringing his 2013 total to eight through three games. They had 150 yard of TOTAL offense and only had the ball for 23 minutes. The Giants may not be able to recover from this kind of beating. Give credit to Carolina for playing punishing defense and pounding this banged up Giant defensive front. DeAngelo Williams racked up 120 yards on 23 carries, while Cam Newton threw for three scores.

Baltimore’s defense and special teams won this game for them, with both a boomerang and a punt return ringing up touchdowns. The Raven offense wasn’t spectacular, especially without Ray Rice. But Houston’s offense was so ineffective that the Ravens’ woes didn’t even matter.

MIAMI. These Dolphins fought back despite the statistical whooping the Falcons were laying down on them. Atlanta controlled the clock, got five sacks on Ryan Tannehill, and even got Jason Snelling going. That’s how good they looked. But Miami was not to be denied, with Tannehill leading the fourth quarter comeback. Look out for the ‘Phins y’all.

20 penalties on the Jets stretched this game out for a WHILE. (I’m sure it was thrilling the whole time too.) The Jets had over 500 yards of total offense, but 168 yards in penalties. Eesh. Geno Smith threw for over 300 yards, getting help from receivers Santonio Holmes and Stephen Hill, both with 100 yard days. It’s a disappointing loss for the Bills, who didn’t turn the ball over and didn’t beat themselves with an abundance of violations.

Huh. Of all the possible outcomes this game could have had, this one was the least likely. The Colts overpowered the Niners, even with a lackluster debut from running back Trent Richardson. The Indy defense wrapped up Colin Kaepernick, who struggled for the second straight week. Aldon Smith played for San Fran despite his needing to head to rehab following his DUI arrest on Friday morning. Classy move, Jim Harbaugh.

I feel like the Jaguars got off easy here. Only a 28 point deficit? The Seahawks are getting soft. (I kid.) The Seahawks are going to miss left tackle Russell Okung for at least the next eight games, so they’ll continue to be wihout key players. As for Jacksonville? Their lot “improves” next week with the return of… 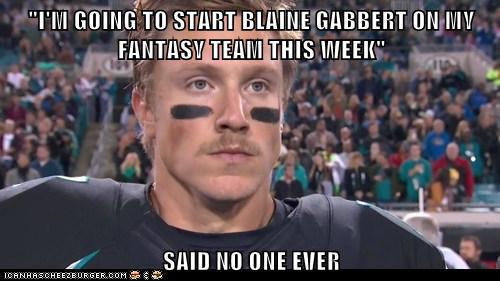 It certainly wasn’t as close as the score may suggest, but the Raiders showed a few signs of life as the game went on. Terrelle Pryor left early with a concussion after being smoked by the Bronco pass rush in the fourth quarter, which doesn’t bode well for this terrible offense. Denver might miss left tackle Ryan Clady at times this season, but hopefully Manning doesn’t take too many shots like the sack-fumble he suffered late.

And it’s done! There’s your Final Drive of week three in the NFL! Be back later in the week for another Thursday Night Preview!