The NFL regular season is ovah! That means the playoffs are just around the corner. But before that can happen, we have to run through the games that put the playoff puzzle together. It’s time for The Final Drive of week 17.

The Panthers went from 1-3 to the two seed in the NFC playoffs, an impressive feat. Their defense will be beyond formidable on their home turf., where they will now await their opponents after a bye week. It was a bittersweet exit for Tony Gonzalez, who had the fantastic one-liner that he wasn’t used to being treated “like a quarterback,” referencing all the attention he was getting on Sunday. He’s the greatest tight end to every play the game, and we’re all “pretty sure” he’s going to retire now.

So sorry Ravens. You and your overpaid, yet average quarterback and loud-mouthed linebacker will not be gracing the postseason with your presence. Cincinnati has earned the three seed in the AFC, but a four interception performance from Dalton against the Ravens has given cause for concern going into their home game against the Chargers.

The Texans now have the number one pick in the NFL Draft. That’s an awfully attractive job… but this game isn’t attractive at all. Moving on…

Even without Reggie Wayne down the stretch, the Colts have rebounded well enough to not be a total push-over when the postseason starts. That being said, I don’t know what blowing out the Jaguars should do for any team’s confidence. …’Cause the Jags suckl. Am I right?

What a waste. Miami blew a perfect opportunity to become the six seed, getting a loss from Baltimore and a win from San Diego. But then they forgot they also had to WIN THE FREAKING GAME THEY WERE PLAYING IN. GAH. Well, the Jets, on the other hand, were happy as all get-out when they were told following the game that Rex Ryan would be back as their coach next season. More on that in the Black Monday post later to come!

What did I say before this game happened? Let’s check the record books!

“Both of these teams are likely undergoing head coaching changes when Black Monday rolls around.” – The Opening Drive: Week 17, 2013

And hey, I was right! Continuing onward…

Washington managed to shit the bed one last time in 2013, this time electing to drop the trade value of Kirk Cousins by letting him throw 49 times. He had 30 incompletions, two interceptions, and one lost fumble. Well done Mike Shanahan. You deserve your $7 million next season… to not coach. Meanwhile, the Giants managed to pull close enough to .500 for Tom Coughlin to deservedly keep his job.

Wow. Pittsburgh somehow didn’t cash in all of its historic luck and legacy-related favors to sneak into the playoffs! Who would have thought it? That missed call in San Diego might have totally screwed his team, but at least Mike Tomlin wasn’t making excuses. All they had to do was not start 0-4 and they would have been playing in January. Meanwhile, Cleveland is a shit-show. They didn’t even wait until Monday to fire Rob Chudzinski, who wasn’t on the job a full calendar year.

You know the Broncos are feeling good about a lead when they put Brock Osweiler in the game. That guy doesn’t even know what standing on a field feels like. Peyton Manning, his superior, set NFL records on Sunday, adding four more touchdowns to his passing record, which now stands at 55 scores in a single season. He also snagged the passing yardage record, which seems to get broken every other year now. Still, impressive. What’s not impressive is the way Oakland face-planted this season. That team needs work.

The Patriots are the two seed in the AFC. I’m not inclined to discuss further, because beating the Bills doesn’t mean anything. …I think. Anyways, they get to relax and be healthy for a week, as do the Broncos, their main AFC competition.

The Saints are in as the six seed, which means they’ll be on the road to take on the Eagles in the Wild Card round. Brees’ four touchdowns means he’s “got his groove back,” but I don’t know if his groove travels. You follow me?

With the Saints winning, the Cardinals didn’t have a chance to make the playoffs, but that didn’t stop them from battling with a division rival. The Niners’ last second field goal meant next to nothing, but San Fran is the five seed and will travel to Green Bay in the opening round. That’ll be exciting as HELL.

The Chargers got all the breaks on Sunday, including losses from the Ravens and Dolphins, and a missed Chiefs field goal at the end of regulation. But perhaps there was no greater break than the illegal formation penalty that wasn’t called on the Chargers on that field goal attempt. 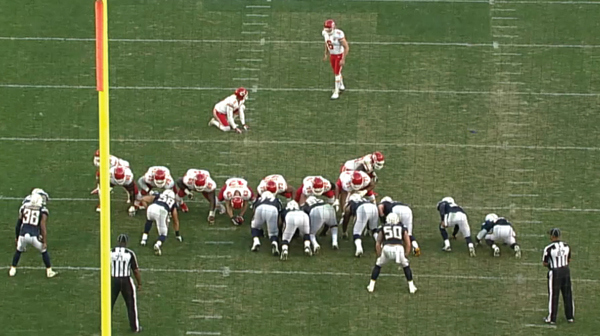 Too many dudes on the right side.

Had the refs spotted the infraction, the Chiefs would have had another chance. But they missed, and the Chargers rallied in overtime to win and claim the sixth seed in the AFC playoffs. Now we all have the pleasure of watching Philip Rivers implode in the postseason!

Seattle locked down the one seed in NFC with this win, and now they’re a clear favorite to make it to the big game, at 9-5 odds, if you’re letting Vegas be the judge of such things. The Rams had themselves a decent season, but probably don’t want to rely on Kellen Clemens for half the year again in 2014. His two interceptions didn’t exactly help against the best team in the conference.

There we go. The playoffs are all set. We’ll break down the Wild Card Round later in the week, for now, check back for my analysis of Black Monday’s endless array of coaching activity!