Oh man. Week 14’s NFL action was a beautifully written narrative illustrating the greatness of football played in the elements. If you didn’t appreciate grown men slide around in the snow, you’re a heartless bastard that doesn’t enjoy butterflies. Anyways, we’ve got a lot to talk about this week, so let’s start The Final Drive!

Oh HOUSTON. I guess being swept by the Jaguars (losing to them twice in three weeks, to be precise) and dropping eleven games straight will get you fired. And that’s exactly what happened to Gary Kubiak on Friday. A friend of mine was at this game and sent me video which perfectly captured the jeers from Jags fans directed at Schaub. It was great. But let’s be fair, the Texan job is an extremely attractive one, especially with the number one overall pick incoming. And somehow the Jaguars are on a three-game winning streak. The hell?

The Bengals unleashed the “Red Rifle” (I like to call him the “Red Rocket”) Andy Dalton on the Colts, who couldn’t stop Cincy’s offense from doing ANYTHING. Andrew Luck tossed four touchdowns, but the Colts only ran the ball 12 times for 63 yards. Their defense was on the field way too much. They’re a one-and-done team when the playoffs roll around. (And now I can say that, because they’re the first squad to clinch their division.)

Without Aaron Rodgers, the Green Bay Packers got a much-needed win on the frozen dirt of Lambeau Field. The status of Rodgers is still unknown, but at least they still have a chance at the postseason. They’ll need to win out and get a loss from Detroit, which could totally happen because A- Detroit and B-Rodgers might come back with a vengeance.

As my friends and I (one of which is a Browns fan) was monitoring this game, we realized the Browns were up 12 points with just over two minutes left. There was a high five… and that’s when everything went to shit. A highly questionable pass interference call put the football at the one yard line, where the Patriot scored their second touchdown in 30 seconds. Now they’re in line for the AFC’s number two seed. Bad news couldn’t help but seep into this comeback win as we found out that Rob Gronkowski tore his ACL and MCL, and also suffered a concussion on a low hit in the third quarter. I’m just not sure what defenders can do anymore to avoid hurting ball-carriers… oh wait, I know. HIT THEM IN THE MIDDLE OF THE BODY.

This is me not giving a shit.

What a fantastic SNOW BOWL! Players were ankle-deep in snow when they hit the endzone, and that just looked FUN. As far as the game itself goes, the Lions were unable to cope with all that precipitation. I mean, they did fumble it seven times. The Lions are still atop the NFC North and the Eagles are in sole possession of first place after the Cowboys lost on Monday night. 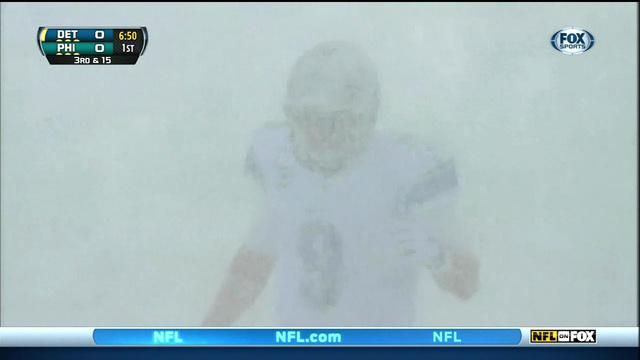 This is an actual picture.

What was nearly a miraculous win by the Steelers turned into an agonizing defeat when Antonio Brown stepped out of bounds on this play in the final seconds. Now the Steelers are surely out of the playoffs and on their way to a tulmultuous offseason. Meanwhile, the Dolphins have seemingly recovered from their locker room disaster and are in the hunt. (Sorta.)

That’s it. We’re getting more Schiano next season. This stomping of the Bills all but confirms it. I can only hope that they’re just as dysfunctional next year. With my luck, they’ll go 11-5.

Overshadowing the streak-snapping win by the Chiefs were the crazy reports that Mike Shanahan nearly quit last offseason because of the special treatment owner Dan Snyder gives RG3. First of all, this is the NFL. Every quarterback gets preferential treatment, and not just from the owners. Second, it’s clear the leak came from Shanahan’s camp, who is probably looking to get out of this contract when the season is over, if not sooner. This marriage has to end.

This game was crazeballs. It featured six leads changes in the fourth quarter (42 points in all during the frame), a load of snow, and two touchdowns in the last 45 seconds. The biggest news to come out of this game is the injury to Adrian Peterson. He doesn’t have a Lisfranc fracture (only a sprained foot), but his status for the Vikes’ next game is questionable. But does it really matter? They’re out of the playoff race and have nothing to play for. In fact, they’re playing their way out of a better draft pick. The Ravens won and are now slotted as the six seed in the AFC playoff race! So uh… slow clap for Joe Flacco.

Look, the Manning in cold weather statistic is nice to bring up, but he played in a dome for so long that it’s only natural that he’d have a worse record in elements. Hopefully this 51 point bonanza will quiet a few critics… for the next five minutes. Manning is at 45 touchdowns with three games to go, so he’s well within striking distance of Tom Brady’s record of 50 passing TD’s in a season. Speaking of records, we had a 64-yard field goal, the longest in NFL history! Woo. Another notable injury from the week is Wes Welker, who left this game with a concussion. At some point, enough has to be enough, right?

With this loss, the Rams are officially out of the postseason race. But the Cardinals are still in the hunt, sitting just outside of the final wildcard slot. That Arizona defense really stepped up, corralling Tavon Austin and holding the Rams to just 100 yards rushing. If Carson Palmer can just avoid turnovers like he did in this game, his team has a chance.

And there was a hand-stomping. So that’s cool.

Okay, so there were only three combined quarterback turnovers in this game. So if you took the under in my prediction, you won. And the Giants’ Andre Brown still fumbles. I’m honestly disinterested in this game otherwise.

Like I semi-predicted, this was a respectable loss for the Seahawks. It took a late field goal drive from a desperate home team and division rival for Seattle to lose. They’re still the number one seed in the NFC and they know they can dominate the Niners at home. San Francisco needs to continue getting Frank Gore more involved in the offense as the playoffs near, because I just don’t trust that passing attack yet.

After an appalling showing versus the Seahawks, it would have been extremely easy for the Saints to come out flat against their division rival. But they put their stamp on the NFC South by dominating the Panthers defensively. It wasn’t even because of turnovers either. Carolina only had 239 yards of offense, a great showing from Rob Ryan’s unit. (Giggle.) For now, they control the NFC South. Until they play each other again in two weeks, when it could be a very different outcome.

And now I’m done. I have a bed to crash in. Enjoy your week and stay warm!