Week one in the NFL is a wrap! The upsets were plenty, the offenses were fast, and the safeties were in vogue. It’s time to start The Final Drive!

Peyton Manning: Crusher of Dreams, Destroyer of Worlds. The first half was extremely close, with both teams struggling to get pressure on the opposing QB’s. And then Manning came out in the second half and remembered the Raven secondary was vulnerable for an ass-kicking. The Broncos’ inability to run the ball made the fourth quarter more interesting than it needed to be, but they came out on top. The Ravens aren’t done by any means though. That defense will look better as the year draws on.

Side note: Terrell Suggs has replaced Ray Lewis as the Ravens’ “Linebacker Whose Loud-Mouthed Rants Incessantly Irritate Me.” 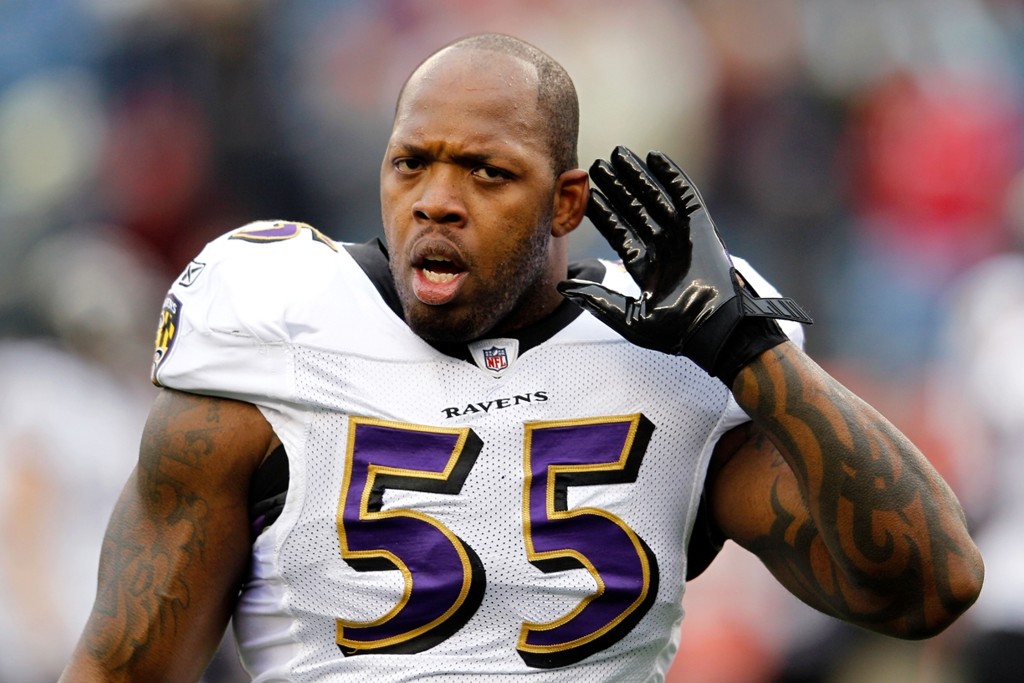 One more note from Thursday night: this cheerleader was not filmed at the proper angle. NBC, you’re ridiculous. 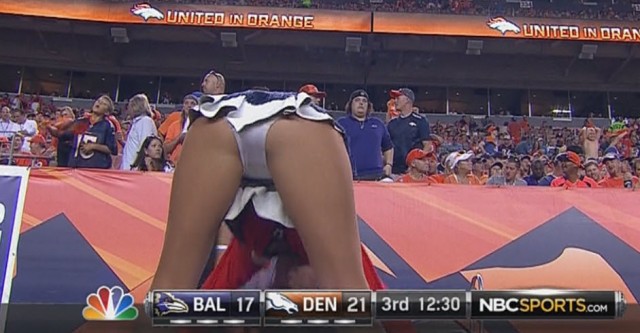 I know I ask for more cheerleader shots… but REALLY? THIS?

The Patriots squeezed out a shitty win, sure. You’d like to think that their young receivers will catch on (pun slightly intended), but Zach Sudfeld’s hamstring injury and Shane Vereen’s broken wrist will set the Patriot offense back even further. They need Gronk, now. But Danny Amendola proved to be a great Welker-clone… when he wasn’t on the sidelines.

Brandon Weeden threw three interceptions and completely undid the positive reactions surrounding his preseason. Tight end Jordan Cameron really came on with nine catches, 108 yards, and a TD, but there wasn’t a lot else to like from Cleveland’s offense. Miami pulled off the tough road win, but still had to deal with a bitchy Mike Wallace, who wasn’t happy with his usage, or lack thereof.

As many mistakes as the Lions made, you have to give them credit for their run defense against Adrian Peterson. After he rumbled for a 78-yard score on his very first carry, the Lions shut him down. They only allowed AP 15 more yards for the rest of the game. That’s the right formula. But Suh still needs to at least be fined for this unnecessary low-block on John Sullivan. Respect your fellow players, brah!

*Slow Clap* Well done Oakland. Congratulations on not looking utterly hopeless in your season opener. As of Sunday night QB Terrelle Pryor led the league in rushing, so ya know… that’s something! Pryor gives the Raiders explosiveness, something they’re sorely lacking. Now that they’ve put Pryor on film, expect defenses to figure him out quick.

Uh… that’s a New Orleans Saints defense. Giving up only 17 points to the Falcons? (10 of which came in the first quarter.) That’s a feat to be proud of. If this defense can hold teams below 21-24 points a game, Brees shouldn’t have any trouble leading them to a division title.

The Jets had no business winning this game… problem is, the Bucs clearly didn’t deserve to win either. Buc linebacker LaVonte David’s late hit penalty gave the Jets a shot at a make-able 48 yard field goal. This after Josh Freeman actually managed to drive the Bucs to a field goal with 34 seconds left in the game. The Jets are 1-0, but it’s a shaky record at best.

And this is the kind of stinker I thought the Steelers could put up. Until very late in the fourth, the only points Pittsburgh had on the board were the two that resulted from the opening kickoff, where the Titan return man did this:

Other than that amazing piece of idiocy, the Steeler offense was useless. They lost center Maurkice Pouncey for the year, a crippling blow to an already suspect offensive line.

Carolina’s front seven is LEGIT, YO. Seattle had trouble running the ball against the Panthers, forcing Russell Wilson to simply bide his time until his touchdown throw to Jermaine Kearse in the fourth quarter. This was a great, but tough road win for the ‘Hawks, who welcome in the Niners for week two.

Jacksonville might be worse than even I thought they were. That’s impressive. Oh, and Chad Henne will start for them next week. Have fun with that.

A highly competitive battle…that I barely watched… between two teams that will be at the bottom of the division.

SO MUCH HAPPENED. Colin Kaepernick provided ample evidence that he is a QUARTERBACK, not just a “running quarterback.” Throwing for 412 yards with that kind of accuracy says as much. Clay Matthews sky-clotheslining Kap out of bounds started a clusterfuck of an officiating nature. But at the end of the day, the Niners deserved to win. (But the Packers really made a game of it on the road.) 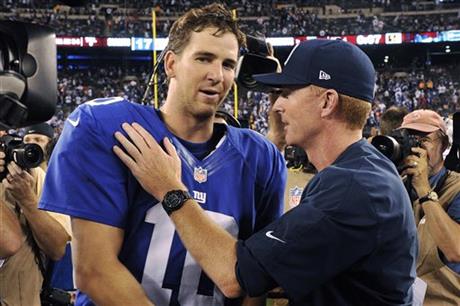 “Thanks for sucking out there. Tony really appreciates it,”

It took a long time for either of these teams to act like they wanted to win. The Giants committed three turnovers in the first six minutes of the game, but the Cowboys took their sweet time in capitalizing. Eli Manning was plenty distraught and Tony Romo got sandwiched. It was fun times for all. I still don’t think either of these squads are very good. Dallas has Monte Kiffin preaching turnovers, so maybe the Rob Ryan stank is off that defense.

Non-football note, I’m still formulating a reaction to Carrie Underwood’s rendition of “Waiting All Day for Sunday Night.” As some of you may know, I had a love for Faith Hill. And her legs.

RG3 took a tad too much time working himself into a rhythm. By the time he settled in and stopped compensating for his repaired leg, the Eagles’ fast-paced offense had already built a sizable lead. Washington’s defense had no answer for LeSean McCoy, who carried the ball 31 times for 184 yards and a Tee Diddy. (I’m going to use that. It’s mine.)

Same old Chargers, same old implosions. The Texans scored 24 points to close out this game and recover from an early Charger assault. Houston’s defense really clamped down on Philip Rivers, who does deserve to be punched in the junk. “Fiery competitor” my ass.

Now, it’s important to remember that week one is full of oddities and upsets, so let’s not consider anything we saw a real indication of how the rest of the season will go. We’re going to really figure these teams out in the next few weeks. Now get out of here! Joey’s gotta take a nap.