Welcome to Surfing the Network! This ongoing series (with a title I still don’t like) will delve into the deep recesses of the WWE Network’s offerings and give a current take on the matches/PPV’s of years past.

Today we’re looking back at the match between Outsiders Kevin Nash and Scott Hall and Sting, Lex Luger, and Randy Savage which took place at WCW’s Bash at the Beach back in 1996. This is where Hulk Hogan made his now-legendary heel turn. We also call it the day the music died. (Not really.) When it comes to classic wrestling, the moments are clearly better than the matches, and this is no exception. This match just turned 19 years old on Tuesday, so I figured it was a perfect candidate for Surfing the Network.

The story here is a fairly simple one by today’s standards, Hall and Nash were the new guys on the block, fresh on the streets of WCW after leaving a rival company. They were the interlopers, the “Outsiders.” And being the fresh faces, Hall and Nash wanted to take over. The difference in this case? It’s mostly true. Hall and Nash had recently left WWF, and basically appeared on WCW Monday Nitro the following week. They were the new guard and were getting all the attention instead of the company’s long time mainstays. The match at Bash at the Beach featured Hall, Nash, and a third unnamed partner against the team of Lex Luger, Sting, and Randy Savage. This was the “hostile takeover” match, where the winning team would reign supreme or something. I don’t know what it means, its wrestling. Does it matter?

Now, I was always a WWE/F fan growing up, so I saw very little of WCW’s programming. I’m seeing almost all of these matches in their entirety for the first time. So, let’s talk about this “six man” tag team match.

– I’m just minutes into this, and you know what I REALLY love about this? Five dudes get introduced (the mystery 3rd partner doesn’t come out), and there are only two entrances. You know how WWE would run this. Nash and Hall would get their own entrance, but we’d go through three individual ten minute walk-down’s for the other three guys. Already they’re saving me time and I LOVE IT.

-Actually, Gene Okerlund had to come out and ask Hall and Nash why the third guy isn’t out there. That sorta ruined my time saving.

-We’ve got a strong commentary team of Bobby Heenan and Dusty Rhodes as the color men, along with Tony “Holy Mullett” Schiavone. 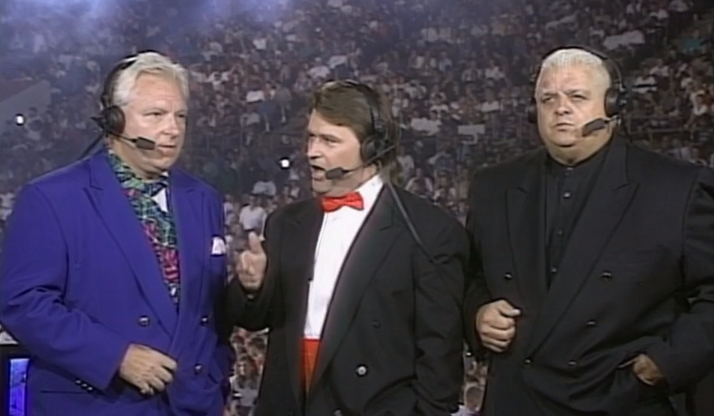 Very Business in the Front.

-Lex Luger basically takes a nap after about 35 seconds worth of work thanks to the Stinger Splash, resulting in his being wheeled out on a stretcher. Without much build-up, it’s a 2-on-2 match already.

-Lots of rough spots, as with most “wrasslin” from back in the day. A lot of elbows and kicks and punches and little else. Ya know, not pretty wrestling.

-The match itself is mostly a snooze-fest, with Hall and Nash trying to isolate Savage, then Sting, then Savage again. The announce team, in pure homer fashion, rooting HARD for the company men.

-The Hulkster swerve happens when he comes out and drops the leg on Randy Savage, his longtime running buddy. It gets plenty of heat, with fans throwing refuse into the ring. You don’t see that anymore, but back then fans were less civilized and more rednecky. Especially for WCW. 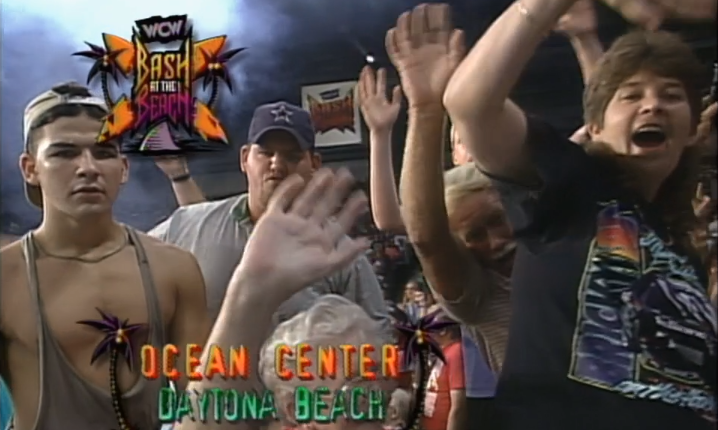 -The announce team does a piss-poor job of selling the surprise, with Heenan immediately question Hogan’s loyalties as soon as he hits the stage. Then their outrage lasts for all of five seconds, when there it turns into abject fucking despair.

-Gene Okerlund returns to the scene for a post-match interview with the Hulkster, who blusters his way through several “let me tell you something” and “the thing you gotta know/realize is” statements before talking about how he got everyone at then-WWF rich or something. As far as promos go, it’s middling to fair. He’s got that one Hogan-timbre to his voice and is constantly holding Okerlund’s arm to his face, as if the microphone isn’t a separate entity he can just remove. Okerlund does his best curmudgeon impression, as he lectures Hogan on his choice of running buddies.

The broadcast basically ends with Schiavone very matter of factly telling Hogan to go to hell. Sure, if that’s how you’re ending a show. Go for it.

All in all, it’s about 35 minutes from the entrances to the end, so if you got some time over a lunch, give it a watch. It’s a historic moment in wrestling, but the match itself does leave a lot to be desired. WWE did this a few times later, with the WCW/ECW Invasion storyline in 2001, which had better matches in my opinion. (Survivor Series 2001 is a fun match, even if the outcome is never in question.)

That’s all I’ve got for you today! Hope you enjoyed this random look in the vault of the WWE Network. Let me know if there’s something you’d like me to watch and cover for ya!