In our first preview of Sunday’s Super Bowl, I took an in-depth look at the Denver Broncos. Now it’s time to examine their opponent, the Seahawks of Seattle. (That just rolls off the rongue nicely.) After nearly rallying in the Divisional Round last year only to lose on a last second field goal, the Seahawks rebounded in 2013 to dominate the NFC, going 13-3 during the regular season). Before their final game of the year, let’s get all up-close and personal with the roster of the NFC Champion Seattle Seahawks.

Russell Wilson is the curly-haired quarterback that never seems to be rattled or fails to be all leadery and stuff. At the end of only his second year in the NFL, Wilson is mentioned in the same breaths as Luck, RG3, and Kaepernick when “the next great quarterbacks” are discussed. Wilson excels at deep-ball play-action (I said it) and extending the play with his legs, even during a season when the Seahawks used less of the read-option plays in their arsenal. Sometimes Wilson’s short-throw accuracy struggles, but that’s also a sign of his receivers not getting decent separation and his avoiding the big turnover. He got jacked up this year, thanks to fluctuations along the offensive line.

Left tackle Russell Okung is the anchor of the Seahawks offensive line, but only appeared in eight games this season because of a torn ligament in his toe. (I’d probably never walk again. This guy’s playing left tackle.) He solidified the line upon his return, but this unit isn’t as skilled in pass protection as Carroll would prefer. Guards James Carpenter and J.R. Sweezy are better at opening up running lanes in the middle of the line and right tackle Brian Giacomini is similarly aggressive. I can’t say anything about center Max Unger. How can we tell when centers don’t suck? I DON’T KNOW. Let’s get to players I can actually analyze.

Marshawn Lynch is the man of few words and impressive stiff-arms. Seriously, the dude will put you on your face.

The running back has gotten an absurd amount of coverage this week because of his less than enthusiastic nature when it comes to interviews. He’s short-changed the media for years, and now that he’s under the SB spotlight the writers want to take offense. It’s pretty much ridiculous to me, so we’re moving on. In a league that’s heavily trending towards multiple running back usage, the Seahawks don’t deviate from Lynch often, occasionally bringing in Robert Turbin as a change-of-pace back. But Turbin barely sees the field as the game draws on, which is when Lynch is at his best.

At first glance, Seattle’s receivers aren’t eye-popping, especially since Percy Harvin’s been on the shelf for so long with a hip injury (and in the postseason, concussion troubles). Harvin’s return means Wilson has one of those “dynamic playmakers” we hear so much about, albeit one that can;t stay on the field. Harvin needs to get the ball in space off reverses or receiver screens in order to maximize his potential on offense. Doug Baldwin and Golden Tate are deep threat specialists, something the Seattle offense needs as those big plays keep defenses from stacking up against the run.

Wilson only has one tight of note, and that’s Zach Miller. Miller actually pulled a reverse Raider. Normally players go to Oakland and start sucking. Instead, Miller made a name for himself as a decent receiver as a Raider before signing with the Seahawks in 2011 and stinking up the joint. He caught 50+ passes three out of his four years in Oakland. He hasn’t done that once in his three seasons in Seattle despite staying relatively healthy.

Seattle cast a wide net in free agency this past offseason, signing a number of free agent defensive linemen for less than what was initially projected would be the price. Defensive ends Michael Bennett and Cliff Avril were respected pass rushers on their prior teams, coming over for short-term deals. That risk proved rewarding, as they came up with 8.5 and 8 sacks respectively this season in a jam-packed d-line rotation. That certainly off-set any pressure the ‘Hawks would have missed by Chris Clemons’ erratic absences. At defensive tackle, Brandon Mebane is a large, excitable dude.

The Seahawk linebackers are the weak link on a very talented defense, which is why they drop so dramatically from 1st in pass defense to a LOWLY SEVENTH in rush defense. THE SHAME. Middle linebacker Bobby Wagner missed a few games but still lead the team in tackles and garnered five sacks, six pass deflections, and two interceptions. Bruce Irvin was a first round pick and expected to be a force off the edge of the line. He’s been slid back to the weak side ‘backer spot, making better use of his smaller frame. Malcolm Smith is dependable on the strong side, with a boomerang (INT returned for TD) during the season and the game-sealing interception off Sherman’s tip in the NFC title game.

As much as there is to say about Wilson, Lynch, and Harvin, the Seattle Seahawks are known for their intimidatingly sizeable secondary, also known as the “Legion of Boom.” (For those non-wordly readers, this moniker is taken from the WWF’s “Legion of Doom,” made popular in the 80’s and early 90’s of professional wrestling.”) This unit is largely responsible for the Seahawks holding opponents to the lowest point average in 2013. 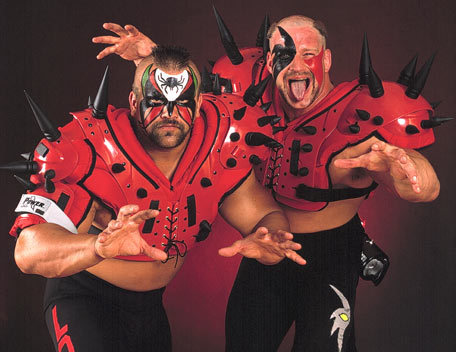 Hawk and Animal. The LOD.

At the forefront of this celebrated secondary is Richard Sherman, the self-proclaimed “best corner in the NFL.” I can’t argue much with that statement. Sherman has amazing ball skills and the most interceptions (20) and passes deflected (61) in the league over the past three seasons, which is how long he’s been in the NFL. Coincidence? Yeah no. Seattle’s actually been missing second corner Brandon Browner for some time, due to a year-long ban for a third positive test for illegal substances (marijuana). Even without him, the Seattle secondary hasn’t missed a beat, controlling their two postseason games and shutting down quarterbacks Drew Brees and Colin Kaepernick. I’ve felt that while Browner fits Seattle’s scheme very well, he’s not an elite corner. He’d be a solid number two on another squad, but I don’t see number one skills. The unit’s performance without him serves to back that sentiment up.

Not only does Seattle have an elite corner, but their safety tandem is the best in football. Earl Thomas and Kam Chancellor are ball-hawks of the highest degree, always tracking the downfield receiver. They can each lay the wood if necessary as well, meaning they can come down in run support if necessary. Pete Carroll doesn’t put a lot of stress on his corners, electing to play a lot of three deep coverage to give them help over the top. But they are routinely put into press situations (jamming receivers at the line of scrimmage), where their size and physical nature gives them the best opportunity to succeed. Thomas and Chancellor are ranked second and third in tackles for Seattle, so you know they’re worthy of their LOB hashtag.

Show me a team that focuses on defense and ball control offense to win its games and I’ll show you a team that relies on their special teams to establish field position and secure valuable points. If you didn’t read about it, placekicker Steven Hauschka is known for the kick he didn’t attempt, telling Pete Carroll that his 53-yard try versus San Fran wasn’t a good idea. That led to the Wilson free-play touchdown, so let’s all applaud a kicker for surprising us by not being a total prick and thinking he can boot it from anywhere at anytime.

They’ve got some punter named Jon Ryan (a name which sounds totally made up), who seems generally mediocre when you look up all the punting stats… which I, as a freak, did ON YOUR BEHALF. And you know what I saw? That Ryan’s 74 punts had an average return of 3.9 yards, which is second lowest in the league. That’s legitimately impressive. And now I’ve spent an entire paragraph on a punter. You’re welcome.

While Doug Baldwin has been filling in admirably in the return game (certainly made himself known against the Niners) Percy Harvin has the biggest impact on special teams. He’s electric as a returner, so since he’s healthy again (for now), look for him to be deep on punts and kicks during the course of the big game.

Pete Carroll is a ra-ra guy from the college ranks (following a “failed” stint as the Patriots head coach) who lets his players swag like no one else. He encourages their unique personalities and their rampant PED use, apparently. His coordinators are Dan Quinn and Darrell Bevell (defense, offense), both of whom have been under constant consideration for head-coaching gigs. Notable is offensive line coach Tom Cable, whom Marshawn Lynch likes because he punched a dude once.

Okay, now I’m exhausted. Check back soon for the Prop Bets of Super Bowl XLVIII as well as the long-awaited SB edition of The Opening Drive!