It’s a hot topic in today’s ever-evolving video game landscape. To pre-order or not to pre-order? Times have changed since putting down $5 secured you a copy of that one special game you thought would be hard to get on day one. Now the environment is littered with exclusive bonus deals and fancy-as-hell collector’s editions that necessitate making decisions earlier than ever. However, those “perks” have been negated by games shipping incomplete, needing massive patches, or being entirely god-awful money pits with season passes or micro-transactions draining your e-wallet. Even worse, review embargoes utterly prevent consumers from learning about a game’s quality until literally 12:01AM on the day it releases. So how do you know when it’s okay to plop down $120 on that collector’s edition with the steelbook case, statue, keychain, and extra story content? And how do you know to do it in advance??? Well, as someone who buys a ton of those loaded editions, let me try and guide you through the depths of video game treachery and assumptions.

Let me just run you through a sampling of the video game collector’s editions I have purchased in my time, complete with linked pictures. If there was a fancy version of these games, I bought it.

Injustice: Gods Among Us (PS3)

And just for kicks, here are my two pre-orders on the horizon (one very soon):

Okay, now that you’ve seen the list (which is not totally complete, mind you), you can see I am somewhat qualified to say whether ordering those special editions was worth my money or not. Because I did quite honestly, spend a shit-ton of money on those. The most expensive was the Inquisitor’s edition of DA: Inquisition, which retailed for $169.99, which I had no qualms spending. I love everything Dragon Age and will support it until I inexplicably become bored with swords and dragons wrapped in adult fantasy.

How did I buy all these special editions? Well, I pre-ordered, duh. Only ONE game on the above list was bought on a secondary market, and that’s because I didn’t jump on that Mass Effect 3 pre-order when I should have. If you’re trying to get one of these a week before the game comes out, good luck. So, how DO you make a choice to buy a game six months in advance? I can help.

Why should I pre-order?

Ask yourself these questions.

Do I REALLY want this game on day one?

Am I fan of this series/franchise? (If applicable.)

Do I trust the publisher and their track record with prior games?

Does it come with special content or physical stuff that makes it worth it to me, personally?

If you pay attention to that list of games above, there are very few initial IP’s found on it. Most of those games were the latest in a series in which I already had a vested interest. Otherwise they were games like Injustice, a fighting game featuring the superheroes I know and love that came from the publisher of what I consider THE fighting game of my gaming career. (Mortal Kombat, FYI.) All that said, these collector’s editions were limited runs and in probably every case sold out before the game’s release day. In the world of video games, some of these franchises are heavy-hitters. That being said, physical memorabilia/merchandise for some of these titles were and still are limited. It’s not like I can go to Target and pick up a Dragon Age cloth map. So I want to support these franchises and put my money towards them in the hopes that I contribute to more awesomeness down the road. If you love a studio’s creations, you’re more than entitled to back their new project without having a hands-on experience. Bioware, Bethesda, and Rocksteady are among the studios that have gained my trust and support.

Why shouldn’t I pre-order?

If you’re just ordering the vanilla copy of the game, do yourself a favor and just wait until the reviews are online to find out if the game is terribly shitty or not. I almost pre-ordered the collector’s edition of Aliens: Colonial Marines, before I asked myself the questions on that list above. And I dodged a wicked bullet. (Note, I later was bought the CE as a gift, but that was a significant time later and it was at a deep discount by then.) As another example, I skipped on Batman: Arkham Origins, as it wasn’t Rocksteady behind the wheel. That game is universally recognized as below par for the Arkham course, so I was vindicated in my skepticism. Don’t pre-order if there’s a legitimate concern that something about this game/edition is going to be such a waste of money that you’re going to regret it. But don’t worry, I’ve got a section for that too…

I’ve pre-ordered already, but I’m afraid I’ll regret that decision. What do I do?

Don’t worry, you’ve got options! First off, you can just cancel the order. Seriously. If it ain’t shipped, you don’t have to pay for it. Second, you can find somebody else to pay for it! You can work that angle in a few different ways. You can slap a pre-sale on eBay before the game even ships. That’s actually the best way to go. After the edition sells out online through normal retailers, people jump to the secondary market to get their hands on one before it’s too late. So go ahead and mark up that CODBLOPS2 fancy edition with the drone copter and see what happens! (Seriously, it was a thing.) You could actually MAKE money off your stupid pre-order decision! Or you could sell bits and pieces of its special-ness. I did that with WWE 2K15, a game which I was having second thoughts about as it was releasing. It came with this nWo Hulk Hogan Funko Pop doll that I in NO WAY wanted to display anywhere. So I sold it on eBay for $35, which almost entirely offset the $100 edition’s mark-up over the regular copy of the game. The purchase was much more palatable at that normal price tag. Or sell the game and keep all the little fancy extras! You may still like the franchise, but maybe that particular game sucks. Sell it and maybe grab it again later when it’s on sale if you still wanted to play it.

Okay, I’ve pre-ordered and I feel great about it. Anything else I should know?

It still might be a crap-shoot. There’s always those sequels that come out and fall dramatically short of their predecessors. The Assassin’s Creed series come to mind. Black Flag is enjoyable as hell for me, but that doesn’t mean I was going to put money down early for Unity, which ended up being a buggy mess. Know that buying ANYTHING in life is somewhat of a risk. Yes, you have a certain level of comfort in buying bread from the grocery store, but that doesn’t mean you won’t hear about a BREAD RECALL a few days later because flesh-eating bacteria made its way into Fluffy McBreadykin’s Manufacturing Plant. But video games are trending in the wrong direction when it comes to shipping finished products. 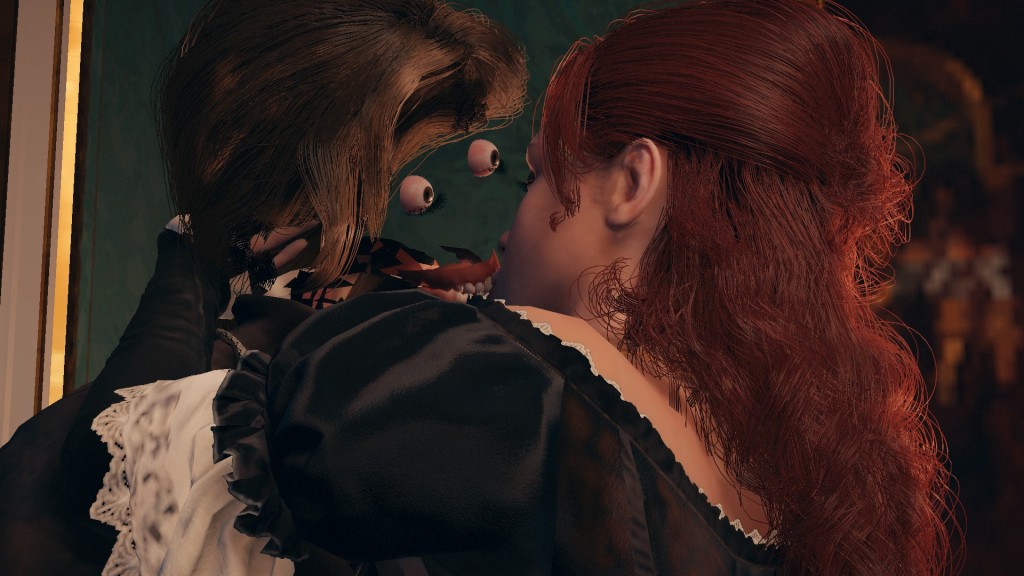 OH GOD WHY WOULD YOU KISS THAT

That’s not the only craptastic result you can have though, as we just recently learned from the release of Batman: Arkham Knight. Their massive (and expensive) Batmobile Edition was just up and canceled mere days from release due to issues at the manufacturer. So everyone who ordered a $200 version of this game are left high and dry without a viable back-up plan. That’s the first time I’ve even heard of something like that happening. I’ve seen some gamers comment online that they pre-order two copies, each one from a different retailer, just to make sure they nab their geeky prize. I don’t prefer that practice since it takes away a special edition from someone who might want it, but whatever you gotta do I suppose.

At the end of the day, it’s your effing money. Don’t let other people make you feel bad if you really want a game and are willing to bet your hard earned dollars on it not being a pile of suck. Yes, there’s an inherent danger in “pre-funding” games, but you have to examine the actual culprits and not just declare the gaming industry guilty by association. If you trust Bethesda, then feel free to give them your money. Just don’t keep pumping money into a crappy publisher’s coffers. That’s unforgivable and you owe it to other gamers to speak with your money and hold off until you know that shady company has learned the error of their ways.

The lesson has ended and I have games to play. Go now and blow money in what way seems best to you.