With the NFL regular season fast approaching and teams trying to finalize rosters while replacing injured stars, notable stories are to be expected. Normally I’d write up a post when an individual news story pops up worth writing about. But today? Man, the headlines are coming down the pipe faster than I can flush them. (I’m certain that’s how that phrase is to be used.) Let’s round through some NFL happenings!

These spectacles we shall miss.

We’ve known Miller was being suspended under the league’s substance abuse policy for some time now, but the actual length of the suspension was yet to be determined. Schefty and Mort over at ESPN reported earlier today that he’s likely to be out for six games. While this seems like a MAJOR blow to a title contender, let’s look at the games he’ll miss.

I figure at worst they go 3-3. Oakland and Jacksonville are near locks for a win, and they win one of the Philly/Cowboy games. Are they beating the Ravens on opening night? Maybe not. But Manning will put up points regardless of Miller’s presence. They can win a shoot-out against anybody. Their defense will surely suffer against quality quarterback play, but this isn’t the end of the world.

Just looking at this trade makes me ill. Baldwin is a “potential” receiver who has all the talent… but shitty hands. Dude drops a lot of balls, yo. Jenkins is a more recent selection, but one that the Niners clearly feel can’t help their roster, even with an injury to Michael Crabtree. Both teams are banking on the “change of scenery” sports theory that their new weapons will be of use.

Blaine Gabbert Will Start for Jaguars in Week One

Ah. We finally know that Gabbert will start instead of Chad Henne. That’s a relief. After an ugly preseason for Henne, I was trying to figure out how all of his fervent supporters would justify his getting the nod in their opener. Gabbert has a high(er) ceiling, but the Jaguars desperately need to know what they have in him. It’s certainly his last year to make his mark in Jacksonville. 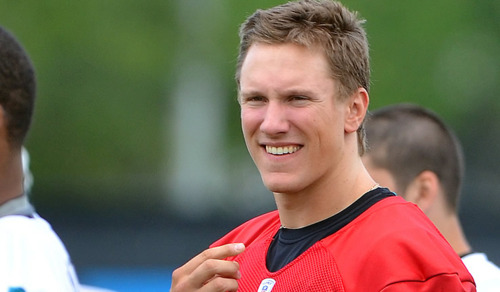 Blaine. I miss the long hair.

I’ll be back soon to cover more NFL news and to make my season predictions! (If they don’t run me into the ground first.) Stay tuned!