The first round of the NFL Draft was filled with shenanigans and drama, as usual. And the overnight ratings confirmed this, as the NFL Draft just TROUNCED the multiple NBA and NHL playoff games that aired last night. Seriously. Live sports with TITLE IMPLICATIONS lost out to a ginger reading names at a podium and kids strutting up to the stage while analysts crap themselves with surprise.

…God I love the Draft.

So, let’s get into the my notes from last night’s event and have a wee preview of what’s to come tonight.

-Usually I panic over which network’s coverage I’ll stick with throughout the draft. Thursday night? It was no contest. Ray Lewis was on the set for ESPN, along with the non-stop shitty improviser Chris Berman. There was no way I was watching that pair of ass-clowns for four hours. Hello NFL Network!

-The first two picks were sans drama with Jadeveon Clowney and Greg Robinson falling one-two to the Texans and Rams. Clowney can wreak havoc in that Texan front seven and Robinson will be a dominant force in the running game on day one for the Rams. But this was as the draft was meant to go. It was at pick number three that Jacksonville tossed out the first curve-ball by taking quarterback Blake Bortles. They apparently had their eyes on the Central Florida QB for some time and hadn’t let anyone know about it. Well done them. Bortles is apparently someone they’d prefer to let sit for 2014, so he can learn behind the greatness that is Chad Henne. (Better than sitting behind Blaine Gabbert for a season going “What the hell? I don’t suck as bad as THAT guy!”) 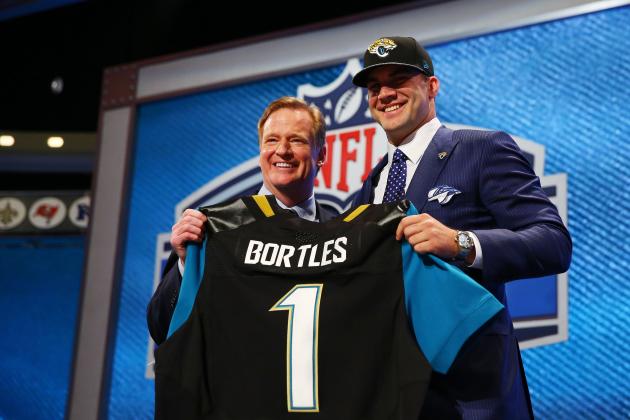 -The Browns were active as hell. They traded out of pick number four, striking a deal with the Buffalo Bills. The Bills came up to take receiver Sammy Watkins (more on that later). Along with their 2014 1st, Buffalo gave up their 1st and 4th round picks in 2015 to move up and take Watkins. That might sound like a lot, but for 2014? All the Browns did was swap down picks. There’s a lack of immediate impact for this trade on the Browns’ side.

-The Browns were at nine when they traded up one spot with Minnesota to snag corner Justin Gilbert. Mike Pettine is stressing that his defense gets even better than they were in 2013, and putting Gilbert opposite Joe Haden is awfully aggressive. It’s lock-down time in Cleveland.

-The story after the first few picks became “What team will take Johnny Football?” I’m pretty sure the world was all ready to explode as the Cowboys were on the clock at pick sixteen, but they took a fucking offensive tackle instead. That’s such a tease from Jerry Jones.

-And now let’s just talk about it. The Browns traded back up in the first round from 26 to 22, right before the Chiefs at 23, who were floated as a possible landing spot for Manziel given that contract talks with Alex Smith haven’t been smooth. The Browns then took Manziel, who looked relieved that his night of waiting was finally over. Manziel joins a roster without an established starter, despite the odd love for Brian Hoyer. He’ll eventually get every chance to start, but he’ll have to beat Hoyer in training camp/preseason straight-up if he’s gonna be the man on day one.

***He might be without receiver Josh Gordon for an extended amount of time thanks to another positive marijuana test. You should probably put those Manziel Pro Bowl ballots away now… 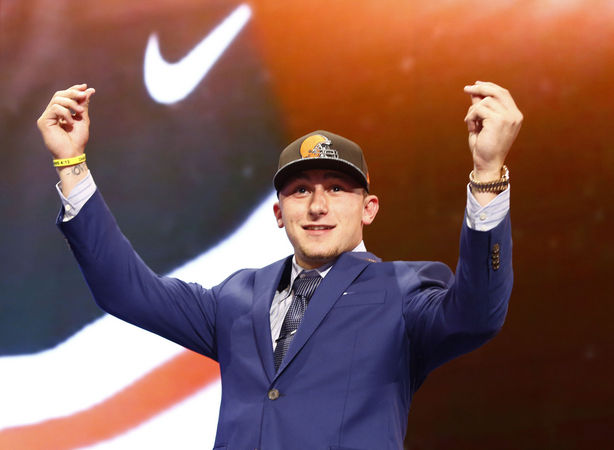 -Let’s get back to the Bills for a second. Instead of drafting Watkins and having Stevie Johnson on the opposite side, they have now apparently traded Johnson to the 49ers, who were in the market for a new receiver. So it’s an upgrade for second year quarterback E.J. Manuel, but not as much as it could have been

-Oakland managed to not shit its own bed for the umpteenth year in a row, taking the safe pick in Kahlil Mack. Let’s all congratulate Mack for his 3.4 years in the NFL now, because that’s pretty much the lifespan of a Raider first rounder.

-So I barely heard any draftee’s walk-up music. What a freaking waste of time that was. FIX THEM SOUND CONNECTIONS, YO.

-Sticking to their plan, the Bucs took receiver Mike Evans. Evans is a big bodied receiver with a wide catching radius, so pairing him with Vincent Jackson means Josh McCown has the same sized weapons as he did in Chicago. Smart move Lovie.

-The Vikings took outside linebacker Anthony Barr at pick nine, which was a bit early for my taste. I’d have preferred Barr later in the teens, but what do I know.

-Stunningly, the Detroit Lions took tight end Eric Ebron, continuing their offensive stockpile of weapons. I don’t hate it from a pure football standpoint, but from a total roster perspective? Please. The Lions seem utterly willing to ignore their god-awful secondary and linebacker issues.

-The Rams stocked up on their defensive line, taking DT Aaron Donald, who fell to them at thirteen despite all the rising his stock has done in recent weeks. This outfits them with Chris Long, Robert Quinn, and Donald on an intensely frightening defensive line.

-There was a report going around Thursday night that the Texans were contemplating making a trade for Patriots back-up QB Ryan Mallett. That would significantly affect their draft needs and would let them re-load at receiver in a deep class or start filling in other areas. (Running back springs to mind with the loss of Ben Tate and the decrepitness of Arian Foster.)

-The Saints traded up for receiver Brandin Cooks, who will be dynamic and explosive in the Superdome. The other end of that trade was the Cardinals, who slid back down to 27th to take safety Deone Bucanon.

-Darqueze Dennard was selected by the Bengals, who can now plant him with Dre Kirkpatrick as the the proper replacements for the aging Leon Hall and the declining Adam Jones. I dig it.

-The Panthers got their over-sized receiver in Kelvin Benjamin. The dude is 6’5″ and 240 lbs. He’s going to be a mess for anyone to handle and can develop into Carolina’s eventual number one wide-out.

-Did anyone else see that the 49ers had an insanely large “draft party” in San Jose? I mean, if being supah-crowded in a large room while some projection screen has the draft on it is a “party,” then I will poop all over it. As for the team themselves? They drafted safety Jimmie Ward, a reach in Mike Mayock’s eyes. Wah wah.

-At the end of the night, we kept hearing that a team might move back into the first round by trading with the Seahawks for the 32nd pick. The Vikings were that team, swooping in at the end of the night to take QB Teddy Bridgewater, who had also been hanging out in that green room all night long, but didn’t get a camera on his face every 15 seconds. He oviously needed a nickname as cool as Johnny Football. Ya know, something like Teddy Ruxpin. … Dammit. I should have come up with that.

So Joe, what’s going on tonight?

-There will be oh so many quarterbacks going in the top half of round two. Jimmy Garoppolo, Derek Carr, and A.J. McCarron were all QB’s that could have been snagged at the end of the first round. With teams like the Texans, Raiders, and Titans in thew top half of the round, don’t be surprised to see two or three of them go off the board early. 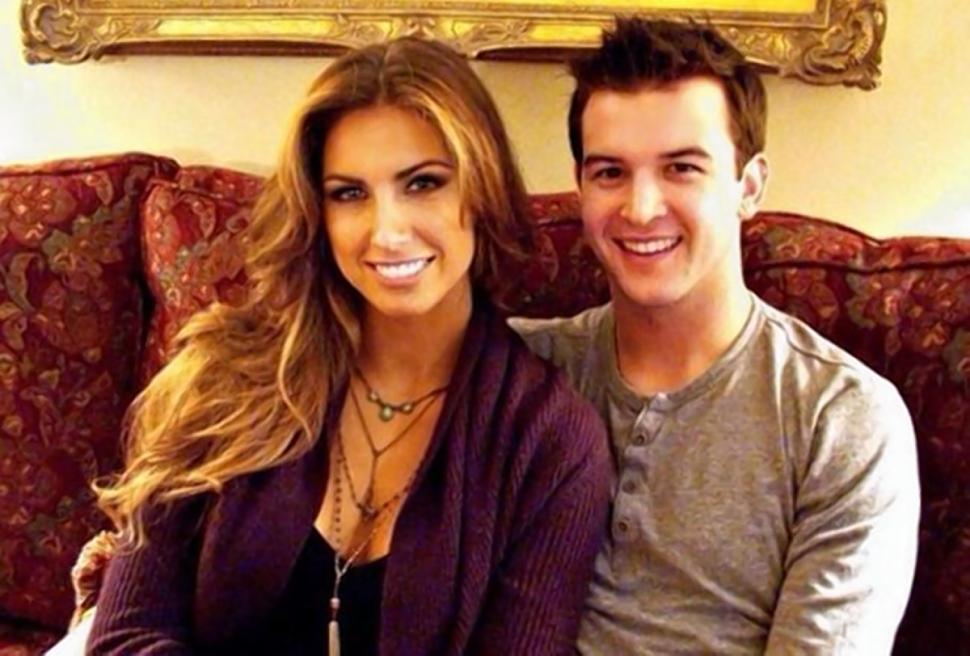 I can only hope McCarron’s girlfriend Katherine Webb is on camera at some point.

-We’ll finally have a running back taken!!! Ohio State’s Carlos Hyde will almost undoubtedly be the first RB to hear his name called tonight. The value of running back has been slipping in recent years, to the point where last night was the second straight first round where no RB’s were taken. First time that’s ever happened.

-And of course we’ll get to see/hear all the psycho fans at Radio City Music Hall jeer and complain about anything and everything. Thanks New York. Always classy. (I mostly blame the Jets fans.)

Night two of the NFL Draft is approaching! Get your comfy pants on.