Does it live up to the hype of its graphic predecessor? 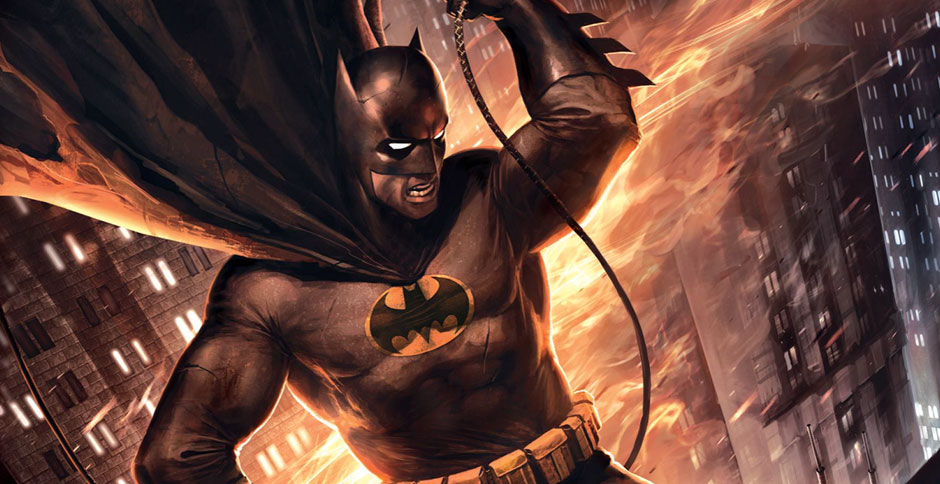 When I originally saw the preview for The Dark Knight Returns animated movie, I was wrought with nerdish emotion. I’ve been impressed with the DC animated offerings thus far, but none of them (aside from Batman: Year One) have tackled a storyline so revered. But unlike prior entries in the series, DC didn’t force this story-line into one 75 minute movie, instead opting for two parts, amounting to one 150 minute saga.

After releasing Part One in November, DC finally got Part Two out in early February, letting us view the longest animated comic epic ever. (I think. Someone can check me on this one if they want to spend the time on it.) Per usual with these animated flicks, my dad and I sat down to watch Part Two over the weekend and came away overly contented.

I won’t go into the whole plotline (because you should just read the damn book like a good nerd), but The Dark Knight Returns follows the story of a retired Bruce Wayne/Batman, who’s in his later years. When he is confronted with the rising gang called the Mutants, he decides he can no longer sit idly by and watch as innocents suffer. He once again dons the cape and cowl and begins to clash with foes both new and old. In it’s physical form, this story is regarded as one of the greatest graphic novels of all-time and one of the significant factors in Batman’s transition from the cartoony nature that inspired the Adam West show to the dark and grim version that accounts for Christoper Nolan’s The Dark Knight Trilogy.

I was pleasantly surprised with how much made it into the final cuts of both films. I may not be bombarded with the on-air “news” segments as I am in the comic, but there are still plenty to go around. Bruno still walks around with swastikas painted on her exposed (and probably plastic) chesty bits. The Mutants still talk with weird syntax and sentence structure. We’ve still got Ronald Reagan as President. So it’s nearly identical to the book you’ve already read. 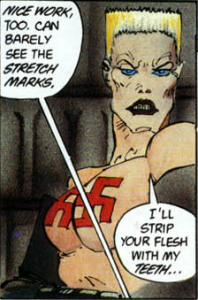 Try looking at this as a kid. So messed up.

There are a few differences here and there, but nothing of extraordinary note. For example, Joker’s return to crime during his talk show appearance comes under differing circumstances. There is no female doctor accompanying him and Dr. Wolper onstage, so he doesn’t end up kissing her with his poisoned lipstick and driving her insane as she raves about sex. (Something I assume was edited to maintain a PG-13 rating) Instead, he gashes Dr. Wolper across the throat with a broken mug handle. While the change may not deliver disturbances on as many levels, it’s highly effective nonetheless. But as there are so few alterations of this kind I have to tip my hat to DC for staying as true as possible while attempting to reach such a wide audience.

The assemblage of voice talent for The Dark Knight Returns is most impressive. Peter Weller (Robocop) stars as the aged caped crusader, giving him a threatening ambiance that almost no other voice could bring. It’s his performance that anchors the movie. Ariel Winter (Modern Family) plays the young and talented Robin/Carrie Kelley. Her exuberance throughout plays as a great contrast to her grizzled super-boss. Mark Valley (Hard Target, Boston Legal) is featured in Part Two as Superman, who is now essentially an agent of the United States government. Michael Emerson (Lost) appears as a Joker that seemed to lose a bit of his creepiness in translation from the page. The bigger moments were there, but I have issues any time the Joker sounds “normal.”

Maria Canals-Barrera (you’ll know her as Hawkgirl from the Justice League series) steps in as Commissioner Gordon’s replacement, Ellen Yindel. She sounds just as bad-ass as she ever did. Michael McKean (the Christopher Guest flicks) plays Dr. Bartholomew Wolper, which makes me tremendously happy. A – He’s working. B – He’s great. Even Conan O’Brien pops in for Part II as talk show host Dave Endochrine, in about as perfect a casting as you can find. It’s this thoughtful attention and creativity to filling these roles from Casting Director Andrea Romano that makes her one of the best in the business.

And as we’ve come to expect from DC Animation, The Dark Knight Returns features an art style that is very much in line with the original comic series, which in this case means the illustrations of Frank Miller. Batman has a hulkish form to him, lumbering across the screen when he’s not flying around it during action sequences. The art direction is dead-on, perfectly adapting this 80’s masterpiece for a new medium.

From start to finish, The Dark Knight Returns Part I and Part II form an animated epic of truly wondrous proportions. Fans of the original series will not be disappointed in the slightest, while newcomers will find themselves entrenched in this gritty feature. I can’t wait to watch them again.