In the near-month since the regular season ended and Black Monday came to pass, the NFL’s coaching vacancies have been under the spotlight as fanbases sat with baited breath as to who their team would look to for the foreseeable future. Now that every spot has been filled, it’s time to analyze these hires the only way I know how: with snark.

O’Brien’s been a hot name in coaching after he brought Penn State back to legitimacy following the Paterno scandal. He earned that job after calling plays as the offensive coordinator in New England after Josh McDaniels left to coach the Broncos. Despite their claim that they wanted “NFL head coaching experience,” the Texans pounced on O’Brien.

This one’s hard for me to call. O’Brien’s NFL background will prove invaluable, but I’m not sure what I learned from his stint at Penn State. He had records of 8-4 and 7-5 in his two seasons, albeit with a talent pool made shallow by the sanctions imposed by the NCAA. He’ll have Romeo Crennel as his defensive coordinator, so at least there will be someone there to tell him what not to do as an NFL head coach.

The former head coach of the Indianapolis Colts received another chance to be “the man” from Detroit, who fired Jim Schwartz after another disappointing season. Caldwell will be tasked with “fixing” Matthew Stafford, King of Throwing Awkward-Angled Interceptions. Detroit didn’t take long to make the deal, either.

The Lions executed one of my favorite firings, but I equally hate this hire. What has Jim Caldwell really done? He never “ran” the offense in Indianapolis, even when he was the offensive coordinator. He started as their quarterbacks coach, but that original Indy offense is the lovechild of Tom Moore and Peyton Manning. Caldwell succeeded Tony Dungy and essentially made no changes to the team, keeping the same systems in place. His 2-14 season offered a lot of evidence evidence to being a sub-par coach. He then went to Baltimore as the quarterbacks coach, and quickly became the OC late last season. But I don’t attribute most of the Ravens’ Super Bowl success to Caldwell. Instead, I’d credit the re-shuffling of the offensive line, which gave Joe Flacco enough time to throw those deep-balls he’s so fond of. We saw what happened in 2013 when Jim had a full season as OC. Flacco regressed considerably and Ray Rice fell off the face of the planet. Yeah, I want that guy as my head coach. This is more about Detroit changing the culture after douchebag Jim Schwartz more than it is about Caldwell’s X’s and O’s. And I’m never a fan of hiring someone just because his personality is the polar opposite of the last guy.

Lovie Smith has been out of coaching for the past year following his release from the Chicago Bears after nine seasons as their head man. Before his stint as head coach, he was the linebackers coach in Tampa under Tony Dungy. He was then the defensive coordinator in St. Louis when Mike Martz was running the show. Smith has a lengthy resume and deserved another head coaching job at some point. This was barely a search though! As soon as Greg Schiano was out the door, Smith’s name was bandied about as a replacement, as Tampa was looking to re-live some of its glory years.

A lifelong fan of the Bears, I am well-versed in the lore of Lovie Smith. I thought he was pretentious most of the time, giving Belichick-like press conferences in a Texan dialect without having earned the right to do so. His Tampa-2 system became stale as the years passed, so his year off needs to have helped educate him on the scheme’s flaws. But after Greg Schiano, Smith is the type of coach that really can instill a change in the locker room dynamic. He’s a player’s coach and won’t try to bully his team into playing hard. They’ll play hard for Smith because they want to. He has a talented roster and has already filled out his staff with guys like Leslie Frazier (formerly of Minnesota) and Jeff Tedford (coached Aaron Rodgers at Cal). He’s set to succeed… more than Schiano anyway. 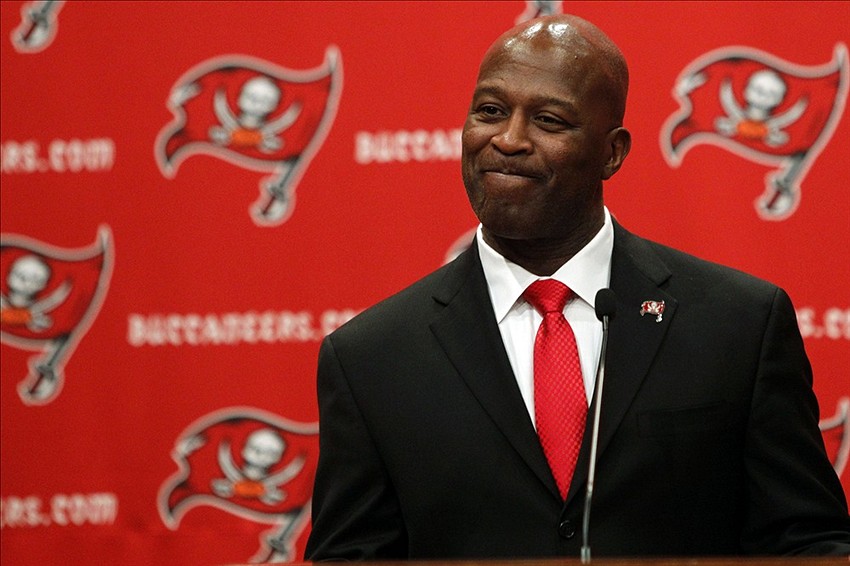 “Mike Glennon is our quart- … I’m sorry. I can’t finish that sentence.”

The “other” Gruden made a name for himself as a player/coach in the Arena Football League in the early 2000’s, after which he jumped to the NFL and became an assistant under his brother Jon during his time with the Bucs. Most recently Jay had been the offensive coordinator for Marvin Lewis and the Bengals, coming to the team the same time as QB Andy Dalton. That Bengal offense has steadily improved for the past three seasons under Gruden, who as maximized the production from what I consider to be a merely above average quarterback. In Washington Gruden will have to deal with the hopefully less-meddlesome Dan Snyder, who seems to have turned over the reins to GM Bruce Allen. Judging from the early reports, this job was Gruden’s the whole time.

Washington gets the best of both worlds with this hire. They have a “name” in Gruden, but also one of the intrigue that comes with a “hot” assistant coach getting his first head coaching gig. While it’s not exactly apples to apples, Gruden’s time as a head coach in the AFL and college will certainly make his learning curve less steep.

Ken made his bones as the Pittsburgh Steelers’ offensive coordinator during their Super Bowl run in 2005. That earned him the head job in Arizona, where he and Kurt Warner led them to their own Super Bowl appearance in 2008, where they lost to (surprise) the Steelers. After that Whis had to deal with some of the worst quarterbacks the league has ever seen in John Skelton, Max Hall, Derek Anderson, Ryan Lindley, and Kevin Kolb. He was let go after the 2012 season, where he joined up with Mike McCoy’s new staff in San Diego, where he spent the year as their offensive coordinator.

This is a great hire for the Titans. After that series of bed-shitters under center in Arizona following Kurt Warner’s retirement, Whisenhunt has a really good idea of what a bad quarterback looks like. Spending a season with Philip Rivers likely reminded him of a great quarterback’s traits. Now he has to take that knowledge and figure out DEAR GOD WHICH ONE IS JAKE LOCKER?

Mike Zimmer has been a defensive coordinator in this league since being promoted to that position in 2000 with the Dallas Cowboys. He spent a year in Atlanta under Bobby Petrino, before the head coach vaulted back to the college ranks. He’s spent the last six years in Cincinnati, heading a defensive unit that’s been consistent and aggressive. He’s been on the interview circuit for years now, and finally has the chance to form a team in his fiery image. (Dude’s a swear machine, but it works,)

Zimmer’s one of those guys that has been hanging around the league for forever and a day but kept getting passed over for head coaching gigs. I’m happy he’s getting his time in the sun. He comes into a team that will be undergoing drastic changes on both sides of the ball. Will Jared Allen be back? Which quarterback (if any) will still be on the roster when the season rolls around? Is it time to trade Adrian Peterson? How will they handle the two years outdoors? So many questions for a first year head coach to answer.

Pettine comes from the Rex Ryan coaching tree, which is just a silly phrase to consider. He began as a quality control coordinator with the Ravens during Rex’s tenure, and followed him to the Jets when Ryan got the head coaching job. He made a name for himself as defensive coordinator during Ryan’s more successful days in New York. In 2013 he spent the year as coordinator for the Buffalo Bills, whose defense saw a dramatic upswing from 2012. After being spurned by candidates left and right, the Browns decided to hire Pettine after three interviews.

Yeah… you know what I said before about head coaching experience? This guy really doesn’t have any. The last time he was a head man was back when he coached high school football. But he apparently helped Rex Ryan with his “organization,” which cannot be an easy task. Pettine’s first big hire HAS to be finding a creative offensive coordinator that can get the most out of whatever quarterback the front office can find him.

But let’s be fair, the Browns didn’t have a lot of options anymore. They were turned down by: Josh McDaniels, Adam Gase, and Todd Bowles, as well as the aforementioned Whisenhunt and O’Brien. They seemed to be holding out for Dan Quinn, Seattle’s defensive coordinator, but there was no guarantee Quinn would have wanted the job after the Super Bowl. Cleveland hired the ONE guy who actually wanted to come to Cleveland. Now they have to prove to the league that Pettine won’t be fired after one season like the Chud before him.

But at least this guy won’t be on the team.

And that’s all I have for you today! Check back this week for several articles as I prepare you for the Super Bowl!