Black Monday. It comes every year in the NFL. The day after the regular season ends there are twelve teams celebrating the opportunity to challenge for a Super Bowl title. The other 20 teams are left with questions, some of which are answered by the firing of head coaches. Gary Kubiak was already released by the Texans earlier in the season, so here are the newest job openings to join Houston’s.

The Browns jumped the gun Sunday night and fired Chudzinski hours after his loss to the Steelers. This is less than a year after Chud was hired for the position. His staff was not released however. Retaining those employees will be up to the incoming head coach.

This is semi-absurd. The Browns are now forking over a $10.5 million pay-out for Chud’s termination. That’s a lot of dead-ass money. And only a year into a rebuilding process? I’m floored. Josh Gordon was really coming along and I thought with the right quarterback and Norv Turner’s offense that this team could really take forward-ish steps in 2014. Now they’re almost starting all over again.

Vikings started Monday morning off with news that Leslie Frazier had been relieved of his duties after over three seasons on the job.

This feels like the right time. The Vikes fell ass-backwards in 2013 after backwards after making it to the playoffs in 2012. And the Josh Freeman signing and subsequent burying on the bench was a roster debacle. Someone had to take the fall for that massive failure. I’ve talked too long about Leslie Frazier already.

Washington followed shortly after the Vikes news with the release of Mike Shanahan. Shanny had one year left on his deal at about $7 million, but the RG3 fiasco coupled with Shanahan’s sheer passion for being fired clearly led to this result. The process itself seemed odd as it unfolded on Monday, with oddly shrouded secrecy and security, stalled media traffic, and the lack of Dan Snyder quotes. Team VP Bruce Allen now gets to call the roster shots. For now. And as it is in Cleveland, not all of the coaching staff was let go. 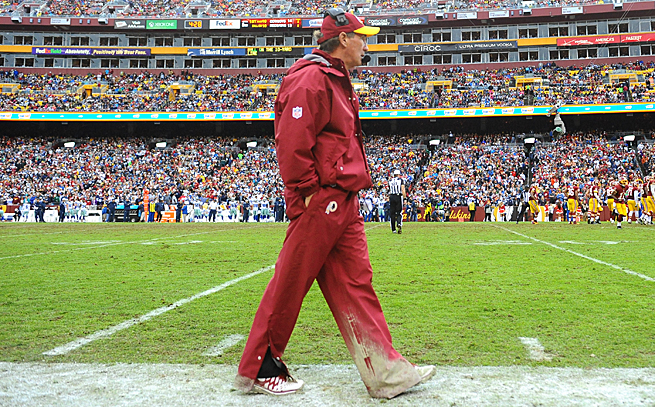 With all that money he can afford to hire someone to wash his freaking pants.

This marriage had to end as soon as possible. Shanahan and his son (who was also fired) were just tearing this team apart in certain ways. Their relationship with the franchise quarterback had become untenable and it was apparent to nearly everyone. I’m not sure what Shanahan does from here, but he certainly doesn’t have to work next year if he doesn’t wanna. I’d pop a squat and just let that seven million roll right in.

Following a season of quarterback drama and MRSA infections, the Glazer family decided to part ways with Schiano. Also not escaping the axe was GM Mark Domenik. Rumors are already flying about former Chicago head coach Lovie Smith being the front-runner for the team’s vacancy. Smith was formerly the defensive coordinator during Tony Dungy’s tenure in Tampa.

Schiano came in from a Rutgers coaching gig with ideas of bullying his way through the NFL, having his defense swipe and go at the knees of offenses in their kneel-down formation. Squabbling with Josh Freeman probably didn’t help maintain his grip on the locker room, especially after Freeman wasn’t voted to be a team captain again. That voting process was secretive as balls and ran directly through Schiano, who some suspect to have rigged/lied about the outcome. That’s what a Schiano Man would do.

After starting the season 6-3, Jim Schwartz’s team fell to 7-9 and couldn’t make it to the postseason despite lengthy injuries to the starting quarterbacks of their main NFC North rivals.

This is my favorite firing BY FAR. Jim Schwartz has been a giant douchebag and an unequivocal fucking asshole throughout his tenure in Detroit. Honestly. He’s a prick. He went 29-51 as the head man with the Lions, a record that includes recovering from the disastrous roster Rod Marinelli had when they went 0-16. He had two years and nearly $12 million left on his contract, so you know the Lions were serious about letting him go. Unlike Schiano, Schwartz had no sense of how to discipline his team, which led to countless and costly on-field penalties. As a Bear fan, his ineptitude will be missed. Peace out Jim.

Still on the Bubble

So Mike’s been in the Titan organization for some absurd number of years. I’d wager they’re hesitant to fire him, but his support of offensive coordinator Dowell Loggains doesn’t help his case. The Titans need a new offensive system, and perhaps someone new to mentor Jake Locker.

The embattled Raiders head coach just finished his second season of salary cap hell, and now that he will actually have an offseason to bring in a few decent free agents, he might be fired. He hasn’t been told he’s gone and there are rumblings he’s returning, but nothing has been announced yet.

I have no freaking clue what’s going on in Miami. That’s just a disaster area. Philbin could be fired, but certainly offensive coordinator Mike Sherman could be on the chopping block.

Let’s quickly get through some of the non-news of the day, which is to say let’s discuss the coaches that notably didn’t lose their jobs.

Hey, he went 8-8 with freaking Geno Smith throwing 20-something interceptions. That can’t be called a terrible coaching job.

He won two Super Bowls… in the past seven seasons. He gets a reprieve for Eli Manning being a travesty this year. But so long to OC Kevin Gilbride, I’m guessing.

He went 8-8 again. He was knocked out of the playoffs in the final game of the season by a division rival… for the third straight season. But hey, his quarterback for that game was Kyle Orton. Give him a break, huh? But clearly Monte Kiffin is all but gone. That defense was putrid.

Whew. We’re done here, right? Joey’s gotta get some sleep. Stay tuned for more happenings around the NFL, as well as for The Opening Drive of Wild Card Weekend!