Before this weekend hits and we have to dive deep into the pool that will be the Divisional Round, I had a few lingering thoughts about the four games that occurred last weekend. (Pardon my slow thoughts. Sometimes my best opinions don’t rise to the surface five minutes after the game ends,) If you’re ready for one last look, read on!

-Can we pump the brakes on San Francisco’s greatness? They barely beat the 8-7-1 Packers. And despite all the hype surrounding Green Bay, they weren’t exactly a known commodity this season. They stumbled out of the gate with Rodgers, found a warm streak, then lost their quarterback and barely made it into the playoffs thanks to a shoot-out with a division rival with a horrid secondary. Dom Capers’ defense has been crappy most of the year. Now, I’m not claiming the Niners are a BAD team per se, but they might just have the Packers’ number. Perhaps one win is not indicative of future performances against other legit conference contenders?

– Andy Dalton’s ceiling seems to be that of a slightly above average quarterback. That we have mostly figured out. But we can’t let his inconsistent weapons have a pass just because of the ginger’s struggles. His tight ends (giggle) have not performed up to their lofty draft standards, and outside of A.J. Green (whose routes aren’t alway clean and has suspect hands in big moments), his receivers are sketchy. Giovanni Bernard had huge drops on what were just simple dump-offs. I like Marvin Jones, but who knows how dependable he’ll be next season? Regardless, the quarterback isn’t the only problem for Cincy’s passing game. 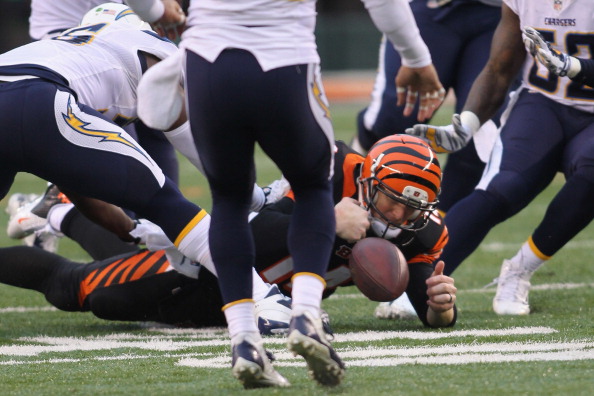 But that fumble SURE didn’t help.

-That injury to corner Brandon Flowers killed the Chiefs’ title hopes. It’s no excuse for allowing T.Y. Hilton 234 yards on 13 catches, but it is a factor in the total failure of a defense that early in the season was so dominant. If the Chiefs can’t play man coverage (well) like their gameplan calls for, I’m not sure their defense yet has the adaptability to cope.

-If the Eagles can just get enough play-makers on the defensive side of the ball, they’ll be extremely dangerous next season. I’m talking ball-hawks that will get turnovers that their offense can easily turn into points. (Though not winning even with two Drew Brees interceptions is a problem.)

Short and sweet! I don’t want to overload your poor eyes before the pigskin-fronted assault I will lead this weekend in advance of the Divisional Round. Gird your loins… for football!