My phone blew up about ten minutes into my workday this morning as I found out the Bears came to contract terms with a familiar face. Jared Allen, Master of the Mullet and Lasso-er of Sacked Quarterbacks, has been signed away from NFC North rival Minnesota and whisked out from under the noses of possible suitor Seattle. It’s time for some Mostly Average Analysis! 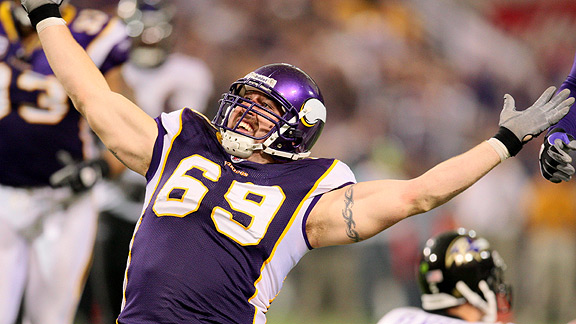 The contract details were reported as such by Adam Schefter. The fourth year is voidable, which would make it only a 3 year, $24M deal. But with a guaranteed number of only $15.5M, this really ends up being a two year contract. This is comparable to the money given to Lamarr Houston and it’s less than half of the money that Julius Peppers’ bloated deal would have eaten up.

Phil Emery strikes again. Allen was a prized veteran free agent because of his well-documented non-stop motor and his continued high-level production as a pass-rusher. Who wouldn’t want to add double-digit sacks to their defense? He may not be a run-stuffer (not that he ever really was), but that won’t be his part in Chicago’s four man defensive front. In passing situations Allen will rush from the outside as Lamarr Houston heads inside to penetrate from the defensive tackle slot. When you combine that with Willie Young at the opposite end, the Bears have completely re-vamped their pass rush.

If you need some analytics to help assuage your fears, let me help. Here are some random stats, courtesy of Twitter and some research of my own:

-Allen played more snaps (1083) in 2013 than any other member of the Viking defensive line. That continues a six year-streak that started back in 2008.

Now obviously stats and past production aren’t always a precursor to future successes, especially with an aging player. But with only two real years on this deal, Allen has a real chance to have a drastic impact during his stay in Chicago. Staying in the NFC North means he can rely on his experience against familiar opposing linemen. And we can all expect an amped-up Allen versus the Vikes twice a year. We can also expect newly-themed photos on his website.

Are you excited for Allen’s arrival in Chicago? Or do you think he’s already over-the-hill? And most importantly, do you think he needs to bring back the mullet, Chicago-style? Let us know below!