Everyone is getting into the mega-franchise game these days. Marvel kicked it off with its immensely popular series of films revolving around the Avengers. Fox is knee-deep in it with X-Men movies of varying timelines and continuities. Sony thinks it can do the same with the Spider-Man roster of heroes and villains. The one problem with all of those studios’ franchises? They’re all Marvel properties. Spider-man and Wolverine can’t team up with Iron Man and Thor to stop a battle between the Hulk and Juggernaut from spilling into downtown New York.

This is where Warner Brothers has always had the upper hand, even if they didn’t realize it. All of the DC properties are under their roof. It’s only recently that they’ve begun to explore all the possibilities of a shared movie universe. Now that Christopher Nolan’s Dark Knight trilogy has ended and a new super-world was established in Man of Steel, the rumored schedule of DC comics had shed light on WB’s plan to match (and one-up) the Marvel concept. It’s time for judgement. Nerdd Judgement.

Right off the bat here (see what I did there?), let’s get one thing straight: this isn’t a true Superman sequel. This is a Justice League prequel. Batman (the controversial Ben Affleck), Wonder Woman (the apparently “too thin” Gal Gadot), Cyborg (the unknown Ray Fisher), and Aquaman (reportedly played by badass Jason Momoa) are all confirmed characters as Supes faces off with Lex Luthor (Jesse Eisenberg) and whatever creation/other baddie Luthor deems fit for service. Little is know about the plot, but expecting some fallout from the mass destruction of MoS isn’t a crazy notion. Apparently Aquaman will show up super-pissed about what the Kryptonian terraformer did to the Indian ocean. Wonder Woman will be there because… uh… why not? And Affleck’s Batman will be a grizzled crime-fighting veteran, who will certainly clash with Supes’ personality. Because DRAMA.

But BvS: DoJ is only the tip of the proverbial iceberg. Get ready to sink your ship…

Dubbed “Shazam” because Marvel actually owns the rights to “Captain Marvel,” This is probably the most interesting/uncertain properties among DC’s slated films. He’s magical and has never gotten the same attention as the big three, despite his off-the-charts powers. If they follow the comic, young boy Billy Batson is endowed with the powers of the wizard Shazam, which lets him turn into the adult and super-powered Captain Marvel when he utters the word “shazam” and is struck by the bolt of lightning that always follows. 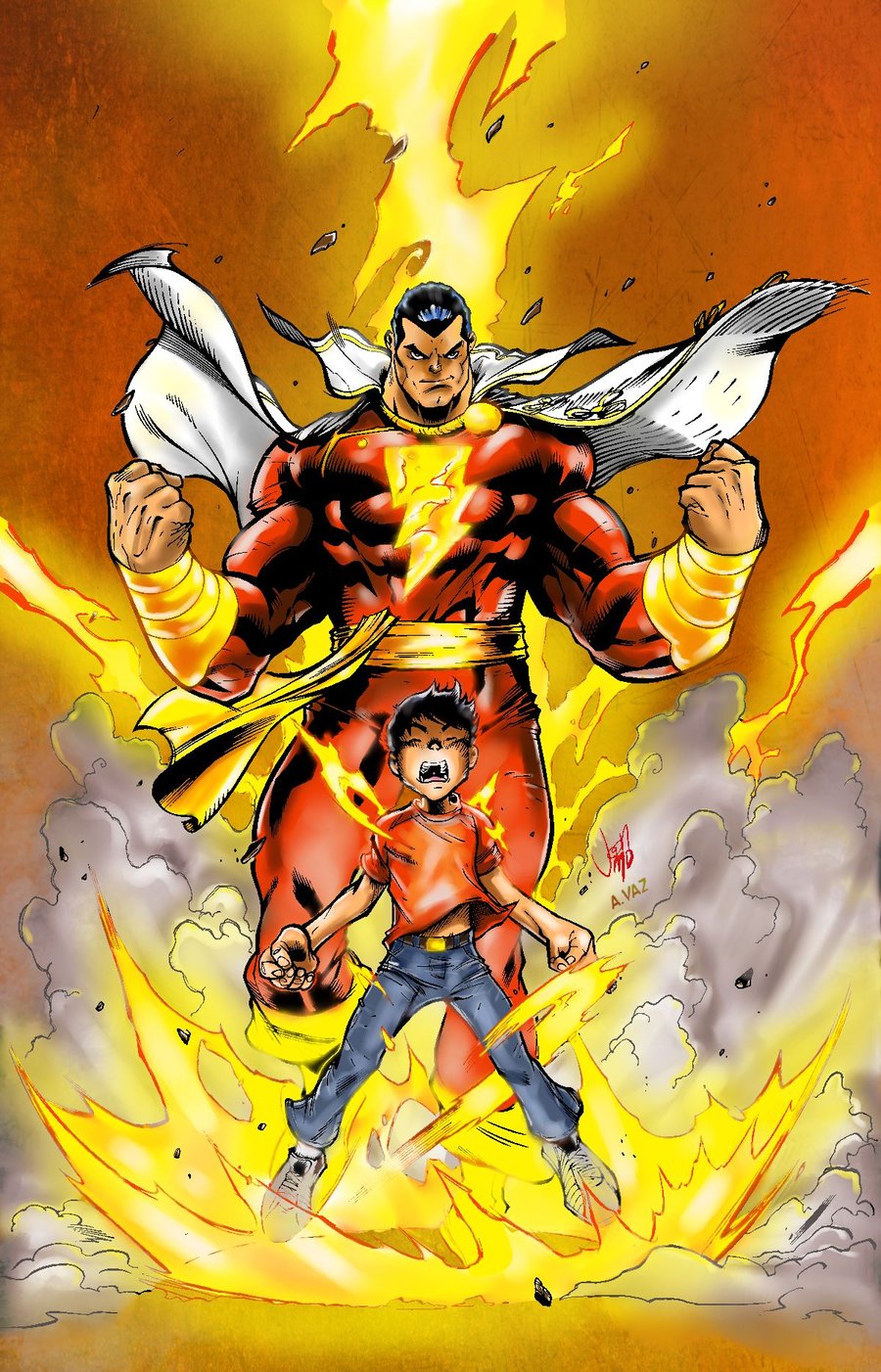 Casting news to keep your eye on is The Rock as Black Adam, the ancient Egyptian counterpart of Captain Marvel. Big ol’ Dwayne Johnson visited DC not too long ago to discuss a role in an upcoming movie. He’s been linked to Green Lantern (John Stewart) and Lobo, but Black Adam would be a perfect fit as well. GL would seem to be an odd choice, as The Rock would physically dwarf Cavill’s Kryptonian and Affleck’s Bat in any scene. Saving The Rock for a “non-human” role like Lobo or Black Adam would make more sense. 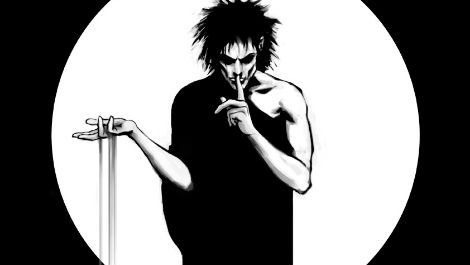 Just as Marvel is taking on magicky stuff head-on with their Dr. Strange film, Warner Bros has gone full steam ahead with an adaptation of the immensely popular and gothic Sandman series from Neil Gaiman. Joseph Gordon-Levitt is heavily involved in this film as the producer and will likely play Dream, but I haven’t seen that confirmed anywhere yet. This series was in pre-production hell for YEARS as writers tried unsuccessfully to adapt it to any visual medium. Of all the films in DC’s slate, this is the one most likely to not tie-in directly. It should stand alone.

And here it is! Warner Bros’ answer to The Avengers, Justice League will see all of the BvS-established heroes (and some likely newcomers) join the fray against some massive threat, which at this point is rumored to be Darkseid, Searcher for the Anti-Life Equation. You know, sorta like Marvel’s Thanos, who wants to date Death. Literally. This team-up feature will be even more loaded than BvS, which is saying a lot. If it flops, look for massive downstream changes.

This is the movie that has me the most anxious, and not just because it’s centered around one of my favorite comic book characters. Between DC and Marvel’s cinematic schedules, this is the only goddamn movie headlined by a female character. Which is of course, a shame. Based on the past performances of Elektra and Catwoman, both studios/management clowns have reasons (however misguided and subjective) that female superhero tentpoles just won’t work at the box office. Barring a Black Widow solo-flick sneaking into a crowded Marvel schedule, it looks like WW’s entry in 2017 will be the initial toe in the feminine ass-kicking pool. Reports have surfaced regarding the Amazonian warrior’s outfit in BvS and it sounds similar to what showed up in this fan-flick we raved about at a while ago (hopefully with straps on that top). So far, so good. Just give me angry gods, giant monsters, and Gal Gadot swinging swords. I’m all in for that. And since it’s releasing only a few months after the mega-movie Justice League, it has a shot for piggy-backed success. 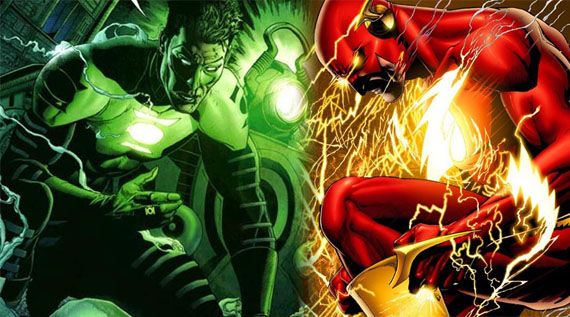 People have already jumped the conclusion that Green Lantern is going to be in the Flash TV show just because “Ferris Air” or whatever shows up as a deserted airfield in the promo trailer. That’s a stretch, even for comic nerds. No one should be leaping even further to assume that the TV Flash (Grant Gustin) and the very-unconfirmed TV GL will be headlining this flick, which was another pleasant surprise in the schedule . Warner Bros doesn’t seem to have the inclination to combine these universes, a’la Marvel. This will carry-forward the two actors (which will not include Ryan Reynolds) from the Justice League movie into a duo-flick, which should just be subtitled The Brave and the Bold already.

And in semi-admission that BvS: DoJ is not a true sequel to Man of Steel, this tentative titling is on the books for 2018. Presumably Henry Cavill can get back to flirting with Amy Adams. Because I was a fan of hers. And in terms of the larger schedule, don’t be surprised if this lone 2018 entry ends up being joined by other movies that are as-yet unannounced.

And FINALLY, after three years of build-up’s, team-up’s, and ramp-up’s, Ben Affleck will have a solo bat-flick in 2019. I might be in the minority here, but I’m unbelievably excited for his take on Batman, especially if Affleck decided to get behind the camera as well. (And because of the badass costume we’re getting in BvS.) If you’re looking for a true detective-style Batman film, this could be the likeliest candidate. We’ll have seen him in world-altering super-action already, so a smaller-scale plot would be ideal. I’m also a fan of the way WB is slowly integrating and re-introducing The Caped Crusader. We’ve had so much of him in the past few decades that he can take a much-needed break from dominating the screen in order to let these other characters come to the forefront.

After years of failing at nearly everything that didn’t involve Batman, Warner Brothers seems to have finally gotten the hint. More superheroes = more fun. Now, clearly I’m perturbed by the lack of female-centric films, but even more distressing is that Wonder Woman is the only female superhero in ANY of these movies. It’d be nice if Justice League featured more than just the Amazonian Princess. (Hawkgirl anyone?) For now, I’m pleased with these offerings. There’s something here for everyone. BvS and Justice League are the loaded action movies. Shazam has the magic arena covered. Sandman occupies the high fantasy front. Wonder Woman should be an epic war feature. Flash/Green Lantern has all the makings of a superhero buddy cop movie (unless the droll John Stewart is GL). And The Batman can be crime noire at its finest. We just need them to not suck and we can happily continue on in this superhero move renaissance.

What do you think of Warner Bros’ stacked line-up? Let us know below!