Once again, the Chicago Bears started off slower than their opponent. Against the New Orleans Saints, that sloppy beginning plagued with mistakes proved to be too much to overcome. Let’s recap this one in another Gameday Preview! 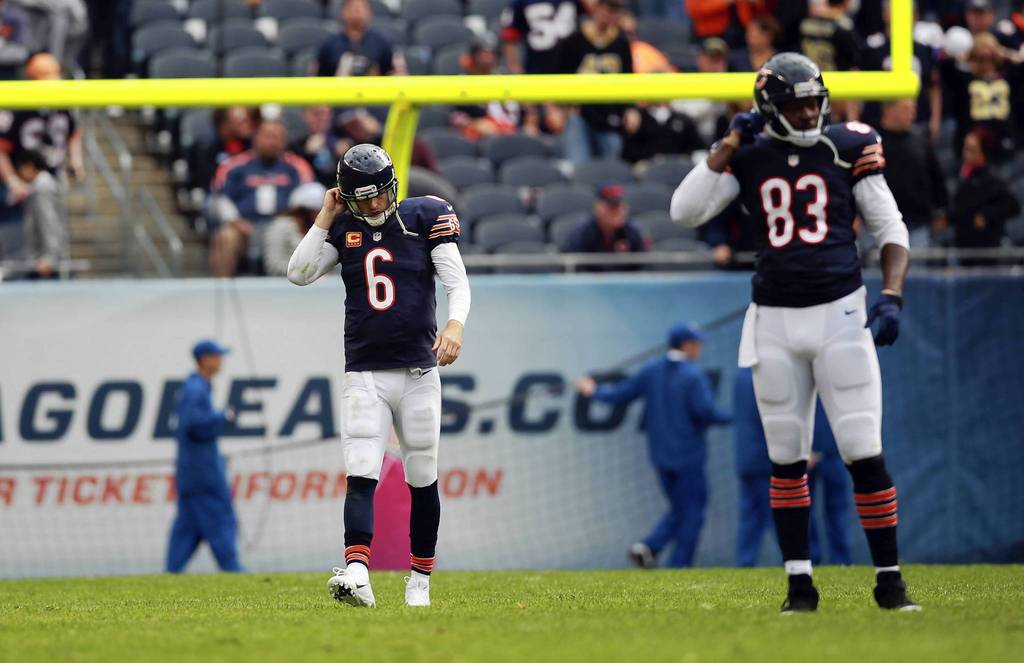 After giving up a field goal on the Saints’ opening possession, the Chicago Bear offense couldn’t sustain a drive. Their second series saw Jay Cutler sacked by DB Mike Jenkins on first down, fumbling the ball. Drew Brees had a short field to work with, starting his drive at the six yard line. Credit the Bears’ defense with holding tough on such a short field, giving up only another three points. At 6-0, this game wasn’t lost. Cutler’s third drive saw him scramble for a first down, but then throw a near interception and book-ended by a sack. No offense to be found just yet.

Two big passes of 29 and 38 yards to Jimmy Graham set the Saints up at the seven yard line, where two plays later Pierre Thomas caught the first of his two receiving touchdowns. A 13-0 lead looked insurmountable versus this new Saints defense. Then Marc Trestman finally saw his offense find a groove. An 18 yard pass to Martellus Bennet kicked off the series. Matt Forte’s gritty 15 yard run gave the Bears some swag back. (As if that’s a thing.) A 31-yard catch by Alshon Jeffery over the middle moved the ball to the 11 yard line. Two plays later Cutler rewarded Jeffery with a TD pass over the left side. 13-7 was WAY more palatable.

Lance Briggs made impact plays in the first half, something we hadn’t seen from the linebacker earlier this season. He made a key tackle-for-loss on a second and one run early in the game and controlled his gaps. The defense played better in the first half than the score might indicate, as they were put into holes by an inconsistent offense. But they were gassed as the second quarter drained on.

A Pierre Thomas screen pass ended up in the endzone with 23 second left in the half, putting the Saints’ lead back at 13 points. The blocking was fantastic, with Bear defenders barely sniffing Thomas until he was into the secondary. Chicago had its adjustments to make following that first half. Cutler was sacked three times in the first two quarters, as the Saints were blitzing far more often than they had in previous games. Chicago’s offensive line was unable to pick up their blocking assignments.

New Orleans started the second half with a seven minute drive, which ended in another field goal, making the lead 23-7. Nate Collins, who started today as part of the DT rotation and got a sack on Brees earlier in the game, went down with an injury on the final third down of that drive. That wasn’t going to help the pass rush against Drew Brees.

Following that field goal, Trestman’s offense had a fantastic start to their drive, thanks to a 42 yard pass to Jeffery. A 13 yard throw over the middle to Martellus Bennett put the Bears at the four yard line with 1st and goal. Four passes later (one called back due to a penality), the Bears were forced to settle for a field goal. I’m failing to see why Trestman couldn’t even call ONE run near the goal line. It’s not as if that ever works. BALLS.

The next Chicago drive started nearly as promising, with Jay Cutler scrambling for 12 yards on what was supposed to be a running play. Another first down later and the Bears were in Saints territory and in a four-down situation. Throws on third and fourth down found the hands of Earl Bennett, but were dropped. Chicago’s drive ended with no points, something that happened all too often during the game.

For all the plays Briggs made in the backfield during the game, he’ll be known for his being suckered in on a fourth and one play late as New Orleans tried to drain the clock. The Saints were likely only going to try and lure the Bear defense offsides, So Briggs bit on a play that WAS NEVER ACTUALLY GOING TO HAPPEN. Dammit Lance.

Trestman’s offense made some noise with less than two minutes to as Jay Cutler found Jeffery once again 58 yards down the field. A throw to the left side of the endzone resulted in a Brandon Marshall touchdown, making it a ten point game. A draw right up the middle by Matt Forte gave Chicago two more points and a sliver of hope in an eight point deficit. And for a second straight week, a Bears’ comeback hinged on an onside kick, which was failed.

After forcing a punt, Jay Cutty had one more chance. With 22 seconds left on the clock, Cutler found Jeffery for his tenth catch of the day, but in the middle of the field the receiver had no way to stop the clock. Time ran out on the Bears and the Saints went to 5-0.

-We see you Jimmy Graham. Over 100 yards in the first half is ridiculous.

-Eff yourself Briggs. You’re too old for that shit.

-The Packer shellacked the Lions, so this was a chance for the Bears to pull back ahead in the division race. Instead, things got a lot closer.

-Alshon Jeffery’s 218 receiving yards is an all-time Bears record! I mean, some of it was garbage time, but Jeffery still made some amazing catches. Defenses are going to start respecting him, meaning Marshall should be open more often.

The Saints are obviously a better team at this point. It also means that the Bears can’t overcome offensive turnovers if their defense doesn’t create any. The Saints converted first downs and kept their offense on the field. Chicago made a few stops when they needed them, but the offense couldn’t capitalize and put points on the board. Allowing only 26 points to the Saints is a respectable effort, but scoring only 18? The Bear defense had to play perfectly in order for that number to be enough. They didn’t, and now Chicago is 3-2. Still, I don’t fault the defense for much. They gave up six points to the Saints in the second half. That left the door open for the possible comeback, implausible as it might have been. Now the Bears have a short week as they prepare for the 0-5 New York Giants on Thursday Night Football.