Well that turned into a car wreck, didn’t it? The Long-Battle had its dramatic moments, but the Chicago Bears couldn’t overcome an early deficit and fell apart late as they dropped their fifth game this season. Take my hand and let’s traverse this Gameday Review, okay?

Even after an early fumble gave the Rams the ball in the Bears red zone, Matt Forte rebounded and had a decent afternoon for himself. He had over 100 all-purpose yards yet again, the focal point of Chicago’s offense. Josh McCown probably had his best game this season in spite of his recorded interception, spreading the ball around to seven different receivers on the day. The offense made its mistakes, but clearly wasn’t the problem.

That. Effing. Defense. Kellen Clemens only had to complete 10 passes for 167 yards because the Rams gashed the Bears on the ground for over 250 yards. Jonathan Bostic was out of his gaps on running plays and failed to trail down the field on passing plays. The line didn’t see consistent pressure. And of course, they didn’t create any turnovers. That almost guarantees a loss. As does allowing a special teams touchdown from Tavon Austin.

Honorable mention to Michael Bush. Seven rushes for -5 yards. That dude can get cut now.

In the first quarter. Giving up 21 points in the opening period meant the Bears were behind the eight ball and had no chance to make this game truly competitive. Thanks defense! 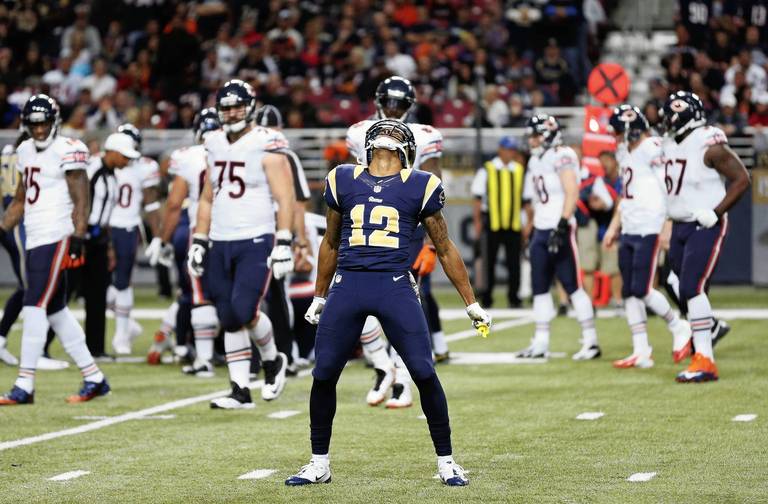 – So there was a small skirmish in which Kyle Long got all physical (of course) and Chris Long came out and pulled his brother out of the fracas. There were three penalties called on Chicago, one intentional grounding and two unnecessary roughness calls. It happened on a third down, so I was wondering why (other than a bit of field position) the Rams would decline the IG. I mean, don’t you always take the loss of down?

-Marc Trestman’s call to go for it on fourth and goal in the middle of the third quarter? That says he doesn’t trust the defense. At all. He had plenty of time left, so he probably should have just kicked the field goal and made it seven points. Instead we got freaking Michael Bush getting tackled in the backfield. WHERE WAS THE BLOCKING?

– A 61 yard TD by Devin Hester called back by a blocking penalty, an earlier TD by Matt Forte was nullified by a illegal block, and a holding call brought back a scoring throw to Martellus Bennett in fourth quarter. Now, Chicago eventually made good on two of these scoring opportunities, but that’s a lot of points that had to come off the board. These penalties are getting out of hand for a team that was extremely disciplined earlier in the year.

-The Rams had to deal with poor penalties of their own, when a terrible Roughing the Passer call on Brockers negated a strip-fumble TD, which the Bears turned into a score of their own. However, the Rams got their strip/fumble/score later in the fourth as the Bears were driving with just over two minutes to go. Karmic imbalance corrected.

With Detroit’s upset loss to Tampa Bay, the Bears are still sorta tied for first place in the NFC North (meaning both teams are at 6-5 but the Lions hold the tie-breaker). Chicago’s defense is obviously atrocious and will continue to be an issue down the stretch. The offense has to correct its penalty-laden play and start putting up points in bunches. Scoring 21 points just won’t get it done anymore. Ain’t that a switch.

Stay strong Chicago fans. The season isn’t over by a long shot. Bear Down and Happy Jay Cutler Day!