This midseason showdown of divisional foes came down to the wire, but the Chicago Bears fell to the Lions at Solider Field Sunday afternoon. Jay Cutler’s groin injury flared up, but the QB was left in for most of the game to battle through it. But it was Josh McCown who failed to tie the game with seconds left on the clock. Let’s start this Gameday Review!

In the first half the offense was extremely effective, as was Cutler. He was 12 out of 18 in the first half, to go along with a passing touchdown to Brandon Marshall on an opening drive that looked as good as any this season. Chicago moved the ball well enough to keep the game close, only down four at halftime. I’ll give the defense a little credit too. They gave up a lot of chain-moving passes and let Reggie Bush run at 7.5 yard clip, but giving up only 21 points has to be deemed an improvement.

In the second half, Trestman’s offense stalled out and failed to convert third downs and stay on the field. The running game was atrocious, netting only 38 yards on the afternoon. On a day when your quarterback came out of the half gimpy, Matt Forte needed to end up with more than 17 carries. 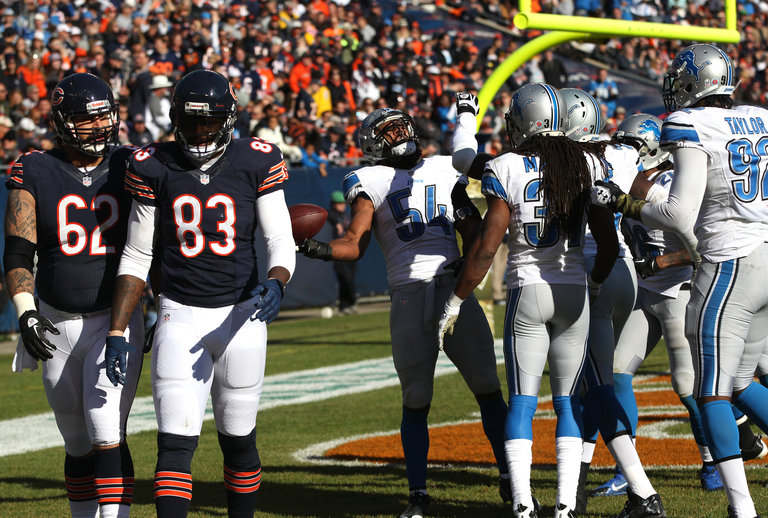 When Chris Conte picked off a high-thrown pass from Matthew Stafford early in the fourth quarter, he brought it back inside the Lions’ ten yard line. On first and goal, Jay came out and handed the ball off to Forte, who angled his run towards the left sideline for an easy touchdown… only it was called back due to a holding penalty on guard Matt Slauson. Trestman had to settle for a field goal on that drive, making the score 14-13, Lions. Failing to score seven on that series let Detroit off the hook and allowed them to recover.

-I might hate Michael Bush now. He comes in for short-yardage situations… only to fail miserably. The defense always knows he’s going to get handed the ball up the middle, and he’s easily stopped. At least with Matt Forte the Bears have some options.

-Brandon Marshall and Alshon Jeffery continue to be fantastic on the outside.

-My quarterback’s hand had a lump on it. Was his knuckle broken? Did he jam it? IS IT CANCER? WHY DOESN’T SOMEONE TELL ME ANYTHING????

-Along the same lines, I know everyone will be up in arms over Trestman leaving Cutler in the game for as long as he did. And I’m not necessarily disagreeing. He was great in the first half, but Cutler’s injury clearly tightened up during halftime and he wasn’t 100% coming out of the tunnel. I understand letting him test it out and gauge the pain level, but Cutler was getting the hell knocked out of him on nearly every play and coming up hobbled. McCown needed to come in earlier, and that’s poor player management by the coaching staff. It’s not Cutler’s job to “take himself out” of the game. Almost no professional athlete will do that unless they’re completely debilitated. So don’t blame Jay because the coaches didn’t see what everyone else was seeing. And then for him to exit the game on the final drive, leaving McCown to try and rally? That’s asking a lot of a back-up quarterback. McCown led them on the TD drive, sure. But that’s not the norm.

-Seems like the refs allowed DeAndre Levy to hit Alshon Jeffery after he was already tackled on a play in the fourth quarter. Huh. I didn’t know this was Mutant League Football.

The best of games.

It obviously means they’re behind the eight ball when it comes to the NFC North race. Losing twice to the Lions means Chicago will need to leap-frog them in the standings, because the Bears won’t be winning any ties. They have winnable games coming up, but Jay has to be completely healthy before Trestman puts him back out on the field. At 5-4, the Bears are just on the outside of the current playoff standings. They’re not done yet.