What a scrum that was! The Chicago Bears went to Lambeau Field Monday night, taking on Aaron Rodgers and the Green Bay Packers in a primetime showdown. An early injury dramatically to Rodgers dramatically altered the game’s events, allowing the Bears to hold on and earn the victory. Rather than go through a wordy recap of the game’s action, I’m just going to get to the bullet points in these reviews from now on. Enjoy!

Matt Forte was all over the field Monday night, totaling 125 rushing yards and 54 yards receiving. He got room on the outside thanks to fantastic blocking from Alshon Jeffery and Brandon Marshall. Josh McCown had an admirable game, even if he didn’t complete passes at a high percentage. He was comfortable in the pocket and made some accurate reads of the defense. 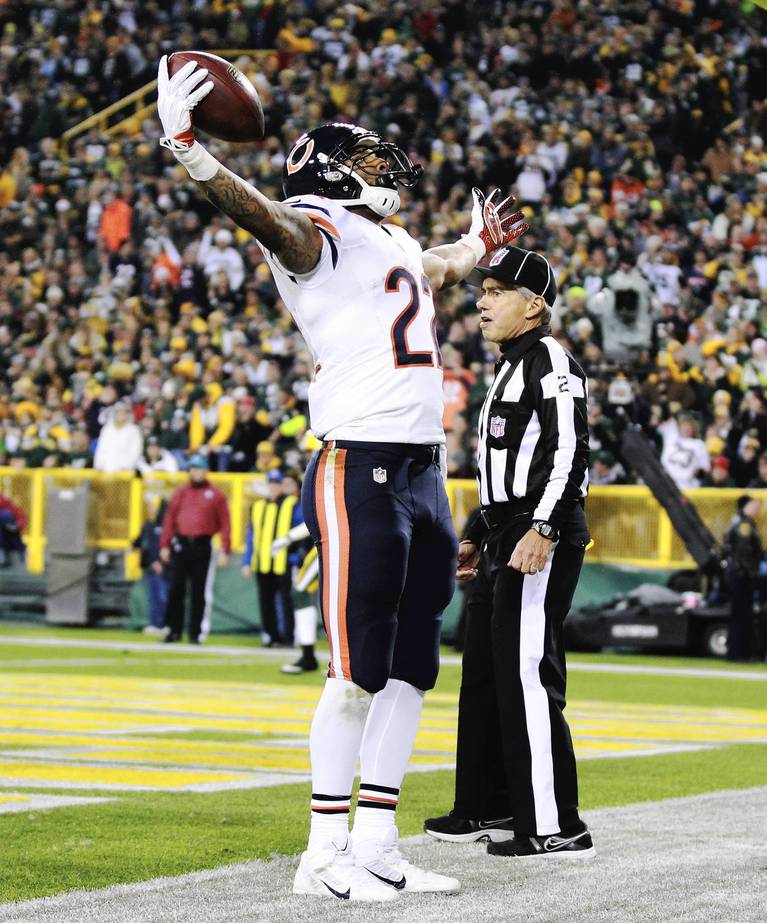 The Bears’ pass rush got their groove back as well, notching four sacks on Seneca Wallace to go with the one sack that put Aaron Rodgers out of the game. Julius Peppers finally showed up, racking up one sack, one tackle for loss, and two pass deflections. Shea McClellin got BIZ-ZAY with three sacks on the night (likely the best game he’ll have as a pro). The rest of the defense? Not so great.

Chicago’s run defense was atrocious. The defensive line couldn’t control their gaps. The linebackers were out of position and bit on play-action from SENECA WALLACE. The corners didn’t tackle well at all. And the safeties? Get out of here. Chris Conte couldn’t have stopped Eddie Lacy with 20 extra pounds. Lacy totaled 150 yards and one TD on a night when he became the clear and obvious target.

It was the first drive of the game, when Aaron Rodgers went down with an injury. Let’s face it, if he doesn’t leave the game with a shoulder injury (reportedly a fractured collarbone), the Bears don’t win this game. I don’t care who our starting quarterback is. I’ve already seen a lot of Bear fans getting surly about Packer fans using Rodgers’ injury as an excuse.

Newsflash y’all: IT AS AN EXCUSE. And it’s a perfectly viable one.When you lose the best quarterback in the league (who makes all of Green Bay’s scrub receivers and sub-par offensive linemen look way better than they should), it’s going to be a vastly different outcome. Seneca Wallace hasn’t taken a meaningful first-team snap for a team in what, five years? The drop-off is considerable, and the Bears still only won by seven points. Let’s not get too cocky here. It’s unbecoming.

-Stephen Paea officially “sucks my sister’s balls.” He missed tackles in the backfield, committed an early facemask penalty, and failed to get his effing hands up on one of Green Bay’s late punts. (Which he would have blocked.) Getting Jay Ratliff in this rotation will do wonders, methinks.

-Josh McCown made himself some money tonight… for 2014. A performance like that almost guarantees him a spot as a back-up on someone’s roster next season, even if it isn’t in Chicago.

-Rodgers will be out about three weeks, at the very least. Vince Young, Tim Tebow, and the now-released Matt Flynn are being bandied about as possible back-up signings. More realistic? The Packers elevate Scott Tolzien from their practice squad. (It’s done.)

-Before the game Mort Schefterson (ESPN’s Chris Mortensen and Adam Schefter) reported that Jay Cutler is likely going to start Sunday’s game against Detroit, barring any setbacks. With this win over the Packers, this Lions game isn’t as do-or-die, so I don’t want to see Jay rush back. That being said…

The defense still has HOLES. LOTS OF HOLES. They gave up 20 points to Seneca Wallace. Seneca. Wallace. But Josh McCown used the bye week and all that practice and won the battle of back-up quarterbacks. Well done Joshy. And let’s thank Marc Trestman for his ballsy fourth and inches call before that clock-sucking drive in the fourth quarter. Trestman put his team in the very best position all night long.

But this win really means that the Bears are in a three-way at the top of the NFC North. (And not a good three-way, either.) Chicago has beat Green Bay, who beat Detroit, who beat Chicago.

It’s not gay in a three-way.

And this Gameday Review is ovah! Bear Down and Happy Jay Cutler Day!