Losers of two straight games, the Chicago Bears are falling out of the playoff race. But a loss for Detroit on Sunday means Marc Trestman’s squad isn’t out of lives yet. Once again, they must play without starting quarterback Jay Cutler, who practiced some during the week but isn’t ready to return from a high ankle sprain. That means Josh McCown is on primetime Monday night as “America’s Team” comes into Soldier Field. It’s time for a Gameday Preview!

What you need to know about the Cowboy franchise:

Owned by tycoon/crazy controlling old guy Jerry Jones, Dallas is the most valuable franchise in the NFL and has been for some time. Jones is not only their owner, but their GM as well. This means he’s made some terrible football moves, but doesn’t get the shit that Washington owner Dan Snyder does because Jones doesn’t have a racist team name. Every American loves a Cowboy!

Also, they have great cheerleaders… that won’t be on TV Monday night. Wah. 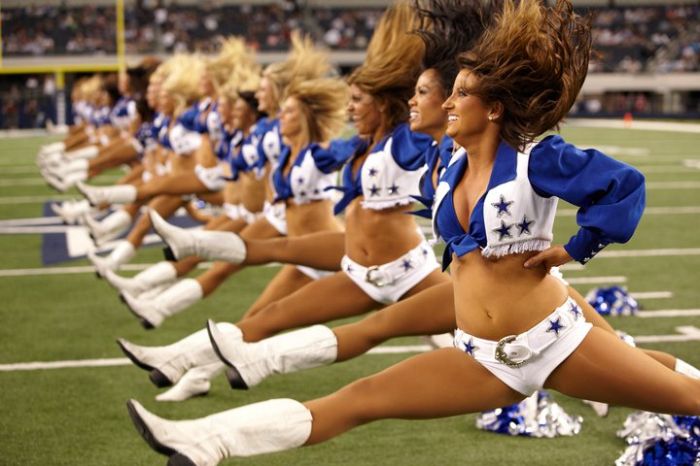 This is the only way you’ll see the Cowboy cheerleaders this week.

Tony Romo is essentially the Dallas equivalent of Jay Cutler, only he actually has the problem of Hall of Fame quarterbacks coming before him. So Cowboy fans have a legitimate history to compare him to, unlike Bear fans, who would have no idea what a real quarterback looks like. (Sorry, they don’t. This is why they hate Jay so much.) Despite Romo’s postseason woes (which are well-documented), he is one of the best regular season quarterbacks in NFL history. He’s made plenty of insane plays this season and played Peyton Manning evenly earlier in the season during Manning’s hot start. He’s going to put up stats unless the weather really bothers him on Monday Night.

Dez Bryant. Jason Witten may be Romo’s wubby, but Bryant is one of the most dangerous receivers in football. He’s T.O.-like in his ability to pick up yards after the catch. If he has a huge day on the grass at Soldier Field, it means the defense isn’t doing anything right.

Sean Lee and DeMarcus Ware would be easy (and justifiable) picks here. But defensive tackle Jason Hatcher has racked up nine sacks in 2013, impressive for a man in the middle of the defensive line. If he’s getting pressure in McCown’s grill, the passing game will be in trouble.

Keep Tony Romo in the pocket and don’t let the Cowboys even think about getting their running game going.

Yeah, if the “key to winning” involves stopping the run, the Bears can’t do it. I hate to pick against my team for a third straight week, but the Cowboys should get the road win.

All of them. At 6-6, the Bears are on the precipice. They need to win and overtake the Lions in the win column or they have no chance to make it into the playoffs. That means this game matters. And it’s in primetime, which means I have no idea what Bears team will show up.

Okay everyone, get ready for a Monday night showdown! I’ll be tweeting up the game @MostlyAvgJoe! Bear Down and Happy Jay Cutler Day!