With a win over the Giants in their rear-view mirror, the Bears now turn their sights towards another NFC East team, the Washington Offensive Names. Washington started off their 2013 season giving up an epic amount of yardage, but have since settled into a not-quite-so-epic level of sucking on the defensive side of the ball. Can Chicago’s surging offense take advantage? Let’s get into the match-ups in this Gameday Preview!

Jay Cutty and this delectable offense could have their way with Washington’s defense, if they don’t turn the ball over too much. Let us not forget that one terrible afternoon years past when DeAngelo Hall picked off Jay Cutler 6,852 times. ‘Twas a horrendous shit-show. NEVER FORGET. This year, things are different. Hall can still make a play or two on the ball, but he doesn’t have the same catch-up speed. He’ll be attached to Brandon Marshall for most of the day, more than likely. Jay will have to ease coverage away from Marshall by getting throws in to Alshon Jeffery and Martellus Bennett early.

But that won’t be Chicago’s beast weapon today. If Matt Forte isn’t a threat running the ball to the outside, you should all be disappointed. Washington is 27th in the league in run defense, giving up over 123 yards per game on the ground. It’s time for Kyle Long and the rest of this offensive line to get overly physical and take it to this Washington defense. I’m looking for 130 total yards from Forte. On the outside, the Offensive Names have Brian Orakpo and Ryan Kerrigan to rush the quarterback. With eight sacks between them, they’re the likely candidates for double-blocking.

Washington’s offense is made dynamic and dangerous when quarterback Robert Griffin III is healthy and at his best. The read-option they’re employing means he could be a designed running threat whenenver he feels like it. And last week was his best game running the ball, so Chicago has to be ready. Washington’s offensive line isn’t all that bad, so the Bear defense (the way they’ve been playing lately) probably won’t even sniff Griffin until he’s past the linebackers. Griffin’s accuracy looks to be improving after his knee injury as well, because he’s stepping into a lot more of his throws.

Keep your eyes on Pierre Garcon, who is Griffin’s favorite target BY FAR. He has double the amount of targets as anyone else on the team. Garcon isn’t a world-beater that could rack up 190 yards on them, but the Bears should probably not lose track of him. Maybe if Tillman’s not too busy, he could punch a few balls out, knowwwhatimean? And crazily enough, Santana Moss is somehow still on this team and catching passes. He was a threat six years ago, I swear. (He still averages 12.6 yards a catch. WTF.) Alfred Morris and Roy Helu combine to make a backfield that could give the Bears fits if they don’t freaking tackle. (You know, that thing they haven’t been doing for weeks now.)

Fred Davis is still at the tight end spot, but he’s only snagged three catches this year. I doubt he’s about to blow up. Washington does really like rookie Jordan Reed, who will get between four and eight targets on the afternoon. He’s a speedier option than Davis and worth some attention.

This game has moved to even odds somehow. It’s a pick ’em! (No respect for Chicago on the road. I understand.)

Washington’s defense is crazy bad. Chicago’s offense is pretty good. Give me the Bears to win on the road. Look at that sexy analysis. You loved it.

Look, I was up pretty late last night. If I don’t just comatosely stare at my TV for three hours aside from the occasional tweet, I’ll be stunned. I’m gonna just hang out and enjoy the sitting and pretty pictures.

This dog knows what I’m talking about.

Don’t get punked by a 1-4 team. It’s just bad form. And try to keep me entertained, mkay? Before I fall asl……. 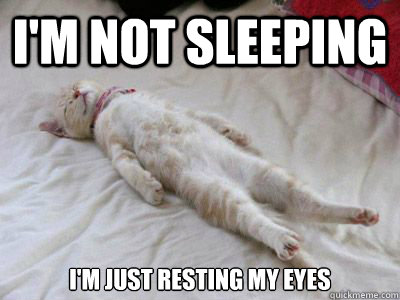 Okay, that’s it. I need to eat… or sleep. Or wake up. Any of the above. Enjoy the game, friends. Bear Down and Happy Jay Cutler Day!